What is the preferred way to denote the Pythagorean theorem equation?

How should I write down the Pythagorean theorem equation?

I know it is context dependent, but say I want to calculate the length of the diagonal in a rectangle, or say I just want to refer to the Pythagorean theorem in general.

Edit: Based on the comments I would also like to suggest

I assume that the students have already seen and worked with the statement of the Pythagorean theorem in some variation before.

The formula $a^2+b^2 = c^2$ is common knowledge and the words for hypotenuse and leg (is "cathetus" not used in English?) are basic mathematical vocabulary. Including these seems a good idea.

Connections to other mathematics

The notation with AB, CA and BC might be something the students have used or will use in less analytical geometry. Maybe you have an opportunity to mention that other context or tie these together, now or in a geometrical context.

Using some formulation without too much jargon is recommended; all the variables might be as much nonsense for some pupils, so this speaks for including some formulation that uses more natural language. This would also give you the opportunity to discuss why we use letters as variables in place of words (note that this is commonly not done in programming, for example; mathematics is peculiar here and an explanation might be order).

This also suggests avoiding needlessly difficult notation like subscripts, unless you feel that the students could use practice there and are ready for it, and would not have too much difficulty with Pythagoras. All extra cognitive load makes learning the main subject harder.

As mentioned Chris in his answer, $h$ already has a different meaning in the same context, so you might want to avoid this. Think backwards and forwards to see if there are other unfortunate notational conflicts.

What does the curriculum that binds you say, if anything? Or maybe some other relevant guidelines. They probably don't go into this much detail.

What does research say?

You might want to a quick literature search on for example Semantic scholar (or other academic search engine of your choice), search for something like "pythagorean theorem didactic", pick the first few articles that are accessible and seem relevant, skim through them and check if they discuss the matter of notation or link to something that discusses it. It is very possible to not find relevant stuff right away, but worth a few minutes, at least.

You can spend as much or as little time as you want on this, but at least skimming an article or two might also give other ideas on your teaching, so why not?

You have to check how much time you have and what the most important concerns for your students in the situation you are in. You can't do everything.

In Olympiad geometry, $a$, $b$, $c$ is the so-called standard notation for the sides of a triangle, so it makes sense to use it consistently when referring to a triangle (in isolation). However, in any case the general principle is introducing all your notation. Writing

is sloppy and should be avoided. Try to force yourself to take the high road and write

If you are using the formula in a longer problem involving a rectangle, usually there is already notation that has been introduced earlier:

Two alternatives I have seen used (am not necessarily recommending them, but will list some pros and cons) which don't seem to have been mentioned yet.

Don't denote it algebraically at all! Draw a picture instead

For the lower end of the 12-16 age range, I've seen this work really well. You literally draw the squares sticking out from the triangle. Write the areas of the squares inside the squares. The two smaller squares add together to make the big square. 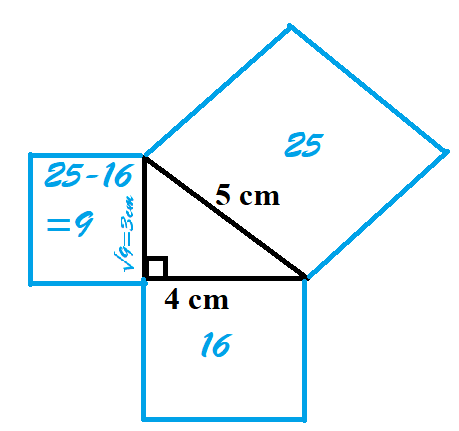 Clearly if you want students to deal with more advanced material later, you can't stick to non-algebraic approaches forever. But I think "just draw a picture" is at least worth considering as an introductory teaching strategy for younger or less confident groups, for the first year that they see it. A potential time to switch to an algebraic notation might be when trigonometric ratios are introduced, since by this stage you probably want to be applying algebra to triangle problems. I say "probably" rather than "certainly" because there are, in fact, advocates of using non-algebraic approaches even to sin, cos, tan, e.g. by using "formula triangles". Again, this has pros and cons. But if you are going to label the sides of a right-angled triangle as the adjacent, opposite and hypotenuse, this gives you an alternative way to write the Pythagorean theorem.

Denote the two legs as the adjacent and opposite

For example, if you use three-letter abbreviations for the sides, you can put:

The only one of these that looks objectionable to me is the one that calls the hypotenuse $h$, since in a triangle the letter $h$ usually refers to the triangle's height (which could be either one of the legs but could not be the hypotenuse).

Whatever you choose, make sure to follow some basic rules:

Being sloppy at these topics creates lots of problems later on (students just guessing when to apply some formula, students not understanding the notion of a variable, ...).

I really wish people would stop teaching the Pythagorean Theorem as $a^2 + b^2 = c^2$, for the following reason: Give your students the diagram below, and ask them to solve for $c$. At least 1/3 of a typical high school class will write $a^2 + b^2 = c^2$ and report back to you that $c = 5$. The problem is that the equation $a^2 + b^2 = c^2$ is so memorable, so ingrained in them, that automaticity kicks in and overrides any consideration about what the letters actually are supposed to refer to. I much prefer a semantic description such as $$(\textrm{first leg})^2 + (\textrm{second leg})^2 = (\textrm{hypotenuse})^2$$ 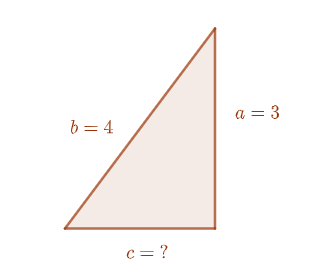 I prefer to state it the traditional way, not involving multiplying a length by itself, but involving areas of those polygons known as squares.

Draw two lines at right angles to the hypotenuse at its two endpoints to get two sides of the square other than the hypotenuse itself, and draw the fourth side, and there you have a square, whose area is the sum of the areas of two squares having the two legs as one side.

Not the answer you're looking for? Browse other questions tagged secondary-education geometry notation middle-school or ask your own question.

9
What is the best way to teach compound interest in high school?
19
Good way to explain why an absolute value in an equation does not automatically mean to make the other side +/-
18
Should my 8th graders see a proof of the Pythagorean Theorem?
24
Why do we care about multiple proofs of the same theorem?
19
Why are $m$ and $b$ used in the slope-intercept equation of a line?
7
The Way We Teach Square Roots
6
What are strategies for teaching that the altitude of a right triangle creates two similar triangles?
13
How to teach the Pythagorean theorem in a satisfying way to high school students?
4
Should I avoid writing: $ 11:40 - 15 \text{ min} = 11:25$, and what are alternatives to this way of writing?