U.S. News and World Report publishes school rankings for many different disciplines, including mathematics. Is there any ranking for mathematics education graduate programs?

Weaker question: Is there a guide to selecting a math education graduate program, including a reasonably comprehensive list of programs?

Is there a guide to selecting a math education graduate program, including a reasonably comprehensive list of programs?

Here is a List of Links to U.S. Doctoral Programs with a focus on Mathematics Education.

The linked google spreadsheet was generously compiled by Kenneth Bradfield with the assistance of a few others (click through for attribution) and contains the following headers:

At the time of this update, there are 110 different institutions listed.

The most recent approximation of rankings (of which I am aware) is available here.

Note that it only concerns the United States, and that the article is from 2007. Its citation is: 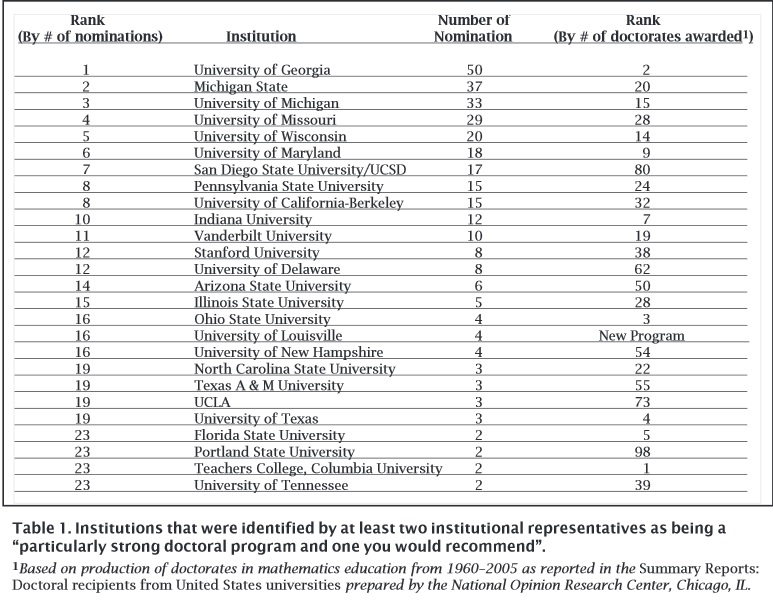 Disclaimer: A fair amount has changed in the intervening years, and there are surely more changes in store for the future. Moreover, the value of a program will depend in some major way on the professors with whom you work, and the subject of your research. It may also be worth noting that the demand for those with doctorates in Mathematics Education is quite high (Inside Higher Education 2013 piece and related AMS notices 2013 pdf) and federal funding seems to be increasingly available for work in education (at the graduate level: an example is the extension of the NSFGRFP to STEM Education). Lastly, it seems clear that the Common Core State Standards (2010) and the retirement of older faculty members (who are prominent at some of these institutions) are both likely to have influenced these rankings.

FWIW: Since the National Science Foundation began granting fellowships for graduate research in Mathematics Education in 2011, students at the following institutions have received them:

Different people have different philosophies of education. You will want a program that reflects your own personal philosophy. I would recommend reading online discussions about math education, and find someone whose ideas move you. If that person is at an institution whose program you like, go there. Do not worry about "best".

As the comment by @JPBurke says, your criteria will be different than some blanket ones by a periodical for mass consumption.

To look for a program to join, look for a potential advisor or group. Look for people doing work in areas that interest you, check out their webpages, see if they belong to a group working together. This should narrow it down nicely. With a handful of options, check their graduate schools (admission requirements, and other miscellanea like housing and such). See if you can contact (past or present) students to get first-hand impressions.

Note that some programs in pure math allow one to receive a Math PhD with concentration in Mathematics Education (or maybe even a Math Ed PhD?). Being the Northeast USA, I happen to know of the University of Connecticut.

I think that UNH also allows one to "slide over" from a Math PhD program to Math Ed, though I'm not sure how formalized that is, and so "ranking" might be a relative concept here. I suspect there are other programs that would fall under one of these categories which may not make it into lists in the same way.

This isn't a direct answer to your questions, but nonetheless I hope it can help answer the underlying question of where to look for such programs.

Not the answer you're looking for? Browse other questions tagged reference-request graduate-education or ask your own question.

16
Is there any evidence about the effectiveness of "table proofs" in pre-college mathematics education?
22
Teaching and "The Two Cultures"
14
The interplay of memory and mathematical performance
9
What courses should be a part of a Mathematics Education degree program?
9
Learning modulo sticking points, or "fluid study" in mathematics
19
Hands on activities for a college history of mathematics course
7
Why is multivariable analysis often omitted?
6
References for graduate education
6
Is there any high school level summer program that teaches Analysis?