My 10 year old daughter is trying to read this book — please explain in Simple English that she'll grasp. Kindly see the embolded phrases below. The author doesn't expound why the 3D "mental pictures" are "usually enough". Scilicet, why doesn't "this impoverished vision" hinder high-dimensional geometry, or at least deprive or forestall you from learning all about it? 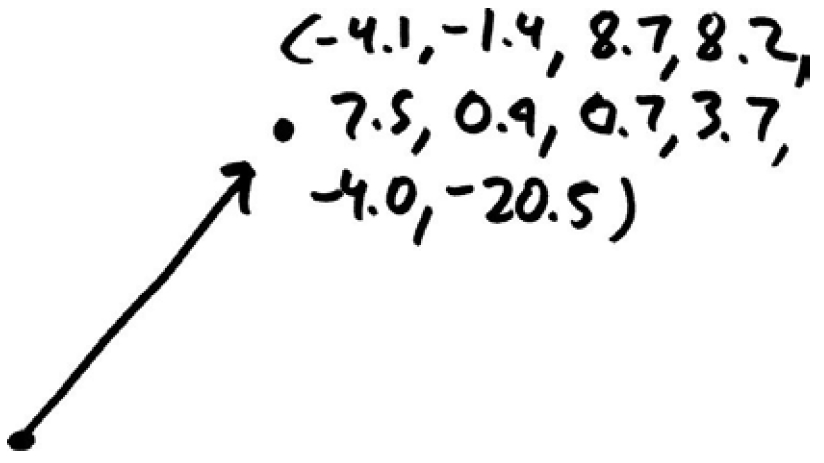 Well, to start, "usually enough" is ambiguous enough to allow a bit of wiggle room. That said, there are plenty of times where knowing how dimensions 1, 2, and 3 act to start to see the special cases break down and see the general pattern. For example, Jordan is hinting at vector spaces in the cited section. Dimension 1 is a special case where vector addition is just regular addition, but when you move to dimension 2 you start to see that there is something different going on. e.g. You can't do things like multiply 2D vectors like you could in 1D. (Or at least, there isn't just one way of doing it. You can multiply component-wise, or view them as complex numbers, or use the 3D cross product or inner product to get a scalar result, etc.) Once you keep on going to 3D, some more of the stuff particular to 1 and 2 dimensions falls away. 3D has its own peculiarities, but there is a continuous core set of facts/axioms that keeps on going "all the way up" forming the concept of a vector space. Some parts of this core even continue to infinite dimensional spaces.

Now, you can't expect this core set of vector space axioms to tell you everything. Those California temperatures are probably a time series and the images have a 2D spatial structure and these structures aren't captured by viewing them as raw vectors. But that's all structure that they have in addition to their vector structure, not instead of. i.e. We have some sort of foundation on which to build.

Part of learning to do higher dimensional geometry is learning which aspects of your low dimensional intuition are good or not. I can't visualize two smooth $2$-planes meeting transversely at a point, which I know happens in $\mathbb{R}^4$. But I am experienced enough to know that, when thinking about dimensions and transversality, I need to compute, because my two and three dimensional experience will lead me astray.

Similarly, my visual intuition tells me that the diagonal of a unit cube is only a bit longer than the side; certainly not more than twice as long: But in 1,000,000 dimensional space, the diagonal is 1,000 times the side length! Again, I have spent enough time on high dimensional computations to know that I need to compute with the Pythagorean theorem when I have a high dimensional vector with many nonzero entries, because all those small squares can add up to something big.

I think part of Jordan's statement is based on the fact that he is experienced enough to know where the traps are, so what remains seems clear and trouble free.

Because the 2/3-dimensional visualisations are equally unnecessary. Some mathematicians who naturally think along visual lines find them a useful way to structure their thoughts, but (for mathematicians not still in the pre-formal stage of their development), it's just a tool to help them reason about some more formal system. Other mathematicians do not use such tools (for example, those of us with aphantasia certainly do not), and so the visualisation cannot be essential to the process.

If you want to show the detailed displacement pattern of a cantilever beam you can use the mode shape vector. In 1D, the mode shape vector of 6 degree of freedom (DOF) lumped mass cantilever beam (which is basically a line with 6 mass points dots) will contain 6 entries. Each entry suggests the position of a lumped mass point (DOF). If you use only 2 mass points (DOF), you get just two values and can show an inclined line. But that would be way too erroneous. You could use 3 to 4 dots and get a very good approximation though. In this case, the structure is 1D. But the deformation vector goes up to 6 Dimension? So I think, vectors only contain refined information in a mathematical sense. 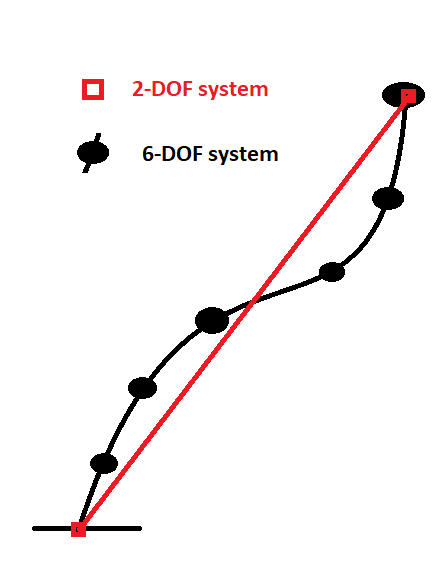 The photo example is similar. Lets say there are 10000 pixels in the image. Assume a red apple and so each of these pixels are filled with red color and its variants. If you want to show a green apple you fill those pixels with green and its variants. But there will still be only 10000 pixels. And the pixel positions are still the same. So if you want to explain this through vectors, each pixel would need 3 entries: $$\{\textrm{x coordinate},\textrm{y coordinate},\textrm{intensity of red color}\}$$ In this case, the position of pixels determine the shape of the object. Once the positions are fixed, we need colors to differentiate. Colors are only adding more information. Similarly higher dimensions add only more information.

Physical dimensions are only 3. And that's it. Period. There are no higher dimensions in the physical realm. It's a dangerous lie when someone says they are able to visualize 10-dimensional physical space. The extra dimensions can be seen only as additional details/information such as: details/time/temperature/color/etc.

35
Why are triangles so prevalent in high school geometry?
8
How do you explain straightness to a 5-year-old?
4
Can we define length and perpendicularity not via an inner product?