Want to improve this question? Add details and clarify the problem by editing this post.

Someone asked me this question today. Why do you honestly believe that high school math test scores in America (particularly the United States) are low compared to other countries? I thought about this question a lot, and I honestly think it has to do with another question and that is the following:

Why has there been a rapid decline of responsibility for students in the United States of America? What inspired this movement? Was it parent-driven? Was it student-driven? Was it stress-related and done for emotional reasons? Was it about equity? There has to be a reason for it, and I can't put my finger on it.

There has been this gradual decline of responsibility for students to do anything now which has led to this deficit. There is no demand to do problems 1-30 and 40-55* (odds) anymore. Turn your homework a few days late. No worries or responsibility there! We now allow retakes on all assessments and don't hold students responsible to study and do well the first time. There was this big retake your test to understand the material movement when I was in school, and there was no responsibility for students to study the first time to do well. Now, there are no more timed tests for multiplication tests; you can count on your fingers and understand (6)(3)=18 because you have to understand six groups of three is eighteen. There's no responsibility to memorize that! Other countries have stepped up their homework, timed tests, and responsibility. In America, we don't hold students responsible for retaining any common sense math skills based on pop quiz assessments like we used to. I find continually that students don't know what basic terms are such as mean, volume, and really trivial math skills as there is no responsibility for students to memorize and retain these facts at a young age via our assessments. Instead, we just assess one common core standard a day and call it good at that. You also can get a 4.0 with proficiencies and get 4 questions wrong. So, again my question is why has there been this shift away from this responsibility?

Some of us would point to political pressures to evidence higher "success" in terms of increased graduation rates, which wind up pressuring institutions to reduce standards and pass students regardless of whether they've mastered material skills or not.

Note that U.S. high school graduation rates have been spiking upwards in recent years, which provides opportunities for systems and states to congratulate and defend themselves: 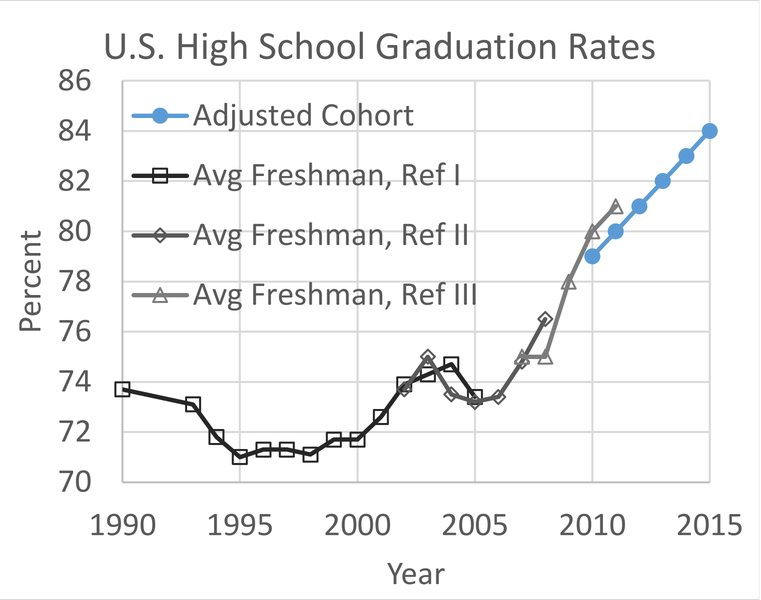 Image from Wikipedia. Note this is in the context of an article discussing how college graduation rates are failing to increase significantly in the same time frame.

Here's an article on the CUNY (City of New York) University Faculty Senate blog in 2017 summarizing this trend towards higher-graduation-from-high-school, but lower-preparation-for-college rates, with a number of interesting links for further reference:

Both the State and the City of New York have recently reported a rise in high school graduation rates. But college preparedness still leaves much to be desired. It presents a major challenge for colleges that admit students whose reading, writing and mathematical skills are not at the level needed for academic success.

Close to 80 percent of the Department of Education (DOE) graduates entering CUNY in the Fall of 2015 needed remediation of some kind. While the NYC DOE cites a 79 percent graduation rate as evidence that schools are improving, only an average 37 percent of students graduate college-ready...

Both the State and City have been altering their standards for graduation to boost those numbers. Now CUNY has changed its requirements and methods for placing people into remedial classes.

What this portends remains to be seen for students just entering into credit bearing courses with skills that are even lower than in the recent past. One strategy is to provide a non-algebra path to a degree. Such intellectual skills and mental habits as might be inculcated by the mastery of algebra are thus being set aside in the hopes that those no longer burdened by graduation requirements including algebra will graduate and find some sort of employment.

Indeed, since that blog post was written, CUNY has waived the requirement for an elementary algebra skills test (at roughly the 9th grade level) that was previously required for graduation -- precisely because it was found to be impossible to structure such an exam in a way that everyone would pass it. Moreover, they've eliminated all entry-placement tests and remedial courses (leading the way among other large institutions in the U.S.); this disposes of the embarrassment around the "percent [who] needed remediation" number, as it simply doesn't exist anymore. And they've declared by fiat that all students will be entered to college-credit bearing classes regardless of skill level. For example, from a 2019 university memo on the new "corequisite" course model (emphasis as in original):

The college must allow enrollment of students who are not skills proficient.

Scherer & Anson in their book Community Colleges and the Access Effect make the point that high schools practically guaranteeing graduation, and community colleges guaranteeing acceptance via open admissions, set up students to not perceive hard work as a requirement (Chapter 8; quoting from Skelly & Laurence, "Tracking College Readiness", The School Administrator 2011):

Community colleges’ open enrollment policies have a negative effect on student motivation during high school particularly during the senior year. Seniors going to a “JC” (junior college) know their admission is guaranteed, so they often slack off and avoid challenging course work, particularly during their senior year. The bad habits formed in high school are not easily shaken.

In light of this perceived end-game to the political pressure for increased graduation rates (previously at high schools, and now at least at lower-level, public-funded colleges), we might reflect more generally on what is known as Campbell's Law:

The more any quantitative social indicator is used for social decision-making, the more subject it will be to corruption pressures and the more apt it will be to distort and corrupt the social processes it is intended to monitor.

Not the answer you're looking for? Browse other questions tagged secondary-education mathematical-pedagogy usa or ask your own question.

29
What fraction of the population is incapable of learning algebra?

27
Why does high school teaching in the USA require a teaching certificate while college/university teaching does not?
17
How does the workload of a high-school mathematics teacher compare to a university-level instructor?
23
Why aren't logarithms introduced earlier?
8
Adoption / penetration rates for dynamic geometry software in secondary school
16
Worldwide collection of final examinations in mathematics
10
When and Why are different division symbols taught?
3
How actually are prime numbers taught in elementary school in United States and how easily do students learn what they're being taught about them?
2
Is the AMC 10/12 Test the Difference Maker for Top Schools? What do Colleges Look for?