Can anyone comment knowledgeably on this intriguingly titled book? I have received publisher's promotional materials (as no doubt have many of you), but I know nothing about it.

Jason Padgett. Struck by Genius: How a Brain Injury Made Me a Mathematical Marvel. (Book link) 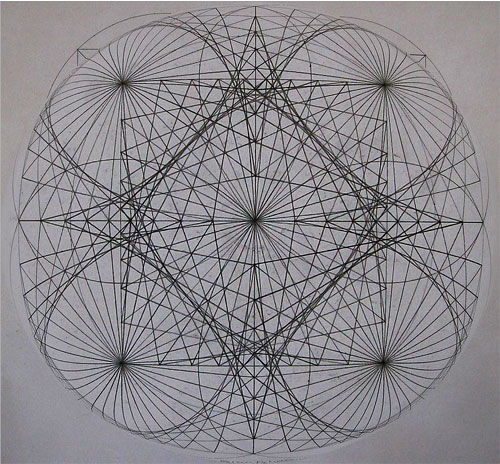 Edit 2: This story continues to reappear periodically in mainstream media; this month (April 2019) it was featured in a BBC Feature story here. The article title is:

The violent attack that turned a man into a maths genius

To reiterate my earlier answer: The pictures created by Padgett are (perhaps) interesting, but the media's intention to depict him as a "maths genius" is severely misguided and, in particular, demonstrates a widespread and continued lack of mathematical literacy.

Edit 1: In case anyone was concerned, Channing Tatum will star in a movie version of this book. Also, for those interested, Padgett's personal site can be found here.

You can find more information about him here. He has not produced any great ("genius") mathematical work, but he has taken up an interest in drawing interesting geometrical pictures. In particular, it appears that part of his brain was altered in a way that causes him to perceive fractal-like patterns (other parts of the brain now compensate for the damaged part). More generally, though, this is an excellent example of the lack of mathematical literacy on the part of the media.

An excerpt about this individual from an article in the NY Post:

During one of his meditations, he came to the conclusion that “circles don’t exist.” ... “It was like a bomb went off in my mind. In a matter of minutes, I was no longer just a receiver of geometric imagery or a researcher; I was a theorist,” he writes.

This is somewhat like when Time magazine wrote up a child who had learned some basic Calculus as having the potential to disprove Einstein's theory of relativity. A particularly unimpressive account of this story can be found in an LA Times opinion piece here. This latter write-up is very short, but I find the latter half of it to be especially offensive:

I always have the same question when I read one of these stories: Where are the verbal prodigies? A 12-year-old who can disprove relativity is pretty special, but so would be a 12-year-old who wrote a sublime sonnet or the great American novel. Yet you almost never see that sort of wunderkind on TV.

My theory: Producing great literature requires experience and reflection, not just an IQ of 170.

I added the emphasized text above because I find it quite unpalatable. "Pretty special"?! Moreover, the implicit idea that "an IQ of 170" is somehow what it takes to "disprove relativity" is preposterous.

Though there is no real story here, I thought I might direct you to an interesting source, given that you tagged the question with creativity:

In this book, Weisberg argues that (1) creative thinking is a type of ordinary thinking, and (2) one can effectively identify creative thinking with problem solving. He is the sort of author who writes in a scholarly way about creativity, and about whom much can be gleaned from his previous book titles (e.g., Creativity: Genius and Other Myths).

Finally: If you want more information about mathematical creativity (again, based on your tag here), then another place to look is an earlier MESE response of mine here.

Not the answer you're looking for? Browse other questions tagged creativity or ask your own question.

24
How can mathematics educators encourage innovation and creativity?
10
Creativity in mathematics
13
Moving From Rote Learning To Creative Thinking