Explaining how to study mathematics [closed]

Want to improve this question? Update the question so it focuses on one problem only by editing this post.

Today on the process of explaining how to study Mathematics to my students, I said that Mathematics is just like a language. To learn a language, first we have to know its alphabet, grammar, vocabulary, synatx and all the other things. Likewise, Mathematics is a kind of language with its own vocabulary, symbols, terms, definitions and theorems. To be successful in Mathematics, we must be able to to develop a decent vocabulary, use it as often as we can and speak and write in the language of Math. With that I emphasized on writing definitions, theorems and properties which I think will surely help them.

I think I am correct on those things above but I wanted to tell them more but I did not know what things to add. Do you have any suggestion? Probably on how student should see Math as? Or how should they can learn other theories that are not on their curriculum?

TL;DR: In my opinion this is not how it works. How to study math: Don't just read it; fight it!

There are many dissimilarities, and they show when one attempts to use standard natural language processing methods on math papers. To name a few, math is highly contextual, the notation is non-linear, deeply nested and the ambiguities reach a whole new level of quality (sentences like "I saw her duck" or "I see a man on the hill with a telescope" seem like a piece of cake in comparison). However, there is one key difference: math frequently redefines things. Just compare a few papers, and you see the same notation used to denote so many various concepts.

I know these are not the problems that humans have with math, I just wanted to argue why math is not just like any language. In fact, people doesn't have any problems with music notation, but similar arguments would work there as well; curiously notations for both music and math are semantic in nature, for example there are only slight difference between countries, like "h" vs. "b" notes or "$\leq$" vs. "$\leqslant$" symbols. Finally, I'm well aware that the above mostly concerns not the actual language, but its notation, that is, realization of the language on some medium; nevertheless, the connection between the language and its notation is so deep that the two can hardly be separated.

Yet, let's suppose that math is like a language, perhaps what is important to learning is common to both math and other languages. You continue with "To learn a language, first we have to know its alphabet, grammar, vocabulary, synatx and all the other things." However, is it how you learned to speak? Or was it more like a number of people (e.g. parents) would say to you some incomprehensible sounds and then after some time you would respond with "ga ga ga" and then they would smile, and slowly there would be some progress and after several years you would be able to express basic ideas?

I feel that I learned a lot of math from my parents, but they never introduced anything formally. Math was then essentially pattern recognition, predictions and hypotheses testing, and most importantly, a great deal of fun. Of course, I learned the vocabulary, tools, notations, and other concepts, but it was more by assimilation than explicit tutoring.

To give more recent example, every time I see students hear the formal definition of a finite state machine there are some horrified looks. In fact, "let XYZ be a $n$-tuple" became a running joke at our university. On the other hand, if students are shown how something works first (in computer science this is easy, because you can run programs, algorithms, show visualizations and many of those are intuitive once you see it work), then they have much easier time digesting the theory. It's much more effective to give several cases of recursive functions, simulate them on some small inputs, and then let the students play and figure things out by themselves, than, for example, introduce all the necessary ingredients step by step and then combine it all via formulas and induction.

This is even more true if you consider how mathematical theories developed across the centuries. The grammar which you want to introduce so early was not even there when most math which we know now was formed. For example, the foundations are recent developments and are not yet even fixed. In my opinion the evolution of concepts of integrals and derivatives much more resembles a child attempts to talk, than orderly introduction that is given in university courses. Yes, there is a significant difference between evolution of a concept and teaching it as we currently know it (we don't need to copy all the failed approaches, do we?). Still, I doubt that starting with the limit formula is a good way to learn derivatives.

I admit, that this only anecdotal evidence and not significant in any way. The more so, because of my bias, i.e. how I learned math in my early years. Yet, after reading pieces like the following paragraph by Paul Zeitz, one can only wonder...

A question of culture

When I was a grad student at UC Berkeley (in the late 1980s), it was understood, among my American classmates, that the Eastern Europeans were simply better. They weren't genetically superior; indeed, many of my American classmates, myself included, were themselves descended from Eastern European immigrants. And we knew that we weren't stupid. Many of us had excelled at mathematical olympiads, even at the international level. But at Berkeley, the Eastern Europeans -- students and faculty alike -- were known for their intensity. [...]

All joking aside, we fledgling mathematicians understood that the single important thing was not raw intelligence or knowledge. What mattered was passion. The way to become successful in mathematics, like almost every endeavor, is to care about it, to love it, to obsess over it. And in this, Eastern Europeans had a clear superiority, a cultural advantage. [...]

One of the many laudable practives around the world, one that resonates particularly well with the American mathematical community is the Eastern European notion of a mathematical circle. Most math circles have several features that distinguish them from simple math clubs.

First, they are vertically integrated: young students may interact with older students, college students, graduate students, industrial mathematicians, professors, even world-class researchers, all in the same room. The circle is not so much a classroom as a gathering of young initiates with elder tribespeople, who pass down folklore.

Second, the "curriculum," such as it is, is dominated by problems, rather than specific mathematical topics. A problem, in contrast to an exercise is a mathematical question that one doesn't know how, at least initially, to approach. [...] [Problems] do not come with algorithms attached. By their very nature, they require investigation, which is both an art and a science, demanding technical skill along with psychological strategies, what I call the "three Cs" of concentration, confidence, and creativity. Math circles teach students these skills, not with formal instruction, but by doing math and observing others doing math. [...]

I have no real idea how to study, teach or teach studying math (I only know what has worked for me before). However, I feel that going in order through "alphabet, grammar, vocabulary, syntax and all the other things" is not a good idea.

If I was pressed to give some advice, I would recommend "A brief summary of effective study methods" by Arran Stirton and then quote Paul R. Halmos: Don't just read it; fight it! (the picture comes from the Abstruse Goose webcomic). 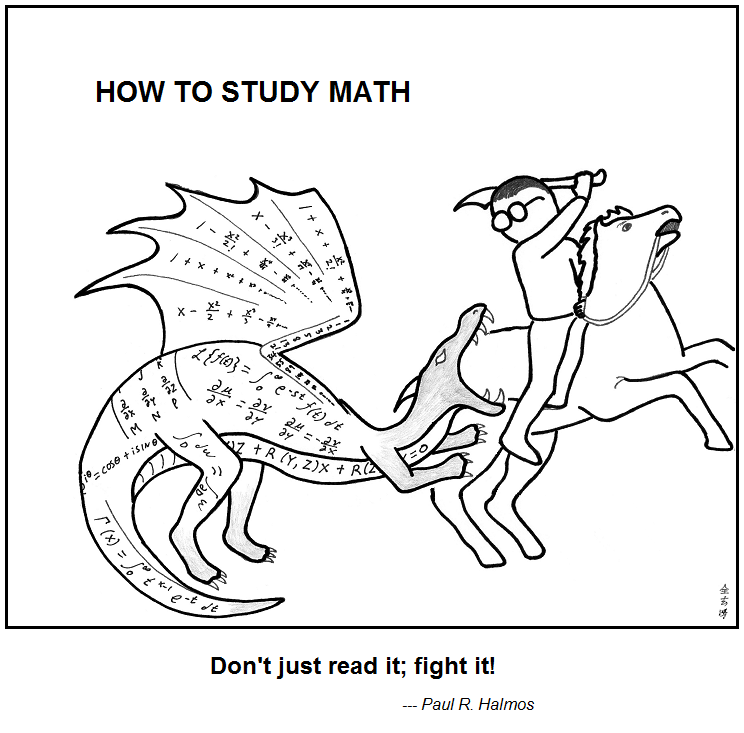 I hope this helps $\ddot\smile$

As an outsider (I am a user of mathematics in my field -economics- and not a mathematician), I most certainly agree that "Mathematics is a language" (I think J. Willard Gibbs is credited with the saying). And a very useful and powerful one. But then I have to point out that I disagree with the OP sentence

To learn a language, first we have to know its alphabet, grammar, vocabulary, synatx and all the other things

-especially with the use of the word first : Not always does a person gets to learn a language in this "linear" (or would that be "sequential"?), and safe, way.

But for students to actually see Mathematics as a language, I believe that they must first translate something in the language of Mathematics, from a language that they already know (the joy of speaking a language per se comes to be appreciated usually later - James Joyce's Ulysses has as a prerequisite a deep knowledge of the English language in order to fully enjoy its beauty).

So I would think along these lines, and give them situations from the real world to translate into mathematics (in an abstract and symbolic manner of course).

I'd only add that as a toddler you didn't get a helping of grammar, and a dictionary for vocabulary, and Strunk and White for style roundup. You learned step by step, going from simple words and phrases to ever more complex (and interesting!) utterances. Much of what you'll have to learn and do initially will be the equivalent of toddler talk, but it is the way to reading and writing novels later on.

Not the answer you're looking for? Browse other questions tagged secondary-education student-motivation or ask your own question.

27
How to encourage women to study mathematics?
9
How is education in Mathematics relevant to Law?
8
How to address struggling readers in the mathematics classroom?
14
Explaining subjects whose justification requires demanding technical content
17
Motivating the study of matrices
10
How to overcome mathematics-related anxiety?
5
Sources for mathematics outside the mathematics world
6
Motivating Mathematics Movies
3
Math Anxiety get in the way of my Graduate School, I want to continue PhD
29
How do I show students the Beauty of Mathematics?