How to teach polar integrals

The idea behind polar integrals, leading to the formula $\int_{\alpha}^{\beta}\frac12 f(\theta)^2\,d\theta$, is beautiful and nice. But then we expect freshmen to have no trouble figuring out the correct $\alpha$ and $\beta$ to use. In my experience, finding the right $\alpha$ and $\beta$ in some run-of-the-mill polar area exercises is harder for many students than everything else in Calculus II, combined!

I have never, after years of teaching, been able to effectively teach how to find $\alpha$ and $\beta$. I could do an okay job teaching it if you gave me a week to devote to it, but usually only one lecture or less can be spared for it.

So how do you teach polar integrals, especially how to find the correct bounds, to freshmen in a single lecture?

undergraduate-education calculus
Share
Improve this question
edited May 17 '14 at 14:39

When I have taught polar representations of regions I used to use a physical pointer (a meter stick when at the board, a pen or pencil when working on paper) to "sweep out" the region like the hand of a clock. For instance, in the case of $r = \cos(\theta)$, I would start by pointing from the origin along the positive x-axis. I would say: "When $\theta$ is zero, the radius is 1." As the pointer sweeps counter-clockwise I would say: "As $\theta$ increases, you can see the radius is dropping, until" (now the pointer is pointing directly upwards) "now we are at 90°, or $\pi/2$ radians, and the radius is zero." Continuing to sweep counter-clockwise: "Now $\theta$ is larger than 90° and the radius is negative. See how the points on the graph are on the ray pointing in the opposite direction from the pointer?" Continuing to sweep: "We are approaching $\theta$ = 180° or $\pi$ radians, and the radius is approaching $-1$."

End by summarizing: "The pointer had to sweep out just 180°, and the function traced out an entire circle. So we integrate $\theta$ from 0 to $\pi$."

A couple of comments on this approach: 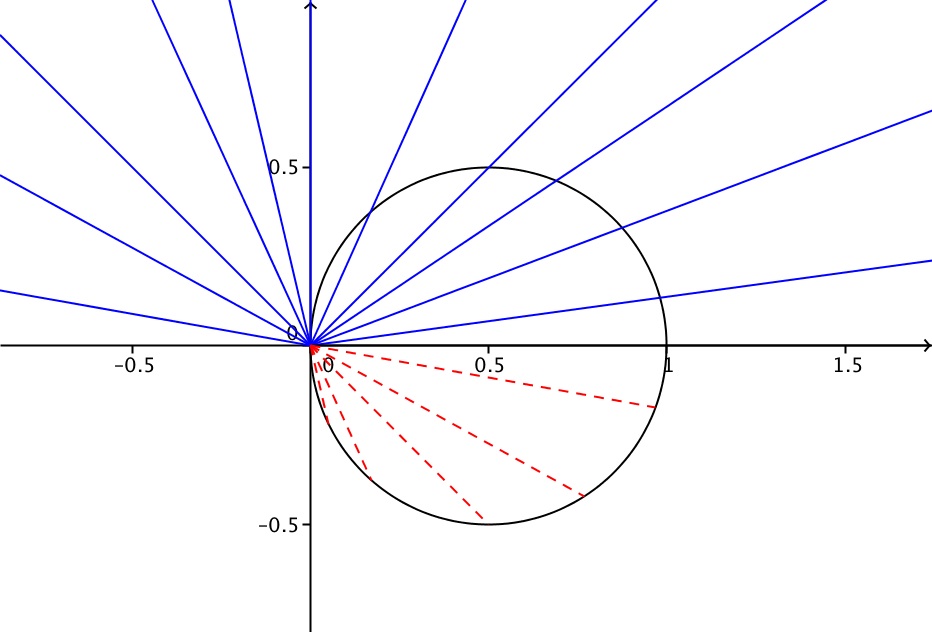 Here it is as an animated GIF; in this one, the blue rays represent the pointer direction and the red dotted segments represent the values of $r$ (whether positive or negative).

A lot depends on what your students have seen earlier. It is, indeed, nearly impossible to do a good job in a single 2hr lecture, if you need to cover both differentiation and integration in polar coordinates in one go. The good ole spiral approach (bad pun intended) could work better. I describe how I do it, but unfortunately I don't know if this is any better. Alas I cannot cite any comparative studies.

Remedy: draw pictures! Lots of them! Insist that the students do so, too. It's nearly impossible to do well here if you don't.

IMO the basic problem is that students are not used to thinking in terms of polar coordinates, and polar coordinate curves, at all. In school they at least got to plot several lines, parabolas, trig functions, rational functions and such (YMMV). Thus they know what to expect when plotting $y=f(x)$ for some standard $f$. Not so in the polar world.

After having banged my head against that wall for a year two I was in a position to partially redesign the 1st year calculus courses (read: write my own lecture notes). In these parts we do elementary functions, sequences, continuity and derivatives in the Fall, and the integration and series in the Spring. Except that my predecessor had done indefinite integrals at the end of the Fall semester. I moved that to the Spring and instead did differentiation on parametrized curves, including polar ones. I only set modest goals. While I did the obligatory example of tangents on a logarithmic spiral I largely only expected students to be able to plot in polar. A typical exam question is to determine which of given six polar curves come from which functions. They do well with four-leaved clovers and such, but even good students may err in noticing the difference between a left-handed and a right-handed spiral.

Anyway, come Spring term and integration at least the good and intermediate students usually do well. Weaker brothers and sisters still think in terms of $xy$-plots out of inertia. Because they never drew those pictures.

Which brings us back to the pictures. Even relatively good students fail to draw enough of them. So the test question:

Find the area of the region bounded by the polar curves $r=\cos\varphi$ and $r=\sin\varphi$.

does not go as well as I had hoped. Way too often they only tried to solve the equation $\cos\varphi=\sin\varphi$. If only they had plotted it first and started thinking second.

Edit: Did I say that I think you need to make them plot curves in polar coordinates? Many of them! And you should give them examples showing how it is done. Also those that aren't in the textbook/lecture notes.

Caveat: I'm not positive that the idea of introducing the students to polar coordinate curves at the end of a semester long course is best. Come December some of them are exhausted by the epsilons, and may not be receptive to learn about something they have never seen earlier.

46
Should we avoid indefinite integrals?
13
Which first, definite or indefinite integrals?
9
How to teach calculus (book recommendation)
9
Applications of MVT for Integrals, suitable for calculus 1
16
Evaluating integrals geometrically, without using the fundamental theorem of calculus
10
How to teach Leibniz and Newton's notation
4
Polar form before Cartesian form when introducing complex numbers
4
How to teach sketching a parametric curve?
2
How to teach integrals motivated by the work done in moving an object?
67
How shall we teach math online?