How much time to spend on a single question?

When I was self-studying as an undergraduate, I would spend up to two weeks working on a single problem or trying to understand a proof in Rudin's Principles of Mathematical Analysis. I realize now that I wasted a lot of time and could have learned a lot more if I had spent less time struggling and asked other people for help/looked up with answer.

Currently I only try to spend about 30 minutes to an hour on a single problem before asking for help. Is this reasonable?

How much time should one spend working on a single question? And by question, I mean ones that you would find in upper level undergraduate and beginning graduate level textbooks.

The key is not just that you spend time on a problem - it is normal to struggle with problems at the level you have described - but that you do so in a productive way. In fact, the notion of productive struggle is present in the literature on Mathematics Education; see, for example, my earlier MESE response here.

An interesting source to consult is the Schoenfeld article "What's All the Fuss About Metacognition?" available on google books here. Unfortunately, the images are not present in the link given; below is a particular diagram from the article, Stages. time spent on each stage, sequencing, and management activity in the Expert Group (of Problem Solvers), and the text corresponding to it: 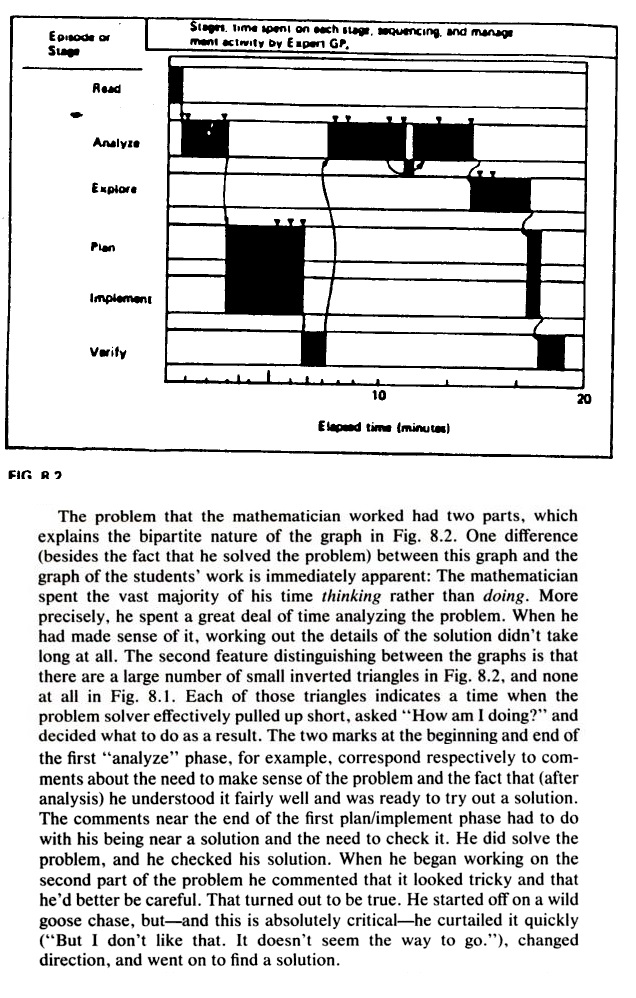 The point I wish to draw your attention to is the second feature discussed above. Namely, that expert problem solvers ask themselves questions about their own thinking while struggling with a problem. This metacognitive feature (metacognition, by the way, refers roughly to thinking about thinking) is often enough to distinguish expert and novice problem solvers.

If these ideas are interesting to you more generally, then I suggest looking up Schoenfeld's (1985) Mathematical Problem Solving. The area that you are asking about would be found under the discussion of control, though the sense that 30 minutes is enough time to spend on a single problem would be quite relevant to his discussion of beliefs and belief systems.

You can find a bit more discussion around these sources in an earlier MO response of mine here.

Summary: If you are looking for an actual number of minutes that you should spend on an individual problem, then I cannot answer this in any sort of generality. Instead, I suggest engaging with the problem as long as you can carry out an idea or recognize an idea is not working and then try to think up a new approach. (In the Mathematics Education literature, sometimes a problem is distinguished from an exercise by defining the former as: a question for which the method of solution is unknown at the outset.) Sometimes a single sitting is not the best way to do this; instead, you might walk away from the problem and come back later when you are ready to try some new method. There is a literature on this idea of taking a break from a problem that you are trying to solve (Wallas (1926) calls this the incubation period) and much more to say in this direction, but let me conclude my response here at the risk of going off too far on a tangent.

Not the answer you're looking for? Browse other questions tagged undergraduate-education homework general-pedagogy or ask your own question.

39
What does math education research know about difficulty vs. effectiveness?
35
How can I help a student who has a "wrong" kind of enthusiasm?
16
Convincing a student it's OK to move on to another problem
13
Moving From Rote Learning To Creative Thinking
12
Mathematics and the hermeneutic circle
15
Proving theorems on one's own: how long should one persist?
6
Explaining there's an infinite amount of irrationals to differential calculus freshmen
5
Learning vs. Development in Practice as a Math Educator
7
Polya's "Nearby Problem" Heuristic and Inquiry Based Learning

23
How should one tutor a student in undergraduate real analysis?
16
How do you revise?
5
Inquiry about My Self-Study Plan for Real Analysis (for my research and self-enrichment)
9
MacLane-Birkhoff's "Algebra" vs Jacobson's "Basic Algebra I,II" vs Lang's "Algebra"
1
Retain problems and combat regression in learning
5
I need strategies for tutoring a bright, motivated student currently taking college algebra who just doesn't seem to retain the things I teach
2
How can maths assistants at a college be extra helpful for professors?