concept-motivation trigonometry
Share
Improve this question
edited May 25 '14 at 23:44

Suppose, in a given coordinate system with the origin at a given point, an object is $r$ units away from the given point at an angle (compass heading) of θ degrees -- find its coordinates.

There are many other applications, too, but geometrically, the point is to solve the problem as a function of the angle (and distance). It turns out the dependence on the angle may be reduced to the unit circle, one of the few easy things about trigonometric functions.

Unfortunately I don't have any way to draw pictures on this computer, otherwise I could give a more helpful answer, but I have thought about this and I would start with a diagram a little like the following from wikipedia - but initially only with cos, sin and tan (and maybe cotangent): 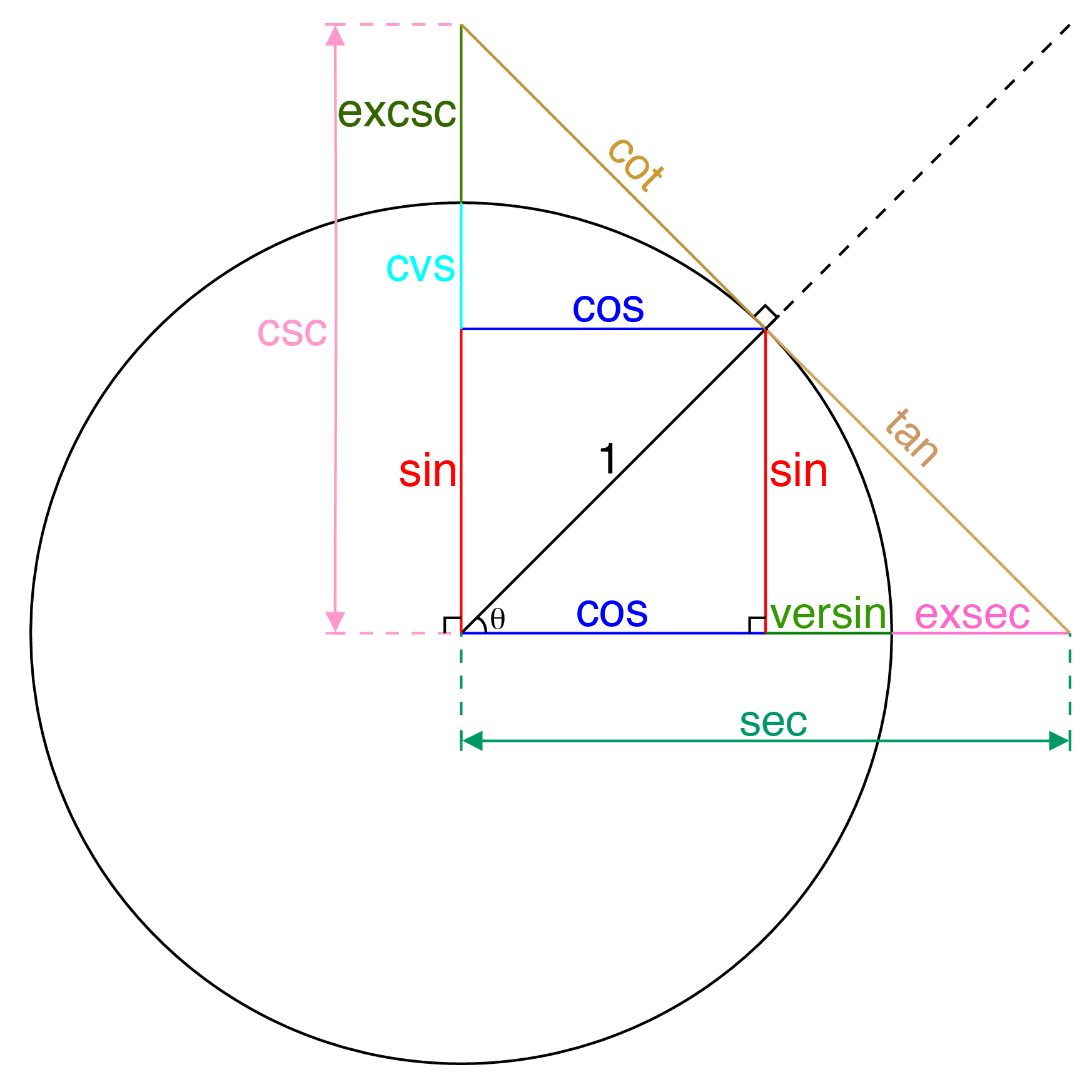 I would start by motivating sine. Depending on how concrete the students need things to be (and some need more than others) I would imagine the unit radius line as (say) a crane or robot arm. The sine of the angle is then the height of the arm above the horizontal. This is true for all angles even ones outside the 0 - 360 degree range.

When the arm goes below the horizontal, the sine is (obviously) negative because you are going below the line. It is easy to see that sine is positive from 0 to 180 and then negative from 180 to 360.

Cosine is then the distance projected onto the horizontal by the line (eg the length of shadow cast by the crane or how far the robot arm stretches at that angle). Again this is true for all angles. You can see it is periodic and will become negative as the angle passes 90.

Tangent is less obvious but it should be clear that it grows without bound as the angle approaches 90 (and you can draw some pretty long tangents to show this). The range -90 to 90 is fairly clear. Obviously you can extend the definition, but the intuition requires a little more work.

Sec and cosec are likely to be for more advanced students but you can see how they have their own definition as well as being multiplicative inverses of cosine and sine. Sin^2 + cos^2 = 1 is hopefully obvious if you know your pythagoras (and this is a way of re-using that formula and reinforcing it), other identities can be drawn out geometrically.

Now, I suspect that this works much better for some students than others. Some people really don't have or like to use a pictorial way of thinking about something, but I think this is useful.

To use Law of Sines and Law of Cosines for triangles that have no right angle, we need the trig functions to be defined for angles greater than 90 degrees.

To model phenomena that are periodic, we need trig functions that are defined for all real numbers.

Definitions based on circles (unit or not) achieve these goals.

You might also like the video I show as a lead-in for our work on y=sin x, showing a human-powered ferris wheel.

"Similar triangles all have the same trigonometric values, since they are all defined as ratios of side lengths. We want to think about how sine and cosine vary with the angle. In principle, to think about how $\sin(30^{\circ})$ compares to $\sin(31^\circ)$, for instance, I have to think up a right triangle with angle $30^\circ$, and another with angle $31^\circ$. If I make one of these triangles very large, and the other very small, it will be difficult to compare the ratio opposite/hypotenuse for each triangle. A nice solution is to fix the hypotenuse. In fact, you can fix it to be of length $1$, so that the length of the opposite to the angle is the sine. Then thinking about how to compare these values becomes simpler, since I have "standardized" how I will compare them."

Now draw several triangles which all have the same hypotenuse, with the angle based at the origin, and the angles all sharing the positive horizontal axis in common.

"What sort of figure am I drawing with all of these points?" [A circle]

"Right, so the abscissa of this point corresponds to the cosine of this angle, and the ordinate to the sine. Using our definition of sine and cosine in terms of right triangles, it does not make sense to speak about the sine of an angle larger than $90^\circ$. But this new picture shows us how to extend the definitions of these functions in a natural way."

A force $F$ is applied to a railroad car, at an angle $\theta$ above the horizontal. Find the component of the force parallel to the tracks, which is the only component that can accelerate the car.

Not the answer you're looking for? Browse other questions tagged concept-motivation trigonometry or ask your own question.

8
Unit circle vs. ratios of right triangles vs. wave functions for introducing trig functions
8
How to convince the students of grade 8 that $\sin 90^\circ =1$? ( calculator not allowed )
5
What purpose do these kinds of question serve in mathematical training?
4
How are the basic trigonometric functions introduced to students?
7
Rules to eliminate erroneous solutions in Trig equations?
8
May we permit identities to be established by equivalent equations?
8
"Amplitude" of Tan and Cot functions
11
Pedagogical considerations behind current order of presentation of trigonometry
5
How to intuitively understand how the trig ratios are calculated