Where can I buy a compass that can hold an "Expo" dry erase whiteboard marker?

Question in title. I'd like to draw a perfect circle on the whiteboard using "expo" dry erase markers. Is there a store I could buy such a compass at? Thank you

I bought the product pictured below from Amazon, around four years ago, for about $10. That exact product is no longer available, but if you're willing to search Amazon for "whiteboard compass", then you'll see a number of similar products. 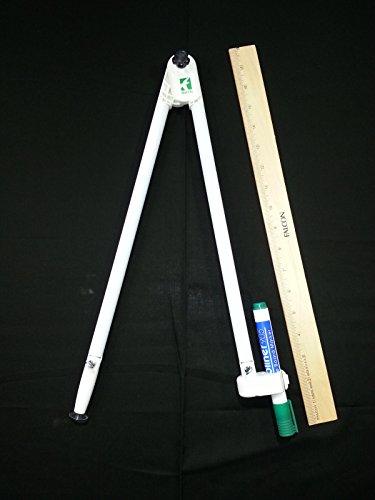 It's worked satisfactorily for me, although I don't put it through heavy use (frankly, just one day a year in a college algebra class).

I'd previously tried the "jury rigged on a string" method and that did not work well enough for me. First, there was nothing holding the angle of the marker fixed, so it would wiggle around the circle and not match up properly at the end. Secondly, the little bit of winding in the string at the center would also throw off the consistent radius. Third, the pen would tend to slip out of the string.

The compass I got is large (bordering on unwieldy), but I like the fact that it illustrates/resembles a "traditional" compass, so students have a visual sense of what we mean by that term normally. Granted the limited number of times I use it, I'm very happy with that little bit of tradeoff.

This looks like it should work with any (regularly-sized) dry erase marker, since just the drawing tip fits through the holes:

[Note: I don't want to link directly to the ebay post since those change over time, and I'm not suggesting this seller. It is currently the first item that Google returns when I search "suction cup draw circle whiteboard".]

Alternatively, what about just getting a regular suction cup that will stick to the whiteboard, tying one end of a string to the metal hook (if it has one), and tying the other end of the string around your dry erase marker?

8
Adoption / penetration rates for dynamic geometry software in secondary school
19
A parabolic arc is not semicircular. But students think so
16
A text-based program to draw geometric figures
11
Phrasing the Van Hiele levels in student-friendly language
18
Evidence for or against the claim that some students are "algebra people" and others are "geometry people"
28
How to give my students a straightedge instead of a ruler
1
Workbooks for advanced high school math topics
5
Is there online geometric construction software that models physical constructions?
4
Can we define length and perpendicularity not via an inner product?
27
Should figures be presented to scale?