How do I sketch a good gaussian curve freehanded, or by using only common sketching tools?

I'm a lousy artist. If I want my Gaussian curves to be accurately drawn when I use a whiteboard, or work with pen & paper, what are my options?

Is there a way to use a straight edge, or compass, or some other trick to getting accurate curves from the Gaussian family?

I want to make more symmetrical sketches where the error of any given area under the curve is minimized. 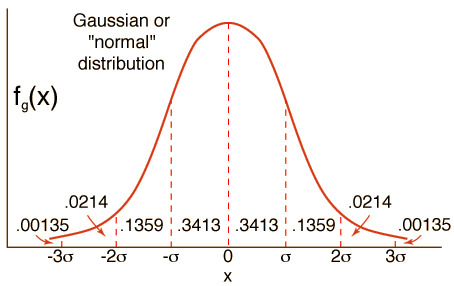 Actually, I think I did practice a lot back then. Because my graphs were sometimes very much not symmetrical. Also, students' graphs are worse, so I gave them a sheet of empty normal curves (6 per side) for them to use. And told them they could have as many copies as they wanted.

One trick for free-handing a more symmetrical bell curve is to draw it in two strokes, each starting from the center point (once right-to-left and once left-to-right).

Perhaps you could make a stencil out of cardboard, which you could trace onto the board.

However, I wonder about the pedagogical value of perfectly accurate drawings. There is an important difference between a "sketch" and a "plot", and they each have their place. I would think that your students are probably not going to be able to reproduce any figures that rely on subtle scaling factors in their notes.

Consider using a tool such as a 'flexible curve' to draw your curves on a whiteboard or paper. It's like a stiff mouldable ruler - you bend it into your required shape and then draw along it.

Not the answer you're looking for? Browse other questions tagged calculus geometry statistics or ask your own question.

4
How can I explain $\lim_{x \to \infty} \frac{e^x+e^{-x}}{e^x-e^{-x}}$ using L'Hôpital's Rule?
3
When teaching someone how to prove a function is uniformly continuous, using epsilon/delta, which example would be among the simplest?
4
How to teach sketching a parametric curve?