Good exercises that force you to apply the definition of the derivative, without explicitly telling you to do so?

I'd like to ask my students whether some real function is differentiable at a certain $x_0$. I prefer not telling them that they have to use the definition of the derivative, but to instead present a question that by its nature would require the usage of the definition. Usually I achieve this goal by giving them some piecewise defined function $f(x)$ which would force them to use the definition.

The problem is the following theorem which can easily be proved using the mean value theorem: if $f(x)$ is continuous in a neighbourhood of $x_0$, and differentiable in that neighbourhood except possibly at $x_0$ itself, then in case $\lim_{x\to x_0} f'(x)$ exists then $f(x)$ is differentiable at that point with derivative equal to that limit, and the result is also similarly correct for one sided limits and one sided derivatives.

This means that students often use this theorem either because they have seen a TA use it, or worse, because they don't see why it would require proof in the first place. In either case, this does not check their understanding of the definition (and I am left with the dilemma of how to grade these correct solutions which implicitly use a theorem which was not proven in class).

My question is: are there exercises which you must solve using the definition of the derivative and which do not easily allow a cop out such as the one above?

My thoughts are that there are 3 options-

I'd appreciate any ideas for such a function which forces you to differentiate "by hand", or any thoughts whatsoever on how to tackle this problem.

Here are some example questions. 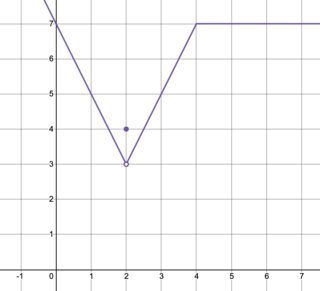 The graph of the function $f$ is given above. Evaluate the following limits. If the limit is infinite, write $\infty$ or $-\infty$ as appropriate. If the limit does not exist write "DNE".

To successfully answer such questions, the student must have a pretty strong grasp of one sided limits, and the interpretation of difference quotients as slopes.

I'll argue that this will be likely not feasible for a test question.

There's several points in the calculus progression where there's a "hard bottleneck" of some sort, but once you get past that, you can leverage the new fact to easily solve previously-hard problems. One example: finding the derivative of a monomial (from the definition + binomial theorem), plus the sum rule, and then all polynomials become trivial. Second example: finding the derivative of the first trigonometric function, and then all trig functions become trivial.

Yes, ideally we want our students to understand those key proofs. No, after you've done it once, it's not really possible to put it back in the bottle and forget the new foundational fact.

So while somewhat awkward, I'll propose that to confirm understanding of those critical proofs, you just have to give an exercise that says, "prove this from the definition". Anything else will likely be far too complicated or unnatural in an exam situation (per tag in OP).

Give a function together with some properties of the function, but do not give a formula, and ask for the derivative.

Let $f: \mathbb{R} \to \mathbb{R}$ be a function which enjoys the following two properties:

These kinds of problems used to appear on the AP Calculus BC "essay portion" in the 60s and early 70s. I know because my AP calc teacher had us do every single AP problem going back to the inception of the AP test.

This might not be what you want, but sometimes a backwards problem appears more difficult than it seems and the difficulty is immediately removed when you know and apply the definition of the derivative.

A nice class of examples that can be used for this purpose are functions that are differentiable but not continuously differentiable (since the "$\lim_{x \to x_0} f'(x)$ trick" doesn't work for them). A typical example is the following exercise:

Not the answer you're looking for? Browse other questions tagged calculus exams definitions problem-design derivative or ask your own question.

18
How can I motivate the formal definition of continuity?
4
Why is continuity defined as a local property?
4
Why is continuity only defined on its domain?
4
When analytic form of derivatives is preferred over numerical form?
4
Recommended list of things calculus students should be required to memorise?
4
Introducing derivative concept and definition
8
Exponential & logarithm in a high school calculus class
1
Introducing direct substitution in an intro calculus course