Explaining why volume of cone is a third of cylinder

I came across this video explaining to kids why the volume of a cone is a third of the cylinder of same cross-sectional radius and height. Essentially the explainer presents pre-created cylindrical and conical objects with equal dimensions, and says it takes three cones to carry the same amount of water as the cylinder.

Typically this video is intended for pre-calculus students, aged around 13-14. I understand that calculus is necessary to rigorously prove the statement. I also understand that sometimes there are different varieties of "proofs" - geometric proofs or proofs by construction. Does this explanation fall into an acceptable category of proof? Or is it simply nothing more than a mnemonic to remember the volume formulas?

secondary-education geometry proofs
Share
Improve this question
asked May 2 at 10:11

This is an experiment which can lead you to guess that the volume of a cone is approximately $\frac{1}{3}$ the volume of a cylinder with the same base and height. It is not a proof in any sense of the word.

If mathematics were a science then we might have a "theory of the volume of cones" which would be confirmed by repeated experimentation with more and more exacting experimental set ups. However, mathematics is not a science: it is a deductive art. This is, I think, a valuable conversation to have with students.

It is possible to justify this fact without Calculus if you accept Cavalieri's principle.

First make a special pyramid. Use an $a$ by $a$ square pyramid with height $a$, where the apex is located directly over one corner of the base.

Now take any arbitrary cone with base of area $B$ and height $h$. Compare this to the pyramid whose base is a $\sqrt{B}$ by $\sqrt{B}$ square and whose height is $h$. Using similarity, you can show that these have equal area cross sections. So by Cavalieri's principle, they have equal volume. Thus the volume of the cone is $\frac{1}{3}Bh$.

One framework of understanding and building towards proof that we teach to mathematics teachers at primary school level is (and translated to English on fly):

There is some overlap between these, and some of these are also proof strategies when formalized.

I think one to three are directly from

His fourth category might be a bit different than the ones I use here.

Looking at the video, the presenter demonstrates the claim with a single example and invites (claims) it to hold for others, too. So we are at least at the level of naive empiricism.

We might argue that there is nothing special about these particular cylinders (they seem to be of different ratios of height to radius) and it is also unlikely that something whether this ratio is a rational number or not, or some other occult property, would have any effect. So maybe this is a generic example? But the video does not argue this; I am over-interpreting here. But not much.

We did not see this done with a cylinder that has very extreme form, like ratio of height to radius being very small or very large. Neither did we see the exercise done with a great deal of accuracy. Had we seen such, maybe we could say that this amounts to a generic example: the claim would have been demonstrated with a usual, an extremely sharp and extremely dull object, and thus it would have seen likely that it also holds for other shapes. Alas.

Se we certainly saw a sloppy example, and were implied to that this same should hold generally, so we are at least at naive empiricism and maybe, maybe, seeing a generic example.

Without Calculus, you can still be sort of rigorous. With Euclidean geometry we can find the centroid of a right triangle by finding the point where all the medians intersect. A cardboard triangle will balance on a pin at its centroid. We also know that the centroid cuts each median into 1/3 and 2/3's of its length. (This is where the 1/3 comes in.)

Second, we have the (second) Theorem of Pappus (which takes some sort of calculus to prove, but which would seem quite reasonable to elementary students) which says that he volume V of a solid of revolution generated by rotating a plane figure F about an external axis is equal to the product of the area A of F and the distance d traveled by the geometric centroid of F.

A cone is formed by rotating a right angle about one leg. We can calculate its volume using these two theorems.

A possibility may be to show how a cube consists of 6 equivalent pyramids. The picture below shows three of them, and has empty slots in between for the missing three (I felt this would make the picture easier to comprehend). Each of the pyramids has height equal to the edge of the cube, and base that is one half of one of the faces of the cube. The only way the volumes can add up is if we have the correct formula $V=\frac13Ah=\frac13\cdot\frac12a^2\cdot a=\frac16a^3$. 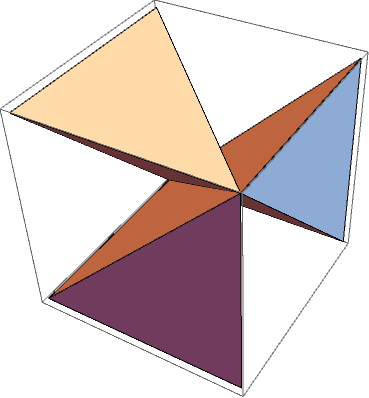 Not the answer you're looking for? Browse other questions tagged secondary-education geometry proofs or ask your own question.

7
Explaining Closure to "Basic" Algebra 2 Students
8
Gifs of finding the volume of 3d shapes?
13
Explaining the phrase "in terms of"
24
Why do we care about multiple proofs of the same theorem?
11
Ideas for explaining 4D and higher dimensions
6
Difficulty in explaining sample space
6
Should proofs include a third “context” column?