Applications for logarithms in a business math course

Context: I am an assistant professor at a small liberal arts institution in the US.

The title really says it all: I am looking to provide applications for logarithms in a business math course (most students are freshman). The sciences have a ton of uses for logs, but I'd like to have something specific to business/accounting/finance/economics.

Of course you can use them to solve questions related to exponential growth/decay problems, but I'd like to find examples where a logarithmic function itself describes the behavior we're examining. I've looked in a few business math textbooks and haven't come up anything terribly compelling thus far.

Examples I've written myself basically all hinge on some sort of "diminishing return," like the price of a tech stock immediately after its IPO, the effects of continued spending on advertising, or the depreciation of electronic equipment.

I'm a mathematician (not a businessperson), so I am suspicious there might be some ideas I'm missing, especially in economics. Any suggestions or advice is highly appreciated! 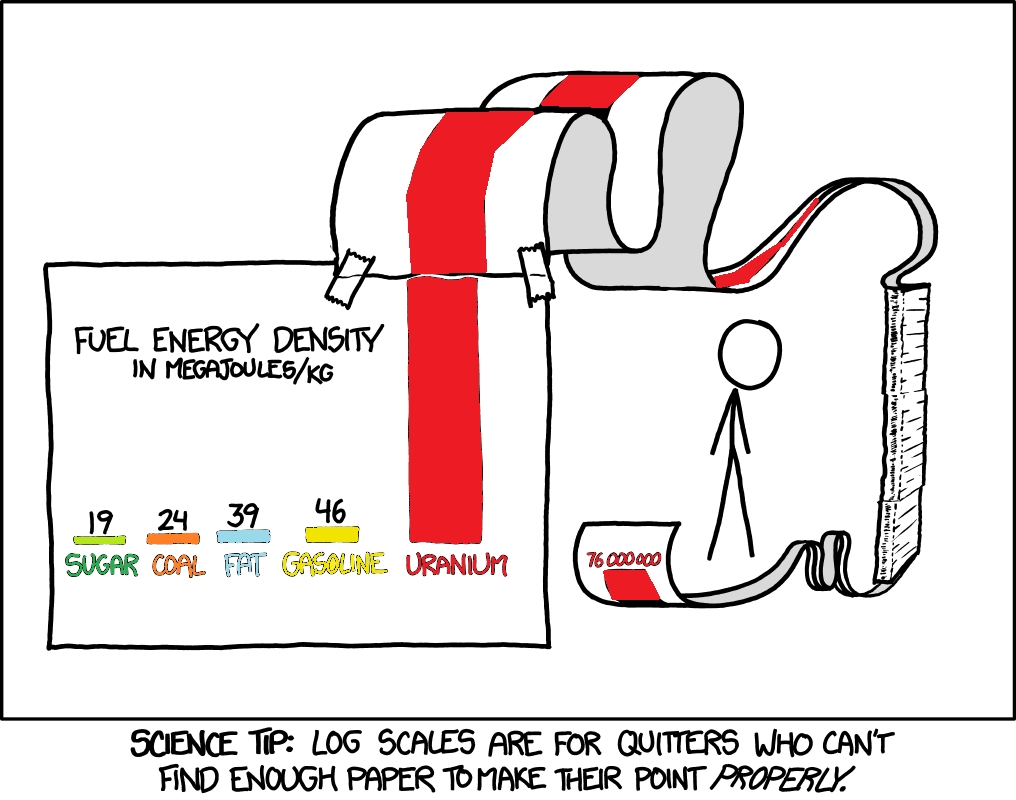 Thanks to user Nat for charting the log-10 version in the comments! But I matched Nat's colors to mine.

This is my favorite motivation. (I improved the original text from reddit.)

Imagine you wanted to plot the net worth of people in your area, in a graph that shows all the data. Presuppose that most net worth will be around the lower end, with some higher in between. And presuppose that the wealthiest person possesses $500K. You should be able to effortlessly see the distribution of net worth among your population.

Then suddenly Elon Musk decides to join your area. Now your graph is no longer readable, and it's warped! Why is it misshapen? Because the number line suddenly jumped to 147 billion!

As your graph is supposed to show all points, now it's squished such that Elon Musk is at the top, a single outlier in the whole distribution. Even the richest resident in your area is a measly 0.00034% on the scale — This is how laughable 500k is in that distribution!

So now you take a logarithmic scale, meaning you take their net worth, throw it into a logarithmic function and then plot that value. You obviously have to adjust the y axis accordingly.

These now fit on a single graph, and you can still make out differences between the "smaller" numbers.

Logarithmic scales are generally often used when exponential growth is concerned, like population growth, spreading of diseases. Also when you have to work with data that spans a huge range of values, like comparing the size of objects in the universe.

Another ELI5 introduction to log scales. I edited it.

Suppose you measure something that produces only positive numbers (this is a requirement to use a logarithmic scale). You get these measurements:

Ouch! That's quite a lot of variation there! If you plot this on a normal scale, the plot is going to look misshapen! One point is way off somewhere, and the rest sort of clustered around zero. By looking at this plot, nobody is able to tell that there's a huge difference between 1 and 0.0000000053453.

This is not a contrived example. I made up these numbers, but lots of natural phenomena are like this.

So what do we do? We can use a logarithmic scale. If I take the logarithm of the four numbers above, I get:

If you plot these numbers on a normal scale, things are much clearer! There's a negative number, 0, another near zero, and a positive number...all in the interval of $[-15, 15]$ that you can plot by hand!

Logarithmic scales are used for all sorts of phenomena that tend to produce numbers such as the ones above, such as earthquake intensity (Richter's scale), concentration of ions (pH-scale), anything that involves our senses (f-stops in photography, decibels, octaves), entropy, star brightness... the list goes on. Another less obvious example is the "five standard deviations" rule of thumb used by CERN, when CERN were looking for the Higgs boson.

I feel compelled to provide your "of course" answer of exponential growth/decay. This answer is hopefully appropriate for lower-level business courses such as high-school level.

Here's a totally reasonable, practical, and compelling question where logarithms are used to get the answer.

How many times does something need to change by a percentage?

I was training to run a half-marathon (22 km). The advice given to me was:

Do not increase your running distance by more than 10% each week.

So, if I was currently running 5 km, I would need to know how many times I needed to increase my distance by 10% in order to reach my 22 km goal. I was trying to set my expectations as to how many weeks it would take me.

Each week my distance should be 1.10 times what it was the previous week.

If you're unfamiliar with exponents and logarithms, it can be intimidating to see your variable trapped in the exponent like that and you need a more advanced mathematical technique that can get it out. Now with logarithms you can do $$log(1.1^n) = log(22/5)$$

The advice is for me not to try to do this in fewer than about 16 weeks of training.

If you take this same problem and just change the story to suppose that I invest \$5,000 and I can increase my money by 10% per year, and ask "How many years will it take until I have \$22,000?" then it's a business application related to planning and computing the answer in variations of the scenario builds intuition about exponential growth/decay. (The answer is the same: 16 years.)

Compound interest and cumulative compounding are the classic financial examples.

A search on "investment math" will give you several books, problems, sites. I would suggest to buy one or check out a few in a college library. Below is a link to a pdf of one by Hart:

If you want a shorter, simpler take, than see the single chapter on investment math that Hart included in his college algebra text (war manual EM 315). You can get it from a library (use ILL if needed) or just buy it for a few bucks on a used book website.

Find some processes that are naturally exponential (investments, chemical processes, PSA test values in Prostate cancer patients). Get some log graph paper. Get them to graph this data on both normal graph paper and on log graph paper.

If you can find a lot of examples from radically different knowledge areas, it will be more effective.

Get a slide rule (yes, you can still find them online (there used to be an online shop in Vancouver Canada, but it looks like it's run out - you can find them on Etsy and eBay)). There are slide rule apps for phones.

Show the class how people multiplied and divided large numbers before the advent of calculators.

As an aside:
I have had prostate cancer. After my prostate was removed, my PSA count should have dropped to zero, but it's not unusual to see it greater than zero for several months. Typical PSA counts for folks my age are 2-3 ng/ml. With no prostate, I get "ultra-sensitive" PSA tests, that measure a few orders of magnitude lower than that. It takes a while before testing starts again after a prostatectomy. Mine were definitely non-zero. After 4 tests, the doctors kept saying "don't worry, it's so low". But, those 4 tests, when graphed (taking into account some measurement noise) formed a near perfect exponential curve, with a doubling time of about 4-5 months. Don't worry, radiation got rid of the troubling cancer cells

A fundamental concept in economics is elasticity, which is closely related to logarithms:

A Cobb-Douglas production/utility function has the form $$ U(x,y,z,\dots)=K\,x^ay^bz^c\cdots \tag{1}$$ where $U$ represents the utility or level of production for given levels $x,y,z,\dots$ of "inputs" like capital, labor, materials, energy, and so forth. A typical modeling application is to maximize $U$ subject to constraints on the inputs. The typical constraint is to measure the inputs in terms of dollars and require the total to be within budget. For such a problem one can set $K=1$, if you're a mathematician; others might insist on proper units, so that they can relate solutions to what they know about their factories and sales.

What is the significance of the exponents $a,b,c,\dots$?

We have (ignore $K$ if you wish): $$\log U = a \log x + b \log y + c \log z + \log K \tag{2}$$ The differential of $\log w$ is the relative change $dw/w$, which the students should think of in the common phrase, "percent growth." They should think of "percent growth" as the derivative of the logarithm of the quantity. In our case, we obtain $$ {dU \over U} = a\,{dx \over x} + b\,{dy \over y} + c\,{dz \over z} \tag{3}$$ We see that the exponents appear as the coefficients in a linear combination of the percent changes in the inputs. They indicate the relative weights of the percent changes in the inputs. Together, this linear combination models the percent change in utility. At maximum utility, $dU=0$ and the linear combination has to "balance." An increase in $x$ ($dx>0$) is met by an overall decrease in the remaining terms. In terms of a budget constraint, if you spend more on $x$, you have less to spend on $y$ and $z$. It turns out that at maximum utility, one spends on $x,y,z$ amounts proportional to $a:b:c$.

The role of logarithms here, algebraically, is rather minor. As a person who attended a small liberal arts institution in the US, what I liked about my math program was an emphasis on concept, in particular, on applying concepts in thinking about problems. There are a couple that stand out to me. One I have already emphasized, the connection between logarithms and relative change. The other is how logarithms convert an exponent form like (1) into linear forms (2) and (3), and linear is much easier to understand. Of course one can proceed (3) $\rightarrow$ (2) $\rightarrow$ (1) via the exponential function since it is the inverse of the logarithm, another important concept. These concepts are mathematical, not business concepts. One builds on business concepts to create a mathematical model. Then one applies whatever mathematics is appropriate.

Growth rates, especially of macroeconomic variables, that are usually small in value, are routinely modeled theoretically and estimated empirically by using logarithms. Let $Y_t$ be, say, gross domestic product, or national income, or aggregate consumption, at period $t$, (which is usually a year or a quarter), then its growth rate compared to period $t-1$ is

This approximation is acceptable when $|\Delta Y_t/Y_{t-1}| < 0.1$, which is almost always the case with macroeconomic variables in quarterly frequency, or even in yearly frequency. By the properties of the logarithms then,

For micro-level, business level though, this may not be advisable to use, since single business may experience growth (or contraction) rates higher than $10\%$ in their revenues, profits or expenses --but then the log-approximation becomes rather visibly inaccurate.

14
Resources suitable for a beginners' course with exponentials
7
Sliderule for teaching logarithms
10
Greatest common divisor applications
10
High School Math Course focused on Sports
19
Does anyone teach logarithms via slide rules?
15
Are there direct practical applications of differentiating natural logarithms?
2
Logarithms chronologically before algebra
13
Are there any applications of $x^x$?
0
Which grade students should be able to solve applied economy / business / profit prediction exercises?
18
How should I teach logarithms to high school students?