Is this motivation for the concept of a limit a good one?

tldr: There is a simple intuitive definition of a limit for monotone sequences, and I suggest that it can be used to motivate the (more complicated) standard definition. I am asking for feedback on my suggestion. Do you think it can form a good motivation to present the students?

Edit: My target audience are students who are taking a rigorous calculus course, where full proofs and rigorous arguments are the center of the course. In particular, more than a third of the course is devoted to sequences and their limits. (Subsequence, Cauchy sequences, Bolzano–Weierstrass theorem etc). The course begins with sequences, and only after about 6 weeks we move to treat functions.

I suggest an approach for motivating the definition of a limit of a sequence.

While thinking of the definition of a limit of a sequence lately, I had the following thought: Naively, there is something which might appear unsatisfactory with the order of the quantifiers:

Intuitively, we would like to say that "as $n$ increases, $a_n$ tends closer and closer to the limit $L$".

which suggests first choosing $n$, and then choosing $\epsilon$.

Of course, this specific formulation $(1)$ is bad, since it assumes monotonicity, and it also does not imply that $|a_n-L|$ tends to $0$, it can tend to $17$ instead. (it implies that $a_n$ tends closer and closer to $L$, but not necessarily arbitrarily close to it).

The point is that the standard definition can seem "intuitively backwards".

Question: Do you think that the following idea provides a good justification/motivation for the way we define the limit concept? (perhaps in honors courses).

Now, one can prove that a sequence $a_n$ converges to $L$ (by the standard definition) if and only if there exist monotonically increasing $b_n$ and monotonically decreasing $c_n$ such that $b_n \le a_n \le c_n$, and $b_n,c_n \to L$.

(One can prove this claim directly, over any ordered field actually, without assuming and using the existence of infimums or supremums, but never mind that for now).

To summarize, I suggest:

The point is that after we have done this, we keep only the standard definition, which this reasoning "confirmed", since it's much more concise and easy to work with, then constructing bounding monotone sequences every time we want to prove a limit etc...

My definition of convergence for monotone sequences:

We say a monotone sequence $a_n$ converges to $L$ if

Item $2$ enforces the arbitrarily closed (without it there is no uniqueness).

I don't like it. Had a hard time following it. Just tuned out. Yes, I'm not a Ph.D. in math. But neither will be the target students. You should have won me over. You didn't. I have the IQ to follow this stuff. But you didn't pull me along. This is not being flippant. You will have the same issues with students if you approach them as you approached this forum.

I think you are better off being truly motivational (intuitive, loose, colloquial, pictorial) when you want to be "motivational". And as an adjunct and on top of the rigorous approach. Not to supplant it. A supplement. You seem to want to present a slightly different (non conventional) approach to the rigourous explication and see this as "motivation". It's not.

Also, it feels very "product forward" or even "pet idea from R&D forward", rather than market back. I urge taking the opposite approach and looking at the market more. Where do actual students struggle, with what tendencies and at least a semiquantitative ("many" versus "few" students) observation. Not hypothetical students. Real ones in the wild.

Also, consider multiple ways of correcting the issues. Not just an alternate rigorous explication or even an intuitive one, but things like drill and explication and interaction and personality of the teacher. Remember teaching involves humans.

From an intuitive (conceptual, motivational) sense the idea of "getting closer and closer to" is a good starter concept of a limit. OF course this does not need to be monotonic. So after discussion of say a decaying exponential, you can draw some sort of collapsing sinusoid and show that some dithering (actually use this word, remember we are in "motivation" land) is good enough.

Heck, just draw the graph and get them to consider the view. 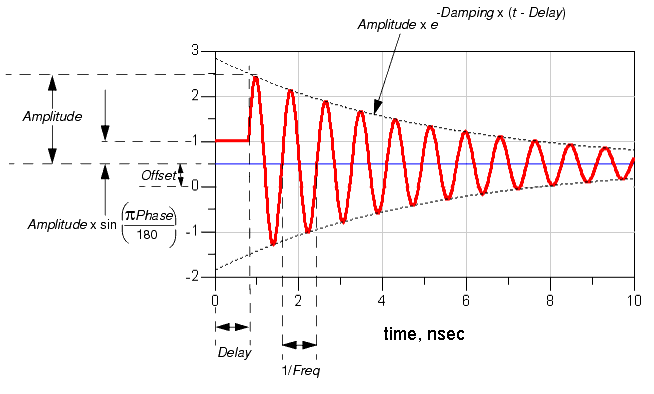 AND! Note you don't need to pre-emptively clarify this when first discussing limits. You can do this in a progressive manner. One view "closer and closer to" and then the corrective upgrade.

I think that the actual practice of rigorous proof in research papers (and competitive discussion with speakers in academia) makes neophyte academic teachers think that they need to avoid any progression of ideas. For fear of looking or being wrong This is not correct, is not how people (real human people with limited meat brains adapted for fighting and fucking, not rule based silicon assemblies) progress in training. Think about your limit...it does not have to approach a goal monotonically. Neither does your teaching!

I think the answer depends on the meta question: why are students learning the definition of a limit?

Here are some reasons I can think of:

Each of these goals might suggest a different way to teach limits. If you can state what your goal is, I think it would be easier to answer whether your proposal is "good".

While monotone behavior is important in analysis (such as the monotone convergence theorem in measure theory), I think you should forget the emphasis on monotone behavior and just be honest with the students that the way we pronounce notation like $\lim_{n\to \infty} a_n = L$ or $\lim_{x\to a} f(x) = L$, namely “the limit as $n$ tends to $\infty$ of $a_n$ is $L$” and “the limit as $x$ tends to $a$ of $f(x)$ is $L$”, is backwards from the idea behind those concepts when they are made rigorous. It would have been better if we pronounced the notation as “the limit of $a_n$ is $L$ as $n$ tends to $\infty$“ and “the limit of $f(x)$ is $L$ as $x$ tends to $a$.” Offer a reason the precise definition leads us to quantify on the limit value (for all $\varepsilon > 0 \ldots$) first: it is in relation to how close we want to be able to get to the limit that we determine we are far enough along in the sequence variable $n$ or function variable $x$.

That is also why it gets even more subtle to prove convergence of a sequence or function when there is no proposed explicit limit value $L$, since the definition of a limit is not immediately applicable. That includes proving convergence of infinite series, where verifying convergence often precedes the estimation of the value of the series. I recall being confused when first learning convergence tests for series in the calculus, because here we were showing something converges without knowing ahead of time what it converges to.

The order of quantifiers is super important and subtle. Historically, it tripped up even prominent mathematicians. The difference between pointwise convergence and uniform convergence is the exchange of two quantifiers, and it is related to how mathematicians in the 19th century mistakenly thought they had proved an infinite series (convergent at each point) of continuous function is continuous.

Here is a simpler definition of limits which works better for monotone sequences, and has value in motivating further investigation of the concept of limits:

That is, the limit is a number $x$ such that $x$ is an upper bound (i.e. $x \ge x_i$ for all $i$) and $x \le x'$ for all upper bounds $x'$. This can be shown to be equivalent to the standard definition (using epsilons) for increasing bounded-above sequences.

I think this definition is a better one to present than something more ad-hoc, because the concept of a "least upper bound" (or "supremum") is an important one in Analysis. For example, my undergraduate Analysis lecturer used the existence of least upper bounds of non-empty bounded-above sets as an axiomatic definition of the set of real numbers.

Note that the concept of a "least upper bound" isn't a logically simpler definition — $x$ is a least upper bound if $\forall x' . (\forall i . x_i \le x') \implies x \le x'$, still with two quantifiers. But it's perhaps a simpler one to explain to students who aren't ready for formal statements with quantifiers, because it hides the quantifiers in the relatively-easy-to-grasp words "upper bound" and "least".

Two points to think about:

28
What are argument one can give to students on the definition $0^0$?
32
How can I teach my students the difference between a sequence and a series?
20
Evaluating the reception of (epsilon, delta) definitions
18
Teaching limits of sequences before limits of functions in Calculus?
17
What are your favorite instructional counterexamples on sequences?
8
What is the intuition behind the limit superior?
7
Motivating example for sequences, sums and limits in high school
6
What are some rationales to teach Computer Science students Sequences and Series?