What is a good teaching example of machine learning?

I'll be giving a guest lecture in a grade 12 calculus class. I'm going to give them an introduction to machine learning, and go through some of the math involved in training an adaline. It would be helpful to have some simple examples of problems that could be solved with such a technique.

Give an example, either practical or fun, of a binary decision that depends on one or two real valued variables.

For example, an email filter might mark as spam a message which contains the words nigerian and prince.

I'm not sure that neural network is the best example of machine learning, or that spam filters are good example of neural network usage. In particular, a decision that depends on "one or two real valued variables" seem neither practical nor fun. You can easily create a more sophisticated network, but there are still some issues.

Discrete things like "contains words $X$" cause problems because you would need to have a separate input for each (common) word indicating if it is in the message. If you insist, you can find some info about spam filter networks in this question.

Also neural networks are good only in some range of applications, and so it happens that humans are also quite good in number of them (guess why...), so that neural network machine learning doesn't seem that impressive (e.g. random forests give nice results and are easy to understand, while Bayes-based classifiers may have some educational advantage).

That being said, I would recommend anything based on pattern matching, e.g.

Also, to indicate how the neural networks works, you could do some weird things, like guessing the color of the hair based on voice. Then explain that it's reasonable to suspect there is no correlation between the two things in general (esp. if some girls use hair dye), but the classifier learned the voices of the people in class and approximately who has which color, it would fail on someone out of the training set.

I hope this helps $\ddot\smile$

Let me reiterate Roland's and dtidarek's suggestion to use character recognition, and specifically numeral recognition, as a teaching example. There are three advantages to this example:

Here is a seminal paper on the topic that has subsequently been cited more than 1000 times: 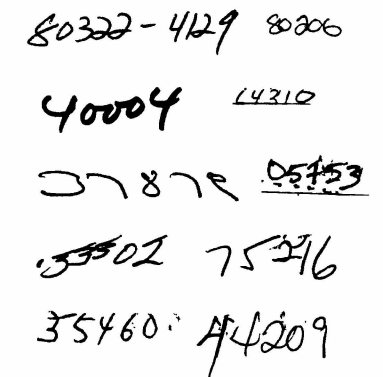 Not the answer you're looking for? Browse other questions tagged calculus secondary-education examples or ask your own question.

14
What is a good physical example of Stokes' Theorem?
12
What is a good prototypical example of a construction that is not well-defined?
7
What real-example of modulo-arithmetic would work for American students?
10
What are some good or neat examples of computing a function's Taylor series?
9
Open-ended tasks for teaching students about integration techniques
22
Is Knuth's suggestion on teaching calculus a good idea?
18
What good is the phrase "Taylor series"?
12
Example of function with *all* the features of differential calculus at first-year level
3
A good example to show group actions and Burnside's lemma
15
An introductory example for Taylor series (12th grade)