Why are these topics this taught in this order?

It seems more natural to me to introduce the quadratic formula, which works in the general case first, and then introduce the other technique which only applicable to special cases.

Secondly, why is synthetic division not taught at all? This would allow students to extend their knowledge of solving quadratic equations to higher degree polynomials.

To help students understand how we move from specific cases to the general case, I created a visual depiction of the process of completing the square. I used shapes analogous to Algebra Tiles, which are a good manipulative for building understanding of factoring as well. I then took the process one step further and illustrated the derivation of the Quadratic Formula. I think the visual is powerful in building understanding. 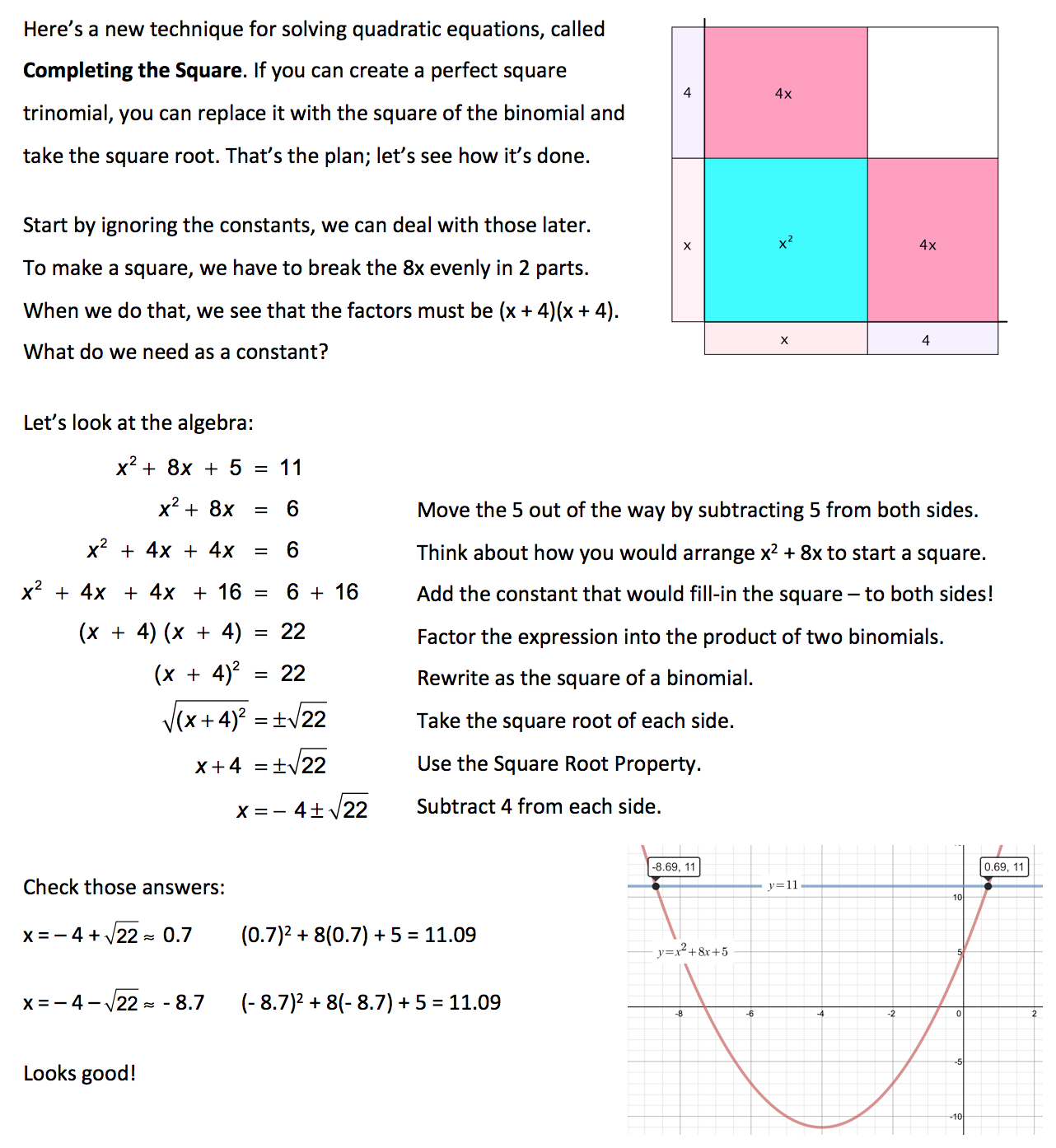 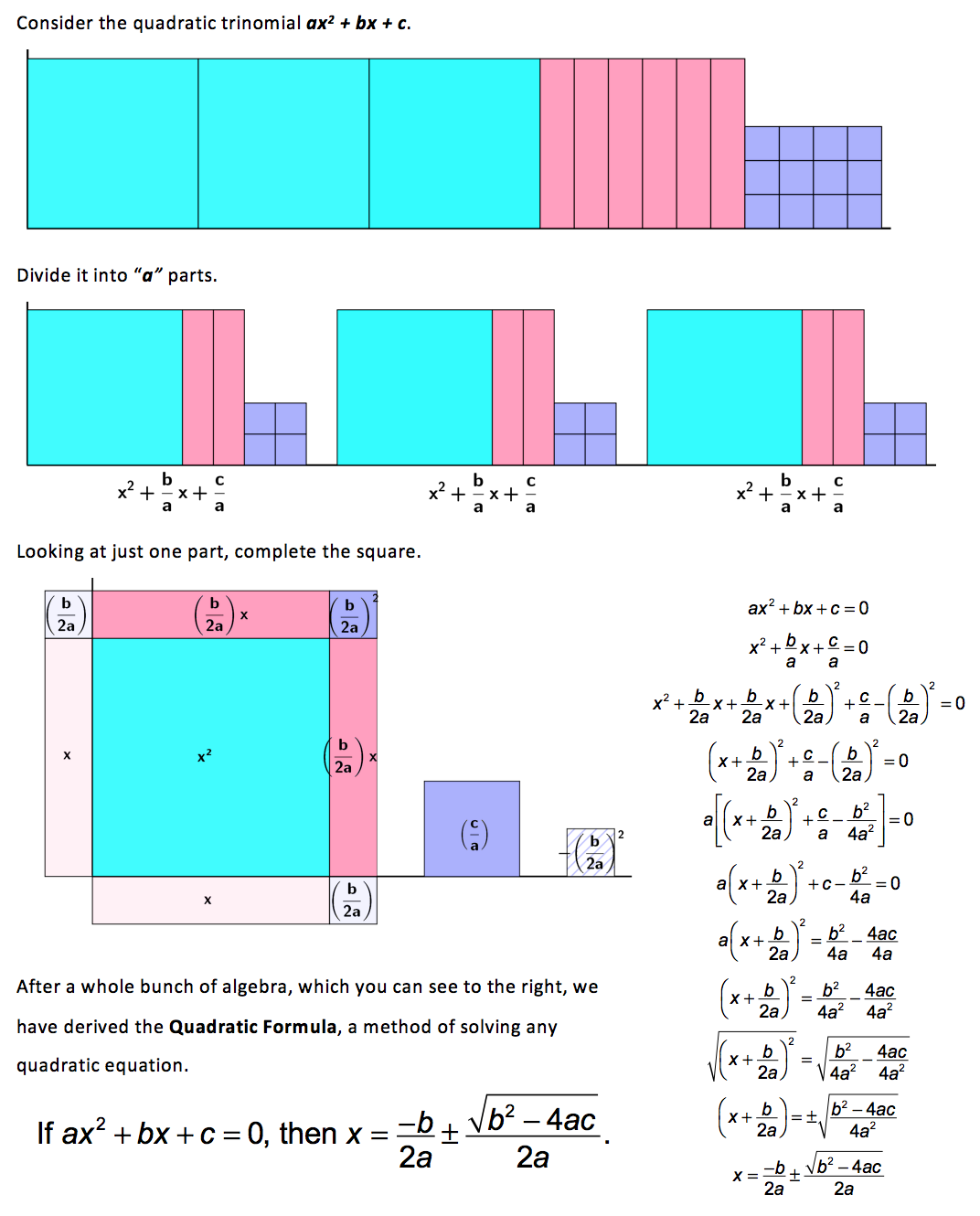 To the first question, I suspect the primary reason is that the mathematical community learned to solve quadratics proceeded in this order - that is, mathematicians realized there were specific, solvable cases before proceeding to the general solution. But I think there are two related arguments to be made for maintaining that order, one historical, one practical.

The historical argument goes something like: We should teach solving quadratics in this order (special cases to the general case) because that order reflects the historical trajectory of the progress mathematicians made while working on this problem. But this argument is stronger than it looks on the surface - the reason the historical trajectory took the path that it did is because, in general, that's often what it means to do mathematics. When confronted with a new and unsolved problem, one of the ways that we make progress on the problem is to impose some assumptions on the problem (e.g. special cases) and solve the more constrained problem. Only after playing in this sandbox for a while does the general solution emerge.

The second, more practical, argument is related: by presenting the general solution up front, students are robbed of the need for it and it just becomes another formula to memorize because the teacher said so. On the other hand, by starting with the special cases, students will soon run into quadratics that do not factor. The limitations of the techniques used in the special cases can motivate the need for the general solution.

This method of "think of $p$ and $q$ so that $b=p+q$ and $c = pq$" is used in the service of factorising the polynomial equation into $(x+p)(x+q) = 0$. The concept that you can factorise and then set each part equal to zero is the fundamental idea of this method, and is in fact a fundamental idea to solving many equations, not just polynomial equations. As such, it's a part of a larger more general method that the quadratic formula is not part of. Often this section of the maths curriculum follows a section where you tell them about noticing a common factor (eg in $2x^2 + 4x = 0$ becomes $2x(x+2) = 0$), and is trying to match with this earlier idea.

The quadratic formula is usually introduced as a "last resort" when all other methods have failed. Personally, I have a sense of power when I think of a way to factorise it, rather than "resorting" to the quadratic formula. I conjecture that many people feel that using factorisation is more "righteous" than using the formula, in the same way that they feel guilty asking a computer to solve an equation for them. While you can argue on the correctness of this feeling of guilt, you can't deny it's there for a lot of people, and many of these people are teaching the students. It is probably worth noting at this point that we don't teach a "linear formula", that solves $ax + b =0$ by doing $x = -b/a$, because there are other more general methods that work just fine.

Another reason is that the concept of writing a polynomial as a product of factors is an important idea even if you are not trying to solve equations. As algebraic objects, polynomials have products and factors the way that integers do, and factoring them is a way of reducing them to their "lowest form". The quadratic formula is a way of solving an equation and is rarely used as a way to find a factorised form. Of course, there is nothing stopping you doing so -- I do find it odd that it is rare to see someone saying that they found $x = p, q$ by the quadratic formula and therefore the factorised form is $(x-p)(x-q)$!

Factors are also a way to strengthen the connection between a polynomial and its graph. Noting that you can tell the x-intercepts of a function from its formula when it is in factored form is a powerful thing. It's cool that numbers pulled out of the structure of an equation written on the page tell you about what the graph is doing. Interestingly, completing the square also strengthens this connection, because when you rewrite $y = ax^2 + bx + c$ as $y = a(x-d)^2 + e$, then you can immediately read off the location of the vertex $(d,e)$. Unfortunatley, I find it rare that students know that completing the square allows you to do this trick. (Note that we do often tell them a bit about this with linear graphs, citing the $y=mx+c$ and the $ax + by = k$ forms of a line that tell you different information.)

Why not teach (synthetic) polynomial division

I never learned synthetic division, and when I saw my South Australian friends do it when I got to Uni I found the whole thing a bit mystifying. (I may have been biased, since I already knew how to do ordinary polynomial division it seemed like a waste of time to learn another method when I had one that worked well for me, especially considering how few polynomials I really needed to divide even in my first year of a maths degree.) When I look at the first few hits of a Google search for "synthetic polynomial division", the explanations there are not particularly illuminating. It is not at all obvious how synthetic division might be used to extend understanding from quadratics to higher-degree polynomials, except for dividing by linear factors until you get a quadratic, which ordinary polynomial division does too.

So perhaps the question is really why is polynomial division (synthetic or otherwise) not taught earlier? I wish I knew. I think it would be great if the process of dividing polynomials was taught earlier. As algebraic objects it makes sense that if you can multiply polynomials then you would want to divide them too, and also it has a nice lead-in to rational functions. As you say, it would allow extension of quadratics to other functions.

I teach it in high school (age equivalents 15 - 17) since it ties in so nicely to the concept of prime factoring in number theory to gain an understanding of what is making up a number. The parallel concept is what is making up the polynomial. The factoring of a polynomial lets us know about reducing algebraic fractions, performing algebraic fraction operations and for solving many quadratic equations. It is formative as it lays a foundation for understanding the general case and as shown by @Jennifer Silverman through completing the square and how there are some that produce integral and rational roots while others have irrational roots.

The power of learning synthetic division is not that it speeds up being able to do divisions by (x-a) but as a conceptual and/or practical tool for evaluating a polynomial function f(x) at x = a. f(a) is the last "term" of the process. Often in computer science classes it is pointed out that when one wants to compute f(a) for a polynomial of high degree one does not want to compute high powers of a large number but use "synthetic" division.

Not the answer you're looking for? Browse other questions tagged secondary-education solving-polynomials or ask your own question.

16
Should Eisenstein’s criterion be taught in high-school?
8
Is there a calculator centered secondary school curriculum somewhere?
14
Advantages of learning different topics simultaneously
14
How the real numbers are taught?
13
Beyond Calculus, an Invitation to Dream Higher for High School
10
Everyday Example Problems for Solving Linear and Quadratic Equations
15
Why is polynomial factorization over the integers part of secondary school curricula?
20
Algebra 2 textbooks that incorrectly claim that all solutions of polynomial equations can be found
20
Why do we teach the Rational Root Theorem? (high school algebra 2)
9
Explaining the intuition for why finding roots of polynomials is hard