How can I demonstrate triangulations of surfaces with real hands-on objects?

For a math circle activity on Euler Characteristic, I'd like the students to be able to triangulate some surfaces and count the number of vertices, edges, and faces of the result.

There are a lot of ways to get a nice big physical sphere that the students can draw on... but what about other surfaces? Have any of you found a nice, preferably cheap way to do this?

To be clear, I am demanding that the end result be a physical object here, and am simply not interested in software that will do this for us. Thanks!

I have used polydrons with 5th-grade students through to college students: 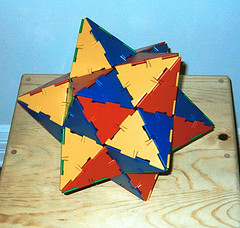 A store in Massachusetts used to sell them, but recently I've had to purchase them from England.
Share
Improve this answer
answered Sep 1 '14 at 15:53

Double Torus: Figure Eight (rock climbing), but could be to small for your purposes.

$n$-Torus: Craft them yourself fronm Polystyrene and cover them with paper to draw upon.

Non-orientable, bounded surfaces: Hmm, not possible, if you really want to draw triangles upon them.

If you triangulate with food markers, you can eat the results.

Instead of finding a pre-built object and drawing triangles on it, we've settled on just building the objects up from scratch using Zometools, which is a more engaging plan anyway.

There is a small problem where when you build a torus out of these toys, it's hard to tell which "faces" are faces and which ones are not, so the solution is to stick your arm through the "hole" in the torus to make sure you don't count the faces that are not really there.

For spheres, balloons would work well. Everyone could have a balloon and a marker and draw their own triangulations. You can imagine the awesome squeaking noise.

An advantage of this would be that people could try to draw really funky triangulations to test if the Euler characteristic actually worked. I feel starting with spheres (ie balloons) and trying lots of different triangulations would really convince people that it really works. Only then is it really worthwhile to try other shapes, in my opinion.

As to the other shapes, play-dough is a possibility, but it's probably a bit too floppy for the purpose. Taking someone else's answer, you could use real dough baked into bread of various shapes, but of course not easy to give one to every student.

Instead of making them smooth, you could make them out of cubes glued together. Cubes don't take too much effort to make out of paper and tape and with enough of them the students could all make their own, triangulate them and group them based on their characteristic.

This has an advantage that you could actually start with a single cube and show it comes to the same characteristic as the sphere. Also, students could easily do it at home if you gave them a cube net they could print. Making it possible for students to investigate by themselves is always a good thing. (This is one reason why I prefer not to use commercially-produced products but things you can find in your home.)

Not the answer you're looking for? Browse other questions tagged topology manipulatives or ask your own question.

5
How to intuitively convince the students that a strip with two full twists is homeomorphic to the standard annulus?