Explanation challenge: Why is a spiral ray-gun difficult to aim?

In an off-topic discussion, I tried to explain to a student why a "ray-gun" that (somehow!) shoots a ray that followed a spiral path would be much more difficult to aim at a particular target (point in $\mathbb{R}^3$) than a gun that shoots a ray along a straight ray. (Added: The spiral has a uniform radius and uniform spacing along its axis.) My attempted explanation failed to get at the essence, and consequently failed to convince. Perhaps the ambiguity is that the notion of what it might mean to "aim" such a gun is not clear. But even with precise knowledge of the spiral's geometry, I feel that under any interpretation of "aim," it is still difficult. 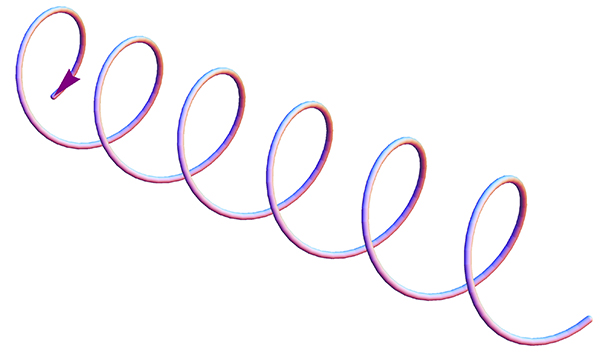 Q. Assuming I am not wrong that it is more difficult, can you think of a convincing way to explain this?

As a sharpshooter in the military (but nothing special, never used it) I would say the big difference is that you can just align things linearly: your eye, the first sight (usually a post), the second one, usually a notch and the target.

I'm assuming a conventional shot here, but even shots requiring windage or Coriolis or drop, can be still be sighted in the normal manner. You just use a vernier to adjust for them, using the sights, but the picture is still linear.

The loopedy-loop thing, you don't have sights to align. Instead, you need to use some equation. Plus, really, you need to know the distance (to know the part of the loop and then to compensate by off angle shot and/or adjustment of rotation phase). But for a straight conventional shot, you just need angle, not distance.

[There is an interesting segue here to target motion analysis and passive sonar (bearing only) versus radar (bearing and distance) and how much harder sonar TMA is. See. e.g. Ekelund ranging.]

To riff off of the ideas I develop in the comments: A unit disk starts off in the $xy$ plane centered at the origin. It is spinning at $\omega$ revolutions per minute, and traveling straight up along the $z$ axis at a rate of $S$ units per minute. A target is located at the point $(1,0,L)$.

You obtain a different "ray gun path" by placing a mark at a different place on the boundary of the disk, and letting it trace out a path. Only one of these paths will pass through the target. To a human eye, all of these paths look qualitatively very similar: If your ray gun fired one beam versus another I doubt you would notice. It stands to reason that it would be very hard to hit your target, since only one out of an uncountable number of choices which are identical looking to you hits the target. Even if you give some width to the beam, say $\delta$, your chance of hitting the target should be somewhere around $\frac{\delta}{2\pi}$, which is not too great. You could, of course, calculate where your beam should start in this case at $(\cos(2\omega L\pi/S),-\sin(2\omega L\pi/S))$, but that is not the sort of thing which would be easy to "eyeball". On the other hand, humans are quite good at aiming things along straight lines, or parabolic arcs.

First we need a definition of "aim" that is interesting. If the gun had a laser sight, you would just wiggle until the red spot falls on the target (assuming, of course, that the laser also travels in a spiral). But that is just going in circles :)

So let's say that we are given 3D coordinates for gun and target, and our goal is to compute a direction vector such that when the gun is 'aimed' in that direction and fired, the target is hit. Thus, we have to determine the shot's axis; the line $L$ through the center of the spiral. But we also have to account for the initial direction of the ray: the muzzle can be placed on any point around a circle of radius $r$ orthogonal to $L$. It seems that "aiming" is more difficult due to our having one more parameter to determine. One would have to find the relative direction $\theta$ from $L$ to the target as seen from the gun, and then determine the initial position of the muzzle, given the spiral parameters and the distance.

However, the line $L$ is not unique. In fact, the is a circle's worth of lines around the target all of which give hits, provided the initial direction is chosen correctly. Once you work out the formula (which I won't do since this is just a conceptual discussion) you can hit the target in infinitely many different skew directions!

In any case, I would say that it is indeed more difficult to aim a spiral ray gun because the formula is more complicated than a straight line equation. This is an anticlimactic answer, but after trying to set up a reasonable model, it is the answer that matches my intuition.

Not the answer you're looking for? Browse other questions tagged mathematical-pedagogy geometry or ask your own question.

18
Why use the word Quadratic?
34
Justifications for: Why learn mathematics?
13
Simpler explanation for finding the vertex of a parabola
4
Monty Hall challenge
29
Why should kids learn how to use a compass and straightedge, and not rely on a drawing program?
7
Why is it difficult to freely change between points and vectors?
8
Why we have to be so precise in Geometry?
4
Are there any list of mathematical constructions which can challenge 12-16 year old students?
3
Explain to 10 year old — Why do 3D mental pictures usually suffice for high-dimensional geometry?