Mathematics and the hermeneutic circle

This leads me to wonder if it is possible to consider a terrible heresy: Is it possible to imagine mathematics without problems?

As ludicrous as this initial idea seems, it may actually be possible.

It is generally believed that a problem is good if it generates a lot of ideas, i.e. if there is a lot of "back and forth" between the problem and a person trying to solve it. Polya, in "Induction and analogy in Mathematics", discusses the centrality of mathematical analogy in mathematics. Lakatos, in "Proofs and refutations", proposes that the nature mathematics itself has the essential quality of a conversation.

These facets suggest a connection of mathematical practice with the hermeneutic circle and the work of Hans Georg Gadamer.

What if "conversation" replaced "problem" in the mathematics classroom?

Question: Has any connection between the work of Hans Georg Gadamer and mathematical practice appeared in the mathematics education literature?

This question is closely related to an answer posted to my other question here.

Yes, there is work in mathematics education connected to Gadamer. One soure for such studies is articles by Brent Davis; more generally, google scholar yields such connections readily.

Here are some examples of BA Davis' work in which Gadamer is cited:

Second, I am not totally clear on what you mean by problem, but here are a couple of remarks about the role of conversation in the teaching and learning of mathematics. (My post, though somewhat long, necessarily elides over heaps and mounds of literature!)

A professor of Mathematics Education once remarked to me that the best problem solvers are those who are good at talking with themselves; this observation can be found more formally in Schoenfeld's (1985) work on Mathematical Problem Solving, in which expert problem solvers distinguished themselves from novice problem solvers by virtue of self-checking / asking themselves if they were on the right track in the problem solving process. For more, see, e.g., my previous MESE response here.

Moreover, features such as accruing mathematical vocabulary and attending to precision when articulating one's (mathematical) thoughts are both consistent with the Common Core State Standards. For example, see the Standards for Mathematical Practice (SMP) and earlier work from NCTM.

The Standards for Mathematical Practice describe varieties of expertise that mathematics educators at all levels should seek to develop in their students. These practices rest on important “processes and proficiencies” with longstanding importance in mathematics education. The first of these are the NCTM process standards of problem solving, reasoning and proof, communication, representation, and connections.

The corresponding SMP is: 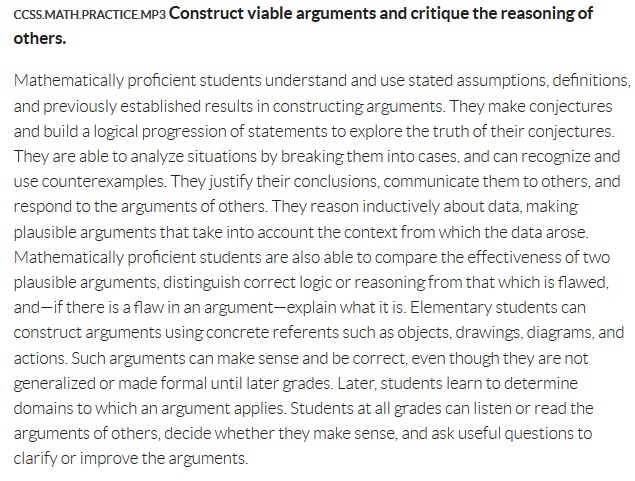 How this manifests in the classroom (or even in a two person conversation) will vary based on the participants. In a healthy mathematics classroom, there should be an ongoing conversation about the new ideas that are coming up. However, engaging in conversation of this nature requires significant background knowledge (both mathematical content and pedagogical) and a fair amount of bravery on the part of the instructor. After all, it is easy to find oneself on the receiving end of a question that is intractable, but not obviously so; it takes a certain deftness to engage with students in mathematical conversation while maintaining the wherewithal needed to move them in the general direction of understanding that a given course intends to develop.

From the perspective of research in mathematics education, one difficulty presented by conversation-based learning is that it is difficult to identify qualitatively how ideas collaboratively emerge. I believe that some of the literature on distributed creativity (e.g., work by RK Sawyer) may be relevant in this respect. On an individual basis, researchers can certainly evaluate student learning before and after units that use discourse-based learning (e.g., using standard pre- and post-tests).

If you are interested in how to implement conversation into the mathematics classroom, then the best recommendation that I have for K6 is the following:

I am confident that these ideas can be implemented in later years, too, and scaled all the way up to the level of research mathematicians conversing with one another.

As to case studies on individual students' understandings of mathematics, the classic piece you are likely to encounter is Erlwanger's article on Benny (link without paywall). More recently, I read a lovely write-up about a young child discussing how she knows number names; the citation is:

Brizuela, B. (1997). Inventions and conventions: A story about capital numbers. For the learning of Mathematics, 2-6.

This leads me to wonder if it is possible to consider a terrible heresy: Is it possible to imagine mathematics without problems?... What if "conversation" replaced "problem" in the mathematics classroom?

I'm going to focus on this other question asked here. Personally, in the math courses that I teach (community college remedial algebra, college algebra, and statistics), I never refer to "problems"; I think that a more accurate description is "exercises". Consider the traditional format of a mathematics presentation:

Part of the political problem with the majority of secondary and undergraduate math classes is the emphasis on "making it useful", i.e., "real world applications", which is to say that they evolve towards standards and standard exams which only assess the 4th item, applications. The conversation about the definitions, theorems, and proofs -- arguably the real "meat" of mathematical thought -- becomes degraded, vestigial, and invisible. So by emphasizing the "real math" part you'd be running head-on against how our political and economic institutions require us all to assess proficiency in the discipline.

That said, I don't think that computational exercises are a bad way of verifying that the concepts have been digested and understood. Generally I wouldn't call them "problems" unless they're of the open-ended, ambiguous, poorly-framed variety. But the truth is in our classes the answers are generally well understood and should be achievable by anyone in the room, and therefore "exercises" is a more accurate and more welcoming description for them. A "problem" only needs one person to resolve it, while an "exercise" is something that everyone should be expected to do. Personally I am rather puzzled why so many people want to refer to the application examples as "problems", when that seems inaccurate to me.

Not the answer you're looking for? Browse other questions tagged reference-request mathematical-pedagogy education-research philosophy-of-maths mathematical-discourse or ask your own question.

15
Calculation versus writing in mathematics
10
Learning counting and addition: fingers or in their head?
18
How much time to spend on a single question?

7
Can music improve math abilities?
29
What do you say to students who want to apply Banach-Tarski theorem in practice?
7
John Dewey and Educative Mathematical Experience
7
Native language, writing, and mathematical problem solving
60
How to get past the "mystique" of Maths
1
Retain problems and combat regression in learning
5
Appealing thinking games, that are easy to make; easy to learn, and easy to play
3
Teaching Mathematics to a Younger Sibling
2
Are there any university programs that "supersize" calculus courses?