How early and how much can you teach kids and teenagers about vectors?

I have met kids and teenagers who I believe are capable of understanding the concept of a vector. However, I have only heard of a select number of schools who teach it to young people. Here's my main question: how early and how much can you teach young kids and teenagers about vectors?

For instance, my mom (who is very smart) somehow managed not to learn about it until I taught it to her. And that floored me because I u see them everyday.

I learned about vectors intuitively in high school through free body diagrams. When I got to college, I was introduced to them formally in Tom Apostol's calculus. But a few years later, I'm stunned I didn't learn this earlier, like middle school.

I don't understand why it isn't universally taught earlier. It seems like a concept that's very applicable and eases learning concepts in areas such as physics. And I know lots of kids who hate math because its boring. So they may never take vectors if it is taught so late in life. Thus a lot of people could benefit if you taught them earlier in their lives. Just say "hey! Vectors are cool and important! So learn about them and you'll like math since they are very useful!" And then show them what you can do with them.

Anyways, I'm looking for a sort of Piaget/development type answer. Example: 5 years old you do adding arrows. 10 years old you introduce scaling in size through multiplication by numbers, etc.

You can teach kids about vectors in the eighth or ninth grade. Basically, when they learn about Cartesian coordinates with x and y (that is, multiple) variables. Because (x,y) is just a vector, when measured from the origin.

Students at that level are beginning to learn about lines on planes. There's no reason why they can't learn to generalize these concepts in multivariate space, that is, to planes in hyperplanes. That will remove some of the artificial distinctions between e.g. "plane" and "solid" geometry. Besides, a knowledge of vectors is a good foundation for matrix theory in math, and for physics in general.

FWIW, I believe that kids can, and perhaps should, be taught linear algebra late in high school (rather than freshman or sophomore year in college). When is a good time to teach linear algebra?

As a solid example, I taught my kids vectors in primary and middle school. I barely had to teach them, it just was common sense to them in the context. Keep in mind that they are good at math, but they are no more able and much less experienced than early High School students. I went the traditional route and did it via Cartesian coordinates and physics. Once you know coordinates, the concept of arrows, vector addition and vector multiplication just come naturally.

I liked the example from kchrisman about adding apples and oranges for the youngest kids. That is seriously no harder than mid primary school to lean the notation, and late primary for scalar multiplication. Of course with no variables.

Dot-product was harder conceptually, but fairly easy mechanically. In physics "it just works", and that is all they needed. Using the apples and oranges example, doing a dot product with the price list for the final cost should be easy for middle schoolers. It is what it looks like on a supermarket docket - so it can't be that hard. Still fairly concrete without variables.

Vector variables for substitution can be introduced just after normal variables. It actually make more sense at the beginning for vectors, as you can use them just to save space writing down and make formulas clearer - while normal variables use the same room as the numbers they are replacing and are no clearer. Normal 1D variables only are useful with generalised functions, which is a more abstract concept than simple substitution in a particular context.

Along with vectors, my kids were able to use a computer algebra system, so once they had the vector concepts, using them was as easy as using single dimensions numbers. Because of this, they already have an intuitive concept of a mathematical "group" or "field" (though not technically accurate) as they use the same addition and scalar multiplication with vectors as the did with integers.

Once you know vectors, much of maths becomes more concrete and qualitatively easier, reducing the age at which students are able to grasp it. Solving simultaneous equations - what is the big deal about? Gaussian elimination is just scaling and adding vectors until you get the arrows you want. It is just like basic arithmetic (not quite - but you know what I mean). Maybe mid high school for 2 equations, later for 3 equations?

It was much easier learning vectors and dot products than learning the 'cos' function - the traditional equivalent. In fact I still haven't really taught them trig - vectors are just too natural and too powerful to bother for most applications. If you know vectors, Pythagorus, and ratios, you can do most things you ever want to do.

Add the ability to transform radial coordinates into vectors, and you have most of the rest. You will need to know unit vectors which is a step up from dot product. But IMHO coordinates of an arrow is more concrete than the ratios of a triangle, early high school should be fine for teaching it. I know that it is really just trig, but it is trig without the yucky trig concepts, just the idea of different ways of writing a vector.

Once you have unit vectors you can learn parallel and perpendicular vectors. Could probably learn at the same time as trig is currently taught. Just involves dot product times unit vector for parallel, and subtracting parallel for perpendicular. So technically just a small step from translating radial to Cartesian coordinates, but it requires some more abstract thinking that suits mid-high school. However, the vector method is much easier to use than trig in a computer algebra system.

I have recently taught them 2D cross product for areas (triangle and rhombus), and that did not come naturally at all, and it is not something they need yet. At least as abstract as trig, but the mechanics are much more down to earth. Direct, easy multiplication and addition rather than via trig ratios. For appropriate problems, it may save you from the sine rule or cosine rule, and anything that can achieve that for even a few problems has to be a good thing! Probably upper high school.

If you want to rotate vectors directly rather than through radial translation, I think complex arithmetic is probably easier than introducing transformation matrices. If the student has been using vectors through high school, complex arithmetic should be easier to understand, but probably best left to last year of high school.

I suspect the biggest problem is that most teachers, school administrators and parents don't know vectors, and it doesn't have the kind of hero worship that calculus has, so it is really hard to get into a curriculum. Combine with the current "back to basics" movement ...

Why so much emphasis on the "physics" aspects of vectors? Are you an engineer? Engineers are accustomed to thinking of vectors as arrows in 3D space that represent force or displacement. Teaching this way brings in the added challenge of geometry and trig.

I think you should start by demonstrating that vectors are just a method of representing information, and not use the Cartesian plane. Vector mathematics are true for collections of objects that might seem less "physical" such as ingredients in a recipe. Most kids would understand how to make their favorite dish (say pizza or cookies?). Vectors are simply a collection of objects obeying a few simple rules. For example:

Then, you take inputs, apply an operation, and get a result. Say, a dot product:

"How much does 3 batches of cookies cost? becomes: 3 x cost of a batch of cookies = the sum of (costs dot ratios) x 3

Now, questions like "what is the domain?" or "what is the vector space?" are intuitive. If they can get this, then it will be a breeze showing them how to apply to 2-component vectors in the Cartesian plane! The rules that you teach for working with vectors are the same.

Anyone who can understand that if you buy five apples and three oranges today, but two apples and one orange tomorrow, then you have seven apples and four oranges at the end, can do vectors. Forget about the physics angle; naturally there is a lot of usefulness there, but this sort of thing is easy to do. Indeed, matrices come up very naturally in such contexts as well - check out any 'business math' or 'finite math' text and there will be a number of very interesting, if elementary, examples.

Why this isn't in the curriculum is a long historical question, probably having a lot to do with our curriculum's generally still being beholden to the Sputnik outlook. That said, I wouldn't introduce the dot produce to a third-grader without a good reason! But vectors are fine, especially if you call them something else like, say, lists.

I recognize that this is not directly answering the question, but I'll proceed regardless. I have had some success conveying some aspects of vectors to middle-school children (in the U.S.: 8th-9th grade), in the context of robot-arm motion in the plane. 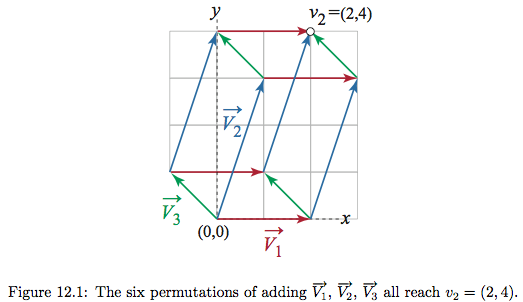 The figure above (from How To Fold It) is an attempt to illustrate the commutativity of vector addition, which implies that a robot arm's links can be permuted without altering the reachable endpoints. Once one accepts this invariance under permutations, non-obvious lemmas can be proved.
share | improve this answer | |
answered Feb 21 '15 at 1:32

Re. How soon for kids?

Consider the following "basket" (in a 3D space):

does not seem to be any harder than the 1D version.

See http://freemathtexts.org/References/AmatycReview/MathUndergroundPDF/17-LanguageAnalysisLinAlgebra.pdf for a bit more.

Not the answer you're looking for? Browse other questions tagged primary-education curriculum or ask your own question.

13
When is a good time to teach linear algebra?

28
Books about elementary mathematics written like a good undergraduate textbook
7
Modern primary-school math curricula (e.g. Everyday Math, Bridges) for accelerated learners
4
Is there communication between junior high math and science departments?
15
Thought experiment: Utopian college-level math curriculum without external constraints
13
How early to start “abstract” math education, or, How to prevent smart kids from never getting exposed to math?
13
Beyond Calculus, an Invitation to Dream Higher for High School
6
Curriculum for Advanced 6th Graders
10
Is short division taught these days and if not, why not?
27
Should LaTeX be taught in high school?