I am interested in comparing mathematics (and also physics) final examinations from all around the world for the highest secondary school qualification in the particular country. Especially I am interested in countries which ranked high in TIMSS/PISA.

For the German Abitur (I am a mathematics and physics teacher in Germany), there are some web sites which collect problems and solutions of the Abitur exams of the last years for example:

So I am looking for similar links for the original problems (and possibly solutions) of the final examinations of other countries (or other examinations roughly equivalent to the German Abitur). Ideally it would be great to have a version which was translated to English (or German) but having the exam in the original language would be sufficient.

I am also interested in comparing older (or even historical) exams of different countries if available (though I didn't find a good link for this even for German exams).

Clearly one might find such resources using a search engine, but because of the different languages and school systems this is not so easy. Because of the international user base, this site seems to be a good place to ask this question.

Edit: It would be useful if you could add some background about the exam system of the particular country or state.

In the case of Germany:

The German exams linked above are part of the German Abitur, which allows you to study every subject in university if you pass it ("Allgemeine Hochschulreife"). The Abitur is slightly different in each federal state, but you can roughly say this:

The Sixth Term Examination Papers are national and public examinations taken by 18 year old school leavers (pre-university), intending to study mathematics at one of the more selective/over-subscribed UK universities.

Although there is a close association with Cambridge University - and are considered to be entrance papers to read mathematics there - several UK universities now ask for grades (although not particularly high) in mathematics STEP.

Because STEP are public examinations open to any candidate, they are based on what is considered to be "core" syllabus concepts. So in some sense, the range of questions is quite narrow, but in practice the questions are usually much more demanding than standard A level, with each one drawing upon a number of different syllabus areas and often requiring the application of standard techniques in novel/interesting ways.

Much information is available here here and in a study booklet, solutions and past papers are available.

For standard A Level mathematics, the UK consists of 7 (yes, 7) examination boards - but information is available here. Both STEP and A Level are directly comparable to the German Abitur. 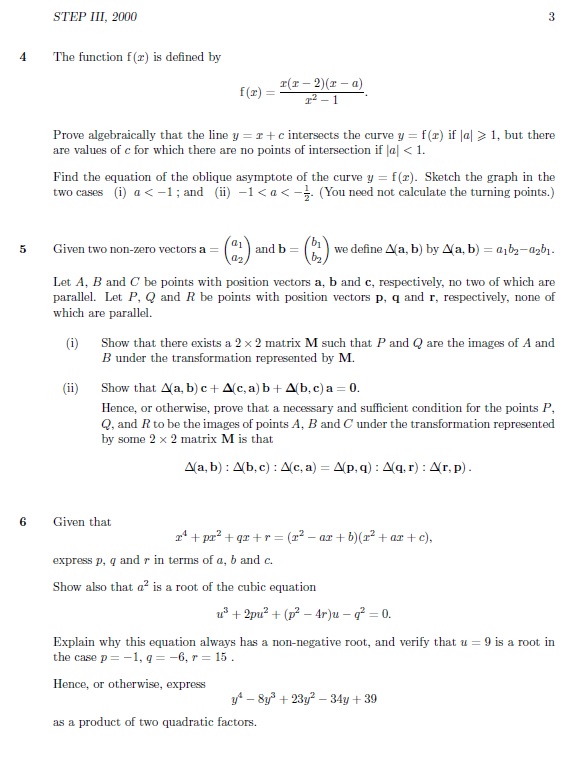 For the United States (NYC, specifically): You can find the archive of Regents Examinations here.

(See also the Regent Examinations wikipage if you are unfamiliar with these assessments.)

The mathematics examinations are available from 1866 through today, though the archive is incomplete.

One prominent researcher of the math regents is Eileen Donoghue, cf. MESE 1820 and MESE 369.

Here is an example of the start of the earliest test in the archive (1866): 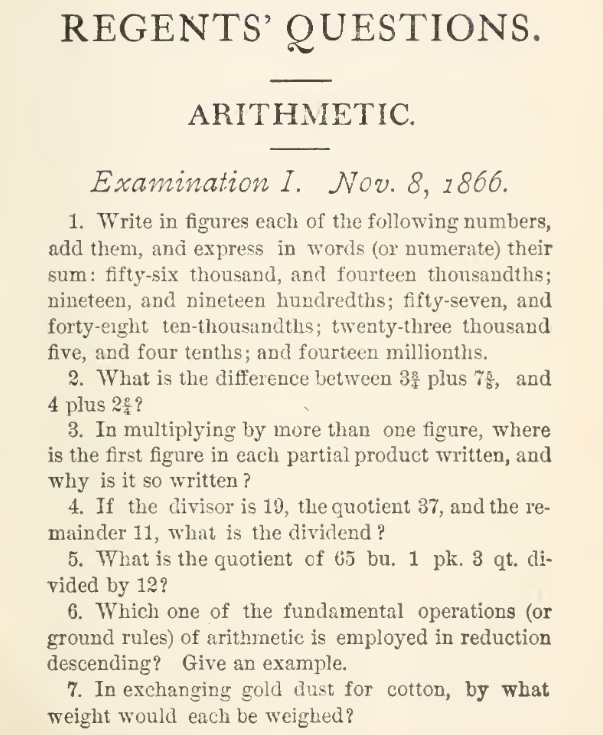 And here is an example of the start of a recent test in the archive (2014): 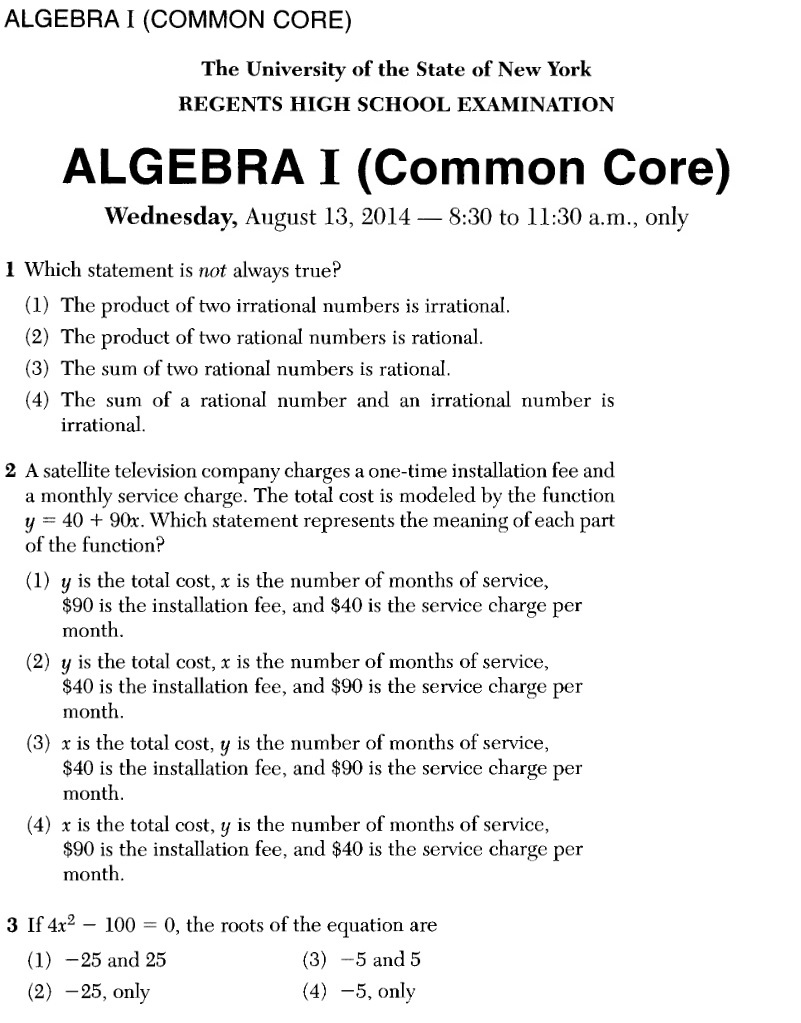 Around 1997-1998 I became aware of some neat math problems on the internet. This was back in the day when you could pretty much find everything of mathematical interest on the internet with search engines and by knowing some places to visit where sites of interest were collected, although in this particular case I might have been led to the problems by a Russian mathematician (student of E. P. Dolzhenko) that I was in correspondence with. At the time I was teaching high school (a specialized math-science boarding high school for gifted students), and in one of the classes (multivariable calculus) I had only 5 or 6 students, all very strong (possibly all now have a graduate degree in a science field, and one has a Ph.D. in mathematics from Rice University), so we did these "time-outs" two or three times a week for the last 15 or 20 minutes of class to work on the problems that I had found on the internet. (Just now I had to go back to some old LaTeX class handouts to get the URLs, then use the Internet Archive to locate valid URLs for them.) The problems are in Russian, but many can be understood without being able to read Russian. It also helped in my case that one of my students was fluent in Russian.

Regarding mathematics problems on the Moscow entrance exams, much has been written about them lately. The following seem to be especially useful discussions of these problems:

Sorry, I do not have the ability to translate these; however, for the high school mathematics exam of China, this website works, search for 会考数学. That means huikao (high school final exam) and shuxue (mathematics).

For the physics use this and from there you can choose which region of China and subject you would like.

For the college entrance exam: 高考

Within each subject, you will find two or three levels (most subjects have Ordinary and Higher level; some also have Foundation level). And within each level there may actually be two papers, which will be sat separately but combined for the overall result. (Papers should also be available in two languages, English and Irish.)

So you will have to fish through the menus to find what you seek, but the information is there, and goes back quite a long way. There have been a few syllabus changes over the years too, of course.

For Finland/Suomi, you can find the official information on the ylioppilaskoe/studentexamen/matriculation examination at https://www.ylioppilastutkinto.fi/en/. This covers all theoretical lukio/gymnasium subjects.

The old tests are officially available at https://www.ylioppilastutkinto.fi/sv/informationsservice/gamla-prov, but not for everyone. They are also documented at several unofficial sites such as https://yle.fi/aihe/abitreenit/matematiikka and https://svenska.yle.fi/abimix/matematik for mathematics (in Finnish and Swedish, respectively). You can navigate those websites for other subjects, such as physics.

The examination is digital. It has been some time since I lived in Finland or had my teacher education there, so I am not sure of the details currently, but what they used to do is to provide a separate Linux-based operating system with programs such as Geogebra, calculator emulator, office programs and more, which one used when taking the exam. The first linked website should contain information about this, though not all of it might be available in English. Swedish should be fairly legible to you since you know German, so taking a look at the Swedish version of the website, too, is a good idea in case of missing information.

18
Was there an SMSG (New Math) "Algebra 2" text?
11
What things should one know in order to enjoy their undergraduate degree?
23
Why aren't logarithms introduced earlier?
16
Would a 1990's educated person need additional content knowledge to tutor high school mathematics today?
3
Examples of cultural limitations on math education

9
How should exam scores correlate to final grades?
12
How do I grade long calculations in a mathematics exam in a fair way?
11
Are there examples of countries where the use of CAS systems or graphing calculators was deemphasized or discontinued?
17
Complex numbers in high school
0
Integrated math curriculum in different countries
13
Is it a bad idea to offer variants of a final exam based on the type of allowed calculators?
6
Courses equivalent to College Algebra in other countries?
29
How to motivate an adolescent who has fallen behind in conceptual development?
16
Is there a math curriculum that is aware of CAS and the internet?
4
Math dyslexia is a big problem for me. I lag behind my classmates