What is fairly new theorem one can teach (and prove) to an undergraduate student?

Many students complain about how old the things in mathematics are. When students finish their undergraduate studies, there are usually not able to state results and prove them which were found after the 1950s (or even older). Of course, the notation has improved and maybe there are some nicer proof for theorems proven far back.

Are there examples of theorems (including proofs) which are as new as possible (at least newer than 1950/1960) and accessible to undergraduate students? Good students should be able to understand the meaning of the theorem and the tools which are needed for the proof should be available – the proof of Fermat’s Last Theorem would not fit into the examples here, although the statement is very clear.

Chvátal's art gallery theorem, a visibility problem in computational geometry, was proposed and proved in the 1970s. 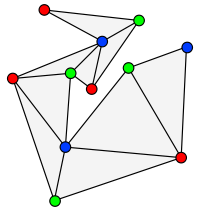 First, the polygon is triangulated (without adding extra vertices). The vertices of the polygon are then 3-colored in such a way that every triangle has all three colors. To find a 3-coloring, it is helpful to observe that the dual graph to the triangulation (the undirected graph having one vertex per triangle and one edge per pair of adjacent triangles) is a tree, for any cycle in the dual graph would form the boundary of a hole in the polygon, contrary to the assumption that it has no holes. Whenever there is more than one triangle, the dual graph (like any tree) must have a vertex with only one neighbor, corresponding to a triangle that is adjacent to other triangles along only one of its sides. The simpler polygon formed by removing this triangle has a 3-coloring by mathematical induction, and this coloring is easily extended to the one additional vertex of the removed triangle.

There are various results of this form, you can find some in a related MO question. But, I agree this is a problem that students often do not learn such results, or might not realize how recent some things are.

What makes this result in my opinion especially well-suited for the intended purpose is that:

For an overview see the link above and for an actual exposition of the proof written at that time see "A proof that Euler missed" by the van der Poorten; and meanwhile even more streamlined arguments exist.

I think that Bhargava's generalized factorial functions fit the bill perfectly. This construction, and the theorems he proves using them, are recent, topical, and completely undergraduate-accessible. Bhargava himself gives a good survey HERE, and there is a nice blog-post explanation of generalized factorials HERE.

Analogues of various number-theoretical results involving factorials, such as the fact that the gcd of elements in the image of a degree $k$ primitive polynomial with integer coefficients is divisible by $k!$, remain true when the integers are replaced by a subset $S$ of the integers and the factorial function is replaced by Bharagava's generalized factorial function $k!_S$. One of my students has been looking at these theorems, including the proofs, and I think that the level has proven to be just right for her to have understood everything and also to have learnt some useful mathematics.

The entire area of fractals was born after computers became easily available. Once the idea of fractals came up, it was easy to prove a lot of theorems about them that were only new because noone thought to pose them before.

The definition of the Mandelbrot set and its properties in particular are a good option for undergraduates.

See this paper for some sample theorems: homepages.warwick.ac.uk/~masdbl/dimension-total.pdf

I can think of at least these two good sources:

a neat theorem that highlights many emerging areas of research such as (un)decidability, cellular automata, Turing completeness, emergence, self-organization, computer science etc: the proof that Life is Turing complete, originally by Conway. Conways original version seems possibly unpublished however there is a version by Rendell that is quite intuitive and there are even youtube videos. the original proof seems to date to the ~1960s.

Are there examples of theorems (including proofs) which are as new as possible (at least newer than 1950/1960) and accessible to undergraduate students?

I understand that you're asking for historical proofs, but this idea that math is something that was done in the past might not be best ameliorated with examples from the recent past.

The easiest way to end up with new proofs and theorems is to help your students ask and answer their own mathematical questions. My favorite bit of writing on this sort of pedagogy is from this post:

I don't really see how this sort of questioning environment is compatible with a lecture-based course, though, so maybe this isn't helpful for your needs.

Here is a nice (basically linear algebra!) theorem from the representation theory of quivers proved by Gabriel:

Theorem. The number of indecomposable representations of a quiver is independent of the orientation of the edges of the underlying digraph. A connected graph gives rise to a quiver of finite type if and only if it is a simply laced Dynkin diagram.

Here is the proof due to Bernstein, Gelfand and Ponomarev which is usually discussed. Another very accessible exposition of this result may be found in these online notes (See §1.8 and Chapter 5).

Mason-Stothers Theorem, the polynomial analogue of ABC conjecture for integers.

More generally, a lot of results from distribution theory are new (distribution here in the probability sense)

In metric fixed point theory, you have Darbo (and Sadovski) theorems. They are generalizations of Schauder fixed point theorem, but instead of assuming that the set (or the mapping) is compact, one assumes that it maps sets into "more compact" sets (using some kind of a measure of noncompactness). (I don't have any reference with me at home now, but one classical source is Granas' and Dugundji's monograph on fixed point theory.) For instance, in Darbo's theorem, you assume that you have a continuous mapping $F$ on a non-empty bounded closed convex subset $C$ of a Banach space and a constant $k<1$ such that $\alpha(F(B))\le k\alpha(B)$ for each $B\subset C$, where $\alpha$ is the Kuratowski measure of noncompactness.

The notion of measure of noncompactness goes back to 1930s (Kuratowski was the one who introduced it, without relation to fixed point theory), Darbo's and Sadovski's theorems are (AFAIK) from 1950s (maybe a bit later).

On a related note, there are quite a few theorems (some fixed-point ones and some others) about hyperconvex metric spaces (a notion introduced in the 1930s by Aronszajn, but first appearing in a published paper in 1956) whose proofs employ simple tools from metric topology, but are highly nontrivial. A beautiful example is Baillon's theorems:

Any nonexpansive (i.e., having Lipschitz constant $1$) mapping of a bounded hyperconvex space into itself has a fixed point.

Both can be proves using quite elementary methods (but rely heavily on the axiom of choice), but the proofs are far from trivial. Both were proved in a paper published in late 1980s.

(For more info on hyperconvex spaces, see e.g. http://en.wikipedia.org/wiki/Injective_metric_space and references therein, in particular the original paper of Aronszajn ana Panitchpakdi and the article by Espinola and Khamsi).

I believe that an introductory numerical analysis course where time discretization of ODEs are treated should respect this and there are many easily accessible results in this direction that can be presented already on an undergraduate level.

The monograph by Hairer, Lubich and Wanner is hardly accessible for undergraduates but a good instructor should be able to extract results which can be presented. Most of these results are from the last four decades.

The whole field of NP completeness in computer science dates from around 1970. Some results are easy to understand (but the proofs tend to be gargantuan until some basic results are in).

Not the answer you're looking for? Browse other questions tagged undergraduate-education student-motivation examples or ask your own question.

23
How should one tutor a student in undergraduate real analysis?
11
Example for a theorem where the (more) formal proof is easier than other argumentation (e.g. imagination)
26
Can students tell the difference between the "definition if" and the "theorem if"?
14
Proofs that make theorems less clear
15
What are some recent, interesting, accessible pieces of mathematics
8
Is there a resource that formally develops the topics of elementary algebra?
16
Is MacLane and Birkoff's "Algebra" suitable today as either an undergraduate or graduate text in abstract algebra?
19
Teaching a student who refuses to learn
32
Taxonomy of bad proofs
12
Proof by contradiction - more than one case