How to explain the difference between the fraction a / b and the ratio a : b?

This paragraph from Adding It Up is a good overview of the context of this question. Rational numbers are complex because there are multiple interpretations (meanings) as well as multiple forms for expressing a rational number.

As we said at the beginning of the chapter, rational numbers can be expressed in various forms (e.g., common fractions, decimal fractions, percents), and each form has many common uses in daily life (e.g., a part of a region, a part of a set, a quotient, a rate, a ratio). One way of describing this complexity is to observe that, from the student’s point of view, a rational number is not a single entity but has multiple personalities. The scheme that has guided research on rational number over the past two decades identifies the following interpretations for any rational number, say 3/4: (a) a part-whole relation (3 out of 4 equal-sized shares); (b) a quotient (3 divided by 4); (c) a measure (3/4 of the way from the beginning of the unit to the end); (d) a ratio (3 red cars for every 4 green cars); and (e) an operation that enlarges or reduces the size of something (3/4 of 12). The task for students is to recognize these distinctions and, at the same time, to construct relations among them that generate a coherent concept of rational number. Clearly, this process is lengthy and multifaceted.

I think it is important for students to understand the connection as well as the distinction between the fraction and the ratio. They can both be written as 3/4. The point to make to students is that the expression 3/4 can be interpreted in different ways. It has different meanings that are mathematically equivalent. So the students should realize that the ratio 3:4 has the same meaning as the ratio 3/4. A second point to make is that there are different forms for writing rational numbers. Using the colon and the bar are just different ways of writing the ratio. As a ratio it is a correspondence of 3 things to 4 things. The students should also realize that the expression 3/4 can be interpreted as a fraction, 3 out of 4 equal portions of some whole. The fraction is a part-to-whole ratio. There are also part-to-part ratios, like one blue dot to 2 yellow dots. Since there are three dots in total, I can also compare the blue dots to the total, giving 1 to 3 as a ratio, or as a fraction 1/3.

Give lots of examples to make it concrete. Answer their questions to clarify the connection and the difference. Then ask them questions and let them explain their thinking. For example, “There are 12 boys and 14 girls in this class. What fractions and ratios can you make from these numbers?”

I find this diagram helpful when relating the two: 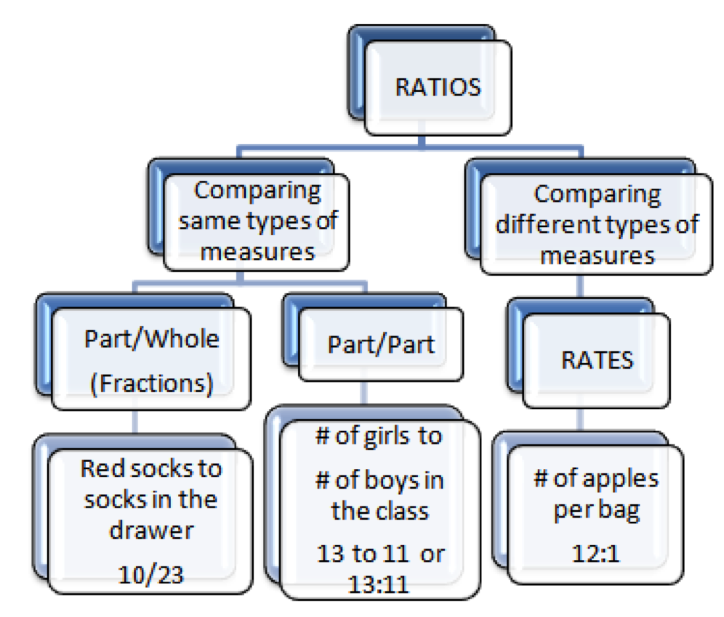 It comes from a model curriculum unit on Rates and Ratios for 6th graders (you can see them all here after registering), and I have found this particular graphic very helpful with math content professional development with 6th grade math teachers.

I always get students to colour in dots. 1 red and 2 blue. Here the ratio is 1:2 red to blue. I ask, "What fraction are red?" Hopefully someone says $\frac{1}{2}$ and we can discuss the misconception. In terms of how to relate $\frac{1}{2}$ to the ratio 1:2 I do it after establishing the equivalence of ratio by scaling up both sides. I want to make green from blue and yellow in the ratio 1:2. I have 2 tins of blue how many yellow? Students often say that's easy just double the tins of yellow because you have doubled the blue. Now I ask them if I had 1000 yellow or something like they say 500 but this time because they recognise there are $\frac{1}{2}$ the number of yellow. A subtle change but one that recognise the proportion of blue and yellow is the same for equivalent ratios. Hope this helps.

I want to build a factory and I go to a bank for a loan, to finance part of the investment cost.

Bankers tend to think in $a:b$: "How many euros we will lend for every euro the compnay will invest". And they tend to have rules of thumb on the matter, say a $3:1$ rule. From the point of view of the company, this could be written $1:3$ and here, confusion may arise more easily, because "$1/3$" should be interpreted as "the compnay will invest one third of what the bank will lend" and not as "one third of the total cost of the factory".

To arrive at this last magnitude the relation is always $a:b \rightarrow \frac {a}{a+b}$

More generally, I think a fraction $a/b$ (which then can be written also as a number, a decimal, etc), is meanigfull only when $a$ and $b$ measure same entities in nature (in my example, money in the same currency). But the concept represented usually by $a:b$ can bring together items that are not alike (say, "$a$ car-accident deaths per $b$ kilometers of highways), in which case there is no meaningful interpretation of $a+b$.

The ratio $a:b$ and the fraction $a/b$ are generally not synonymous and should not be treated as such, at least without making clear their interpretations. In many contexts, $a:b$ corresponds to the fraction $a/(a+b)$ or $b/(a+b)$.

One context, unfortunately familiar to many students, where $a/b$ and $a:b$ are not synonyms is when speaking of odds in the context of bookmaking. That the odds be given by the ratio $3:2$ means roughly that the bookmaker expects the bet upon side to win $2/5$ times and the payout in the event of a win will be $3/5$ of the sum of the payout and money staked. That is when speaking of odds, the ratio $a:b$ corresponds to the fraction $a/(a+b)$ or $b/(a+b)$ (which form is relevant depends on interpretation/use). So $9:1$ odds against means that the horse is not expected to win, so the payout is big if it does, $900$ would be paid on a $100$ bet, while $9:1$ odds in favor (usually quoted as $1:9$) means that the horse is expected to win, and the payout is small if it does, approximately $11 \simeq 100/9$ would be paid on a $100$ bet.

By itself, the word ratio is indeed rather opaque and should probably be avoided. Here is what "is under the hood and usually goes without saying".

From my (by now very remote) experience with 5 graders, I think that the above distinction, measuring sets versus measuring continuous stuff (which, by the way, requires the introduction of units). is quite within their reach.

Warning: what follows may be a bit off-topic but is tightly related to the question.

So, of course, we look at $\frac{1}{3}$ as code for "divide 3 into 1" but the question now is "where to stop the division?" and that of course depends on the real-world situation. That we have rules for dealing with the code, e.g. $\frac{a}{b}\times\frac{c}{d}=\frac{ac}{bd}$ is nice and fortunate but not really necessary: as engineers are wont to put it, "The real real numbers are the decimal numbers".

See Gowers Mathematics, A Very Short Introduction. While spending a whole chapter (7) on infinite decimals, Gowers never even mentions real numbers. And, appropriately recast, the content of Gowers' Chapter 7 should be accessible to 5 grader.

After thinking a while about this question, here comes my first answer on matheducators.SE:

First of all, I would leave out ratios entirely, if possible. They aren't as expressive as fractions are, and fractions are more widely used.

Why are ratios less expressive?

How to explain the difference?

Rice is made with 1 part rice 2 parts water. The ratio is 1:2 rice:water. Or we can say 1/2 the water is the volume of rice to use. Or, as is often the case, you have an odd amount of rice, use twice that amount of water. I once saw my sister fill a 1 cup measure with rice, throw away the rest, and then add 2 cups of water. I asked why she threw out what looked like another 1/2 cup of rice. It wasn't enough for a "recipe". I don't know if she was a bad cook or bad at math, but she could have just measured 1-1/2 cups rice and double to 3 cups water to use.

Ratio is just a single fraction. Whereas proportion is a ratio between 2 fractions.

The basic difference is Ratio is always with respect to some large quantities or superior quantities, whereas proportion is between same kind of quantities.

Division and Fractions have applications in daily life where as ratio being an another form of division and fraction does not find place in daily life applications. Therefore ratio is not an independent entity but a name to refer how many times in a division in context. Probably it is good idea not to teach ratio as an independent entity. Therefore ratio is an application of fractions like percentage, rebate, loss and profit. They all use the properties of equivalent fractions. Proportion too is an equivalent fraction.

There are several possible fractions one could associate with a given ratio.

Say that a recipe for lemonade calls for $2$ cups of lemon juice and $5$ cups of water. This could be expressed with the ratio $2:5$. Here are some different associated fractions:

I don't think any of these fractions has a right to be called "the fraction" associated with the ratio.

Some additional evidence that ratio and fraction are distinct concepts:

The ratios 0:5 and 5:0 both make sense. For instance, you could have 0 parts lemon juice to 5 parts water.

One can have ratios between more than 2 quantities. The ratio 1:2:5, as in 1 part sugar, 2 parts lemon juice, and 5 parts water makes perfect sense. This ratio would be equivalent to 2:4:10 (since the proportions are the same), but there is no single associated fraction.

For a mathematical definition one could use the following:

In other words, ratios are just elements of real projective spaces!

Please don't tell this to your 5th graders.

I'm not sure how you would translate the following into the language of 10-year-olds, but the teacher should first understand this much:

The variables x and y are respectively in the ratio a:b means only that x/y = a/b (for non-zero values of a, b, x and y).

Above while representing ratio in a flow diagram above one branch is represented by part/part. There is no such concept as part/part in fraction form. The denominator is always a 'whole'. While comparing two items one of them should be taken as whole and other as part of the whole.

The diagram in the present form violates the fundamental principle of fraction.

Not the answer you're looking for? Browse other questions tagged undergraduate-education primary-education fractions or ask your own question.

48
Should we say that fractions “are” or “represent” numbers?
18
Models and strategies for teaching fractions in 7th grade mathematics
12
How to teach quick multiplication and division in head?
4
How to intuitively explain the role of transistors in boolean logic and switching?
19
Can students tell the difference between the “definition if” and the “theorem if”?
2
How to explain this trigonometric problem properly?
8
Good metaphor to explain the difference between pointwise and uniform convergence
3
How do you explain the whole integer and fractions subject to a kid in 6th grade?
8
How to explain multiplying and dividing by fractions with real-world examples
3
How to explain to pupils that “$\frac n{100}$ OF $a$” is equivalent to “$a$ TIMES $\frac{n}{100}$”?