At my institution there is an Honors program which encourages (or requires) students to petition classes for Honors. Basically, what this amounts to is the student has to write a 10 page (not set in stone, this is just ballpark) paper on some topic loosely associated to the course. I'm teaching linear algebra this semester and I have an Honors student making a request to do such a project. Now, my default response is to ask them to do some project on tensors and multilinear algebra as I know a little about all that. However, this student also has interest in Game Theory and was interested in a project about Markov chains etc. The problem for me, I don't have a good sense of what would make a nice project in the direction of Game Theory. So finally, the question:

Question: what would a good book, pdf, video series etc. be to provide a framework for an expository piece on Game Theory, or related topics, for someone who is currently learning linear algebra ?

I'm interested in book suggestions, but, also templates for study if you have some passion for this topic. At this point, the student has already studied Gaussian elimination, matrix algebra and after next week, linear transformations from $\mathbb{R}^n$ to $\mathbb{R}^m$. The next third of the course is basic vector space theory from subspaces to a bit quotient spaces. Then the final third of the semester we study eigenvectors, orthogonality, spectral theorem and a somewhat non-rigorous treatment of the real Jordan form.

It would make a nice project to use payoff matrices to describe the Prisoner's Dilemma, and to use that to explore the Nash equilibrium. The Kahn Academy's 10-minute video is a place to start: 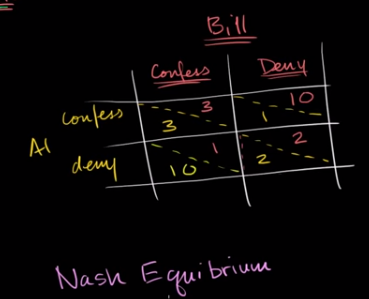 I have looked at a few basic courses which use video lecture series, and you might be able to pick something useful out of them. I don't know what level you are looking at, so they may be too basic for your requirements.

Stanford offers a video lecture series on Game Theory (https://class.coursera.org/gametheory-004/lecture you will need to register for access) though as an intro course I don't think it covered Markov chains. They also have an advanced computational course which also uses video lectures which is not offered on Coursera and which was advertised to people who had done the first course. I didn't do that second course so I'm unsure of the syllabus.

University of Tokyo also offers Game Theory on Coursera, but I have not looked at it.

Other video lecture series that I have found useful is Stanford's Social Network Analysis, also through Coursera. I can't remember if that made links to Game Theory, or whether I got those linked from independent study after the course. Either way, SNA introduces you to NetLogo which makes it easy to investigate Game Theory concepts in networks and Markov processes.

Looking through networked game theory simulations on NetLogo has also been extremely useful. For some investigations, finding the endpoint of the network's evolution is isomorphic to finding the dominant eigenvector, though the software just as easily models non-linear game theory processes.

Model Thinking, also through Coursera, gives very brief overviews of many topics, including Markov processes and Game theory, though I can't remember if they link the two concepts.

All of the above are video lecture series which require minimal prerequisites. There are other courses which I have not looked at which may be helpful to you, and there may be something on the EdX platform, but most of the courses that I have done have been on Coursera, so that limits the range of my recommendations.

If you have the book, you could have your student read in David Poole's Linear Algebra, chapter 2.4, there is a section on Finite Linear Games as related to systems of equations. There is also a section on Markov Chains.

I could send you a pdf of that (those?) section(s) if you are interested.

Not the answer you're looking for? Browse other questions tagged undergraduate-education reference-request examples gifted-students or ask your own question.