Any support for mathematical “learning types?”

Back when I was an undergrad calculus TA, I participated in a general TA training class. We were taught to be mindful of different "learning types," such as visual learners, audio learners, and kinesthetic learners.

It wasn't until recently that I learned there is no evidence that these learning styles exist, (a link to an actual study for completeness).

But I began to think about the different ways my calculus students now approach and accept learning. Some people listen to lectures, go to recitations, and are fine. Others read the book and could manage just fine without any listening to me at all. Still others prefer Khan Academy or this style of presentation.

Is there any evidence that mathematical "learning styles" exist, either characterized by what I mentioned above or otherwise?

I wouldn't count it as evidence, but there is a great reference on this showing Felix Klein's opinions from 1893: 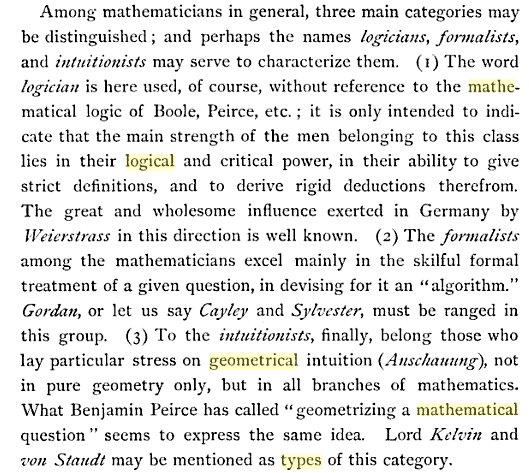 I do not know of any article or study that "proves" that multiple intelligences exist for math (or for what is worth, any other subject). Such a study will be difficult to design and its results will just show some causation between teaching and learning methods, rather than something physiological within the brain. On top of that, research in math education is focused on the elementary grades and most of the articles that cover middle, high school, or college are very rare.

Gardner (1983) has been the biggest proponent of multiple intelligences and his work seems reasonable. The basic idea is that people prefer to learn and do different things based on their dominant intelligence. For that reason, I am good at math (logical-mathematical intelligence), while my sister is good at making friends (intrapersonal intelligence). John Hopkins University has a good page with references on this subject if you wish to research this in more depth.

As a math teacher, it is your goal to leverage each student's preferred intelligence to have him or her learn math. What I see every day is students that don't have a strong logical intelligence give up solving a math problem but they could explain you word-by-word what they think about a problem or students that are able to solve flawlessly a numerical problem grind to a halt when they need to sketch a net of a solid. This might show some correlation between their strongest intelligence and task performance.

To give you another example, let's consider polynomial multiplication. To multiply two binomial, you can use either the distributive property, a rectangle (or area) model, or even stack them and multiply "the long way". The math is the same but its representation on paper is different. I have students preferring one of these three methods. I do not know why, but it could be related to their dominant intelligence (distributive property for logical-mathematical and rectangle model for visual-spatial intelligence).

At the university level, I would expect students to pretty much be sorted out of math if they do not have a strong logical-mathematical intelligence. After all, you will not go very far in algebra if you are not able to use math symbols or follow algorithms. You can, however, see the different learning styles/intelligences in action in an elementary class where students use different methods to perform basic operations. One could argue that the selection of math discipline could be an example of different intelligences in math (analysis vs. topology for example).

I've discussed this several times with other education researchers and it does not seem easy. A learning style (or maybe thinking style) should scarcely depend on the knowledge someone has or specifities of a task or topic. It should rather be a personal preference. As such, it is very hard to describe. If you choose a geomtrical way to learn - is it due to your abilities in geometry, due to the fact that you are learning Pythagoras' theorem or due to your style? To surely identify such styles, you would have to choose tasks with different possible solutions, people with comparable knowledge in the different topics and then try to see if there is a pattern different from random. To my knowledge, that doesn't exist.

Actually, there is a math educator whose research is mainly on thinking styles. Her name is Rita Borromeo-Ferri and unfortunateley she mostly writes in German. Fortunately, I found one paper in her literature list that is in English: Borromeo Ferri, Rita (2010). On the influence of mathematical thinking styles on learners' modelling behaviour. In: Journal für Mathematikdidaktik, 31 (1), S. 99-118. Maybe this will help you.

Intelligence is by no means one-dimensional. The ways that any group of people will identify intelligence are as deeply rooted in cultural norms as they are in those rare hallmarks of exceptional potential to create new mathematics. When people achieve exceptional feats with their minds, who chooses to recognize these feats and how they are recognized is again a matter of social conditioning.

I recognize the diversity in expressions of intelligence, I also worry that these pigeon-holes: learning styles, left/right-brained thinkers*, etc. feed in to the curiosity killing essentialism that I encounter in students who have had demoralizing early math educations.

"I'm just not good with math."

I've found no real connection between math achievement and the likelihood that a students will utter that sentence. It could mean:

None of these things are "learning styles" --none of these things are intrinsic -- some of these things might indicate that one just doesn't enjoy math which is fine. Many more show how math, the sciences and at times education in general has gate keepers and the harm that these gate keepers can do. Most of the time I do not find a students with a strange brain condition that makes numbers mysterious and dificult. I find instead students who have been walled off from picturing themselves mastering mathematics because they have been taught since birth not to imagine such a thing.

I believe we should focus on ways to open all of those closed doors. The primary focus should be achievement not "genius" --

*The left and right brain do seem to delegate tasks, but there is no evidence that anyone has a "dominant hemisphere" --

I think about this often, not just for math but for school in general. Maybe we should group kids not by ability, but on preference of teaching style. Some love the lecture and need quiet time to process what's being presented. Some are hands-on learners, some need to move, some need to mix it up. We've all done one activity that worlds great with some kids but not with others and I think there's a reason for that. Teachers have different styles, as well. Maybe we should match styles with style.

Not the answer you're looking for? Browse other questions tagged reference-request presentation or ask your own question.

13
Immersive attention when learning mathematics
10
Explaining mathematics, giving talks, and using the blackboard as a support
18
Evidence for or against the claim that some students are “algebra people” and others are “geometry people”
11
Importance of exercises for learning mathematics
9
What do you look for in a student presentation?
16
“Always/Sometimes/Never” vs. “True/False” questions for mathematical reasoning
5
Are there any more mathematical journals or websites with the “problems and solutions”?