Use of symbolic math apps in teaching

Symbolic math apps, such as Mathcad, are extremely useful in doing exploratory/experimental math. I've frequently used it to run numerical checks on mathematical expressions I've derived; put up quick plots to understand the qualitative behavior of functions; and manipulate power series, matrices, and differential/integral operators to discover potential relations among number sequences (linear, triangular) for the OEIS and to generate new sequences.

The process of generating numerical checks often reveals gaps in my understanding, leads me to explore other perspectives, and can force me, in general, to organize my ideas more constructively, leading to a deeper understanding of a problem, much as in writing up expository math.

Question: Are such apps being used in teaching "hands-on" mathematics as opposed to or in conjunction with the traditional lecture/blackboard methods? If so, where and how?

Example proplem: Have the students find approximate numerical values for a complex line integral along different easily parametrized paths (e.g., arcs, edges of a rectangle, any such paths the students can come up with) in an analytic neighborhood connecting the two end points. Using Mathcad the students will have to thoroughly understand how to parametrize the contour integral to have Mathcad do a numerical integration. Use an easily integrated function as the first example to provide a check. Then use one that can't be analytically integrated. Discuss path independence.

On a more general note:

One of the disappointing aspects of many video lessons on the Net is that they still rely on the old technique of writing out an equation (useful if you want to give the student time to copy it by hand--unnecessary for pre-recorded material) while talking though it stroke-by-stroke. Incredibly tedious and uninformative when one is already familiar with the notation. I'm interested in guided instruction rather than pure lecturing that takes the students on a journey of discovery (not the least being that of their own abilities at intuiting math). Combo: smart boards, apps, and guidance. Assumption: smart students.

Software, such as Logical Zoombinis, effortlessly teach the very young to use logic in solving problems. Same for the classic board game Clue, and any number of games quickly motivate students to do simple arithmetic. Khan Academy uses innovative techniques, Dan Meyers has a great approach to interactive math learning, and any number of websites have hands-on courses for learning programming languages, such as Udacity and Code.org. Where has the math community adopted innovative techniques at the college level?

This is not an answer to your specific question, but rather offers one example toward the larger question of where has software been used for interactive explorations in educational settings.

The geometry software Cinderella is used for hands-on teaching at many schools around the world, especially in Germany, its source. See this collection of links. 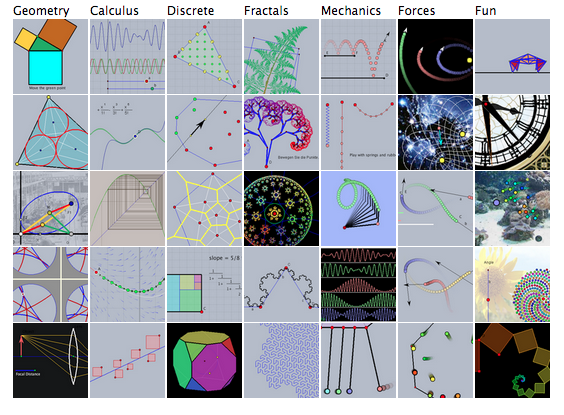 I use it myself in a college-level course on computational geometry. E.g., we use it to understand the dynamics of linkages:

Not the answer you're looking for? Browse other questions tagged mathematical-pedagogy technology-in-education interactive-teaching or ask your own question.

16
How to use a CAS in teaching calculus

8
Adoption / penetration rates for dynamic geometry software in secondary school
16
How to build a class based on Project Euler?
19
Hands on activities for a college history of mathematics course
8
What are the best apps for students to discuss math problems?
13
How early to start "abstract" math education, or, How to prevent smart kids from never getting exposed to math?
5
Teaching math long distance
5
Is there online geometric construction software that models physical constructions?