My secondary geometry class is really amazing and is likely going to finish everything I have for the curriculum with a few weeks left in the school year. I was thinking to use these last few weeks to look into some interesting Non-Euclidian geometries, such as hyperbolic, affine, elliptic etc. Unfortunately, I do not know much about these different geometries (my training is in computer science) so...

I've used Geogebra for creating nets as it is easy to draw joined polygons, but it is not necessary for simply polyhedra. Some regular polygons to trace around maybe? It was often useful to draw graphs of surfaces first before doing the net.

I hope a few of these ideas are at the right level of your students. 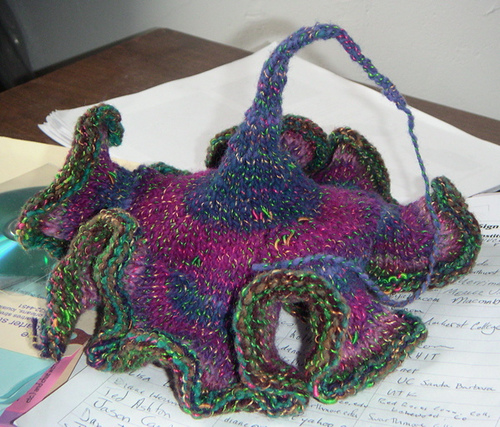 Show your students how to pose problems in mathematics. Get them posing their own geometric questions. What if I change that definition/axiom, for example?

For example: http://www.jstor.org/stable/27970540 [Taxicab Conics!] Or do plain old conics from a purely synthetic approach! The Dandelin Spheres are a beautiful geometric argument that they could appreciate if they got to mess with some conics first.

Do some math history with the them! (Math History Wildberger on youtube)

The most important real-world application of noneuclidean geometry is in relativity. If you use GPS, then relativity is part of your everyday life. General relativity has a reputation for being difficult and highly mathematical, but it doesn't need to be. Here are some resources that let you get at the subject at a fun level:

I also have some lecture notes of my own that might be of interest.

If you can get hold of all of it, Not Knot gives an introduction to 3D hyperbolic geometry in the context of knot theory.

The the various programs by Jeff Weeks are also fun, if focused more towards topology. Playing pool on a hyperbolic surface does at least teach you it's different to Euclidean geometry.

8
Adoption / penetration rates for dynamic geometry software in secondary school
9
Secondary Geometry Curriculum Sequencing?
10
Teaching geometric transformations through fractals?
15
How to teach affine geometry to future high-school teachers?
14
Advantages of learning different topics simultaneously
8
When (and why) did geometric means of more than two numbers exit the secondary curriculum?
17
Learn university maths or train for high school competitions: which is better?
1
Topics for undergraduate seminar for mathematics educators
5
Resources for improving computational skills at the high school/university transition
6
How to Effectively Implement a "Notice and Wonder" Activity?