Constructing and sketching parabolas, conic sections and other curves

Whenever teaching or discussing parabolas, conic sections and other curves with my students, I always feel dissatisfied with the standard "find vertex, pick points, connect the dots" method to draw a parabola. This also applies to higher degree curves, using local max/min, inflection points, etc. I feel like it is equivalent to guess-and-check, which definitely has it's uses, but I would really like to give them more of a complete and continuous way to create parabolas and any other curves. One thing I was thinking was to have students to essentially perform the mathematics behind Bezier curves by marking control points, drawing in the scaffold, subdividing, etc until they arrived at a reasonable construction. I'm just not sure exactly how to go about doing this with regards to specific curves or if this would even be the best way.

Does anyone have any experience, insight, or resources on constructing and sketching parabolas, conic sections, or other curves that is different from just picking points and connecting the dots?

I don't know how I wasn't able to find these earlier...in no particular order.

I believe this is similar to @BBS great answer but also includes constructions for the other three conics by folding paper. Has some pictures and clear instructions.
http://www.mathinscience.info/public/conic_sections/folding_conic_sections.pdf

Here is where things get interesting :) I found this video and was astouned! Seriously, this compass is quite marvelous. Going to Mr. Sardeghi's website yeiled just a brief description and an email address. While I wait for his response, I decided to see what else I could find about him and the CSC. So the address he lists on his website is Google Los Angeles but there is no record of him working there (Linkedin and Google searches, not amazingly accurate i know...). From what I can tell he has been a professor/inventor for the last 20 years or so and has filed multiple patents one of which was for the CSC. However, the patent is registered in Germany. Further searching found a US Patent 5870830 filed by a one Wu Yen-Hung which essentially details the exact tool that Mr. Sardeghi has machined out of metal in the video, albiet his has more frills. At the end of the patent it discusses the Prior Art and mentions the ellipsiograph, another wonderful tool that has much more documentation. Both of these tools require some effort to build/buy but I think they would be so much fun for the kids to get turns using!

Interesting construction of ellipse and parabola, still some "connect the dot" but a much more geometric approach https://www.me.utexas.edu/~rbarr/sketching/conic.html

Has a great demonstration using lights shown on a wall. Depending on the angle the light forms any of the four conic sections, even including a hyperbola if the light is shown through a lamp with a cylindrical shade. Students could trace these on the white board as an introductory activity. http://php.math.unifi.it/archimede/archimede_NEW_inglese/curve/guida/paginaindice.php?id=2

Drawing an ellipse with string is a fun & educational exercise. Clear instructions can be found at mathopenref.com:

One can also draw a parabola with string, but it is more difficult (i.e., would take longer in the classroom). Instructions from the Autralian Assoc. Math Teachers here (.doc download): 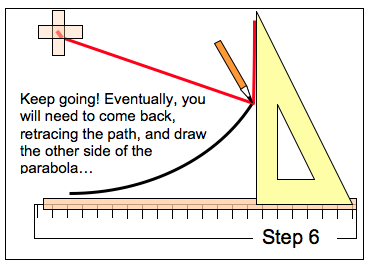 I've got a construction technique for parabolas that's highly involved and requires a great deal of attention from the teacher, but it's really engaging and drives home some of the more obscure parts of the parabola, namely the directrix and focus.

Give each student a ruler, marker, and roughly square section of wax paper. Mark a point a couple inches from the bottom of the wax paper, this is your focus. Using the ruler, draw a line in between the close edge of the paper and the focus parallel to the bottom of the paper, this becomes your directrix. Put away the markers, the rulers are helpful for making good creases when we fold, but not necessary.

This is hard to describe so bear with me. The bulk of the paper including the focus remains on the table, pick up the part of the paper that has the directrix and fold so that the directrix passes through the focus. Make a good crease and unfold. This first fold is parallel to the directrix and makes the line that is tangent to the vertix. Then, pick up the directrix again and make another fold slightly to the side, so that the new fold is just out of parallel. Then repeat all the way up the side of the paper. Once that is done, make the fold just to the other side of parallel and repeat that process. What you're doing is making all of the lines that are tangent to your parabola, and the effect of those lines on the wax paper will reveal the parabola.

If you're trying to talk about the focus and directrix this is a good time to take some measurements to prove that the distance to the focus is equal to the height from the directrix.

This construction will take some practice for you and you'll have to help a lot of your students. A document camera can help, although I don't have one and have done this successfully for several years. I have made a helper before if I had a student after school for another reason a couple days before this lesson, I would teach them to make it and then ask them to help instruct other students in class.

It could be an option to discuss the notion of an osculating circle.

The osculating circle of a (sufficiently smooth) curve at a point is the circle that passes through this point, has the same tangent there (so its center is on the line orthogonal to the tangent) and it even has the same curvature.

There are geometric constructions, but espcially in a calculus context also a calculational approach could be an option.

What about constructing a double cone from paper. Also make some sections using the details from the paper:https://www.maa.org/sites/default/files/pdf/upload_library/22/Ford/apostol388.pdf

Not the answer you're looking for? Browse other questions tagged calculus algebra or ask your own question.

18
What is an efficient way of drawing surfaces in multivariable calculus?
3
Sketching paraboloids on paper

19
A parabolic arc is not semicircular. But students think so
35
How can I help a student who has a "wrong" kind of enthusiasm?