I have been tutoring using my iPad and I love it. Now that I'm moving away, my students have requested that I continue tutoring them online, and I'm not sure I can do so using my iPad anymore. I would like to be able to write freely on my macbook. Any recommendations for a good, responsive, and inexpensive pen tablet that I can use to tutor online with?

Also, any web services for tutoring to recommend? I'm not so keen on signing up with an online tutoring site and having to pay them to use the online classroom. I've found scribblar, but I'm not sure how useful it is.

technology-in-education tutoring online-instruction
Share
Improve this question
asked May 11, 2015 at 21:43

For years Rebecca Zook has been exploring the technology available to help her do long-distance tutoring, and reporting the results on her blog. She has reviews of both hardware and software.

You can of course keep using iPad. One way to do this is to start a zoom meeting with your students and share your iPad screen. Then you can write in a note taking app such as GoodNotes.

The draw back of this method for me is that sometimes I want to show some Mathematica generated 3d models. You can use Wolfram Player on iPad. But then you can not edit the notebook. In this case, I would use my laptop to join the meeting and share the screen. Then I turn on Zoom's annotation function. So I can draw on the shared screen from iPad on top the shared screen from my laptop.

A tip for joining a Zoom meeting with two device is to mute the speaker and microphone of one device, otherwise you may get very sharp noise.

I use a 16" Wacom Cintiq Pro. The advantage that the Cintiq line has over the Intuos line is that the Cintiqs act as secondary displays. There are a number of reasons why I consider this to be a huge selling point.

The 16" Cintiq is small enough to be portable-ish—it is not quite convenient for work at a cafe (are we ever going to be able to work at cafes again?), but I can happily pack my laptop and Cintiq into my bag for traveling. If you need something which is truly portable, Wacom makes smaller Cintiq tablets. 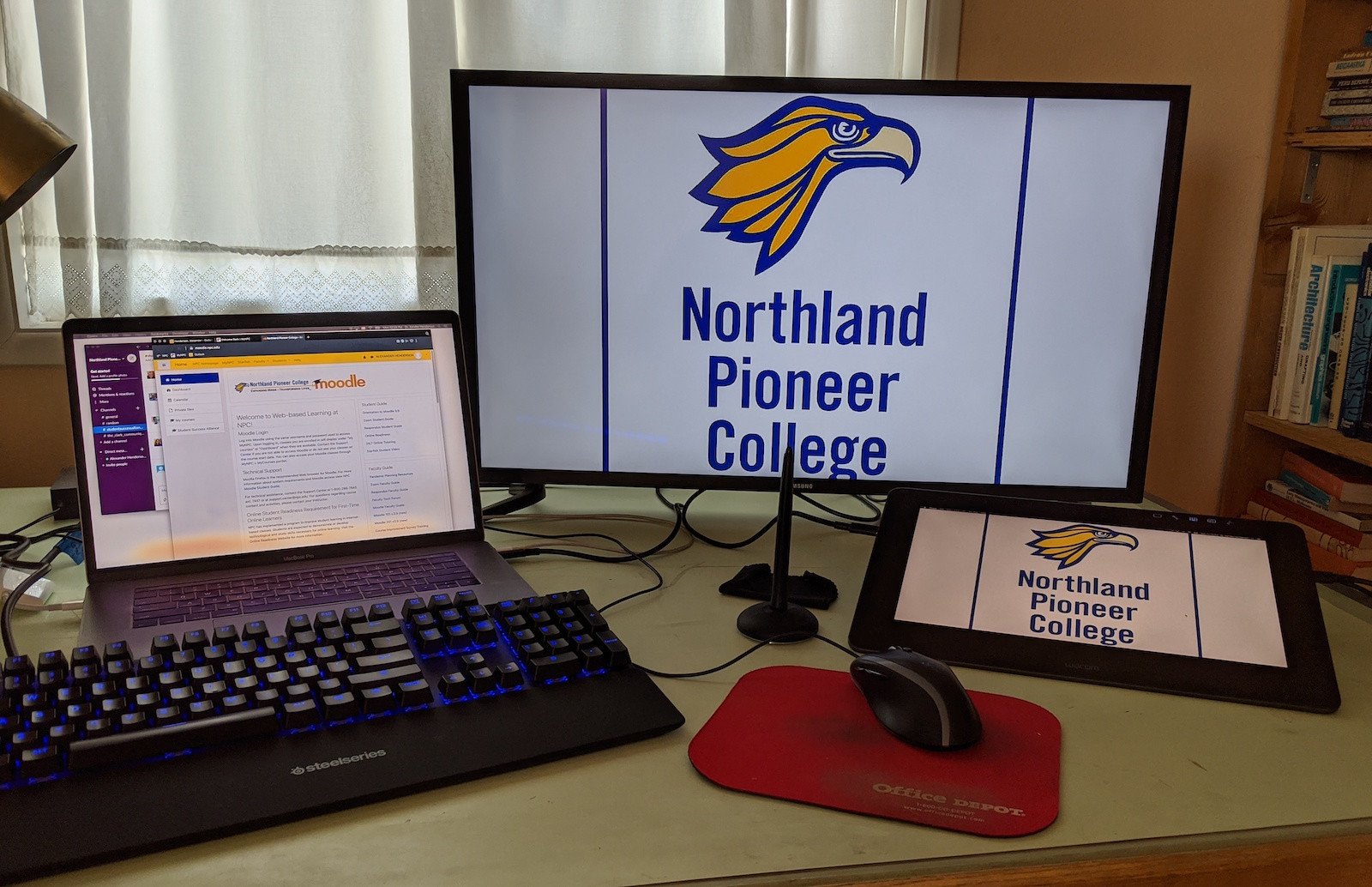 Going the other direction, I have also used a setup with a 27" Cintiq Pro, which was amazing. At a cost of a couple of thousand dollars, I'll never get one without institutional funding, but if you don't need portability, it is a wonderful piece of hardware to have.

I'll also note that, as much as I am shilling for Wacom, I have no connection to them. In fact, before getting my own graphics tablet, I spent some time reading reviews of similar tablets from other manufacturers. A good place to start might be with this list of similar tablets.

With respect to software, I have found that Notability works reasonably well as a whiteboard. The main disadvantage of Notability is that it produces monstrously large .pdf files—I suspect that it is exporting high resolution raster images rather than vectorized graphics. I haven't really tried any other software, so I can't speak much to the relative advantages or disadvantages.

A graphic tablet would be a suitable input device for annotating a shared screen to teach online . I know a very busy online math tutor who uses BitPaper and a XP-PEN Star G640 digital writing tablet every day.

I got a Wacom intuos small a couple of weeks ago after using an iPad for many months. It is only a tiny fraction of the cost of the iPad but is so much better for what I do. I can easily annotate/write on online whiteboards, zoom whiteboard etc. It makes the job so much easier.I would strongly recommend it.

Not the answer you're looking for? Browse other questions tagged technology-in-education tutoring online-instruction or ask your own question.

16
Advice for Tablet/Stylus for Mathematics Teaching
21
Real time interactive whiteboard for tutoring math
2
Can't use samsung tablet in class?
8
How can I get a better result making math videos with a tablet?
10
Delivering mathematics lectures via tablet and projector
0
Recommendation for cheap practical graphics tablet?