Introduction to Topology for 11 year olds

I am planning a 1-hour lesson for a group of 20 11 year olds. I would like to expose them to topology, as an area of research-level mathematics that could be accessible to them. I want to convince them that maths can be visual and beautiful!

The pupils are struggling in Maths (for example are not confident with negative numbers, decimals, algebra, graphs). So an introduction to topology that requires as little machinery as possible would be ideal.

I am thinking of discussing some of the following:

If you have tips or knows of any existing resources then I look forward to hearing from you! In particular, any tips on how to build models or use everyday objects (tasty donuts) to illustrate ideas.

You could explore maps such as the London Underground where the actual distance and locations of stops are unimportant only their relationships. Perhaps this could be turned to a practical lesson somehow? Kids with playing the part of stations and holding string? Design a similar map of their home city? Ranking maps? What makes a good map? You could take the theme in many different directions and return to a real world application.

(1) Form a Möbius strip out of paper. And then cut it down the middle. Restart and cut it at a third of its width. See, e.g., "Explanation for cutting a Möbius strip at one-third its width." 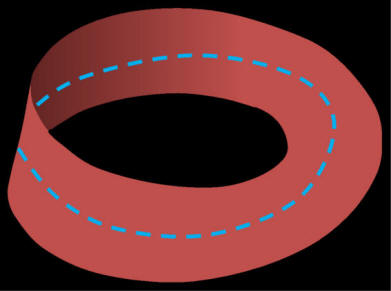 (2) You already cited the previous question about triangulated surfaces, presumably for verifying Euler's $V-E+F=2$. In the absence of (expensive) construction materials (like polydrons), you could fold polyhedra from nets, e.g.: 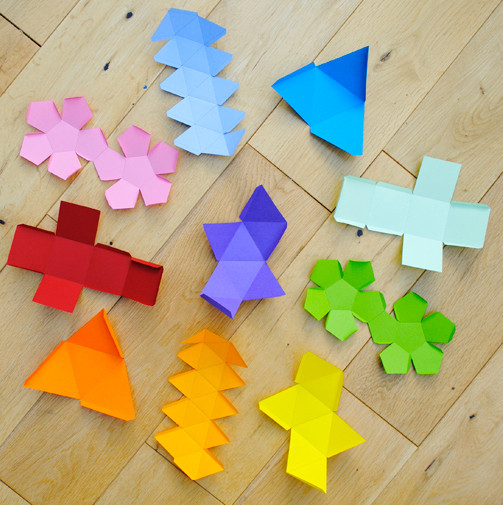 Thanks everyone for your tips! I thought I would share what we decided to go for in the end.

We had far more material than this (it naturally extends to the investigation into mobius strips, but in an hour this is a good amount of material. Even for top set Year 8 students, who we also did this lesson with in the end).

What surface is the game "snake" played on?

I recall a cute introduction to the work of Miryam Mirzakhani that is written at the level of a younger student. Something like this could be adapted and incorporated into a 11-year-old's math curriculum. Here is the link to the infographic on Matific. It talks about surfaces and the genus of surfaces and is reasonably well explained. Keep in mind your 11-year-olds might not have a firm grasp on the difference between two dimensions and three dimensions. Upon arriving there you will need to evaluate what the students are able to understand by possibly asking a few fun get-to-know-you questions that double as assessing their geometric ability. They might not remember the difference between a circle and a sphere without being reminded.

I remember that when I was 11 or so, my dad had me imagine games being played on different surfaces and how the rules would change. He also taught me about donuts and coffee cups being topologically equivalent, and had an amusing obsession with the Klein bottle and Mobius strips (I think this has some decent explanations for that level, and some of the examples it describes could be used as manipulatives.)

Additionally, there are many manipulative topological puzzles that 11-year-olds could spend a class period on trying to solve in groups. You can get these (with metal rings, ropes etc) at Barnes and Noble or many novelty stores if you don't want to order online. In fact, even the Human Knot might be a decent introduction into knot theory. If you did it multiple times or multiple small groups, your students might realize that not all of their "knots" could be fully untangled into a single circle. Students could also draw Celtic knots or do the Handcuffs puzzle with each other.

Regarding triangulation. Small groups of students could have a balloon and a sharpie. Instruct them to draw on about 4-10 dots then connect as many dots as possible to create a triangulation, then count dots and edges. You WILL have to give extremely clear instructions and demonstrate this along with them. You may also want to give them two colors of sharpie or give them a tool to help them avoiding miscounting so the entire time isn't spent counting edges. Doing in groups will help keep them from getting over taxed -- each student could count something different.

Apologies that I don't have many examples of the advanced concepts which you have mentioned, but hopefully these are some hands-on ideas that can get them excited and interested. In general, because these 11-year-olds are struggling in math, manipulatives and hands-on activities are a good idea and will engage them much more than doing examples. One hour isn't much time with 11-year-olds, and unless you're planning on giving a lecture (which wouldn't be age-appropriate), I'd plan on covering maybe one or two of those concepts.

While the geometry of surfaces is a relatively quick starting topic it does not seem to me that it is the ideal way to show an 11 year old how much geometric insight can be obtained without metrical information. My favorite example for introducing topological ideas is "Euler's traversability" theorem which says that a graph (diagram of dots and lines) has a "closed tour" - one that starts and ends at the same dot (vertex) that traverses each edge of a connected (one piece) graph once and only once if and only if the graph has all its vertices even-valent (even degree). This result can be discovered by a series of examples posed to a "beginner" and often a beginner can see the parity argument that can be used to prove the result in one direction, and also the way to design an algorithm to find such a tour in the other direction. There is also the fact that many applied problems such as snow removal, pot-hole inspection tours etc. have this theorem as a jumping off point. For these applied problems one needs to look at what is often called the "Chinese postman" model, which builds on the traversability theorem.

You might try a couple of puzzles near the middle for them to think about, and see if they can come up with the answers. One of my favorites involves a (topological deformation of) two-holed doughnut with a door handle going through both holes, and attached to a door, naturally. The idea is to deform the doughnut so to free one of the holes. (You may be able to make a string model to demonstrate, or draw a picture of before and after.) Another is the trick involving a coffee cup: you hold a filled cup in your hand and twist your arm around twice while not spilling the cup's contents. You can also talk about Euler's formula for graphs drawn on one and two-holed surfaces, and mention that it isn't a geometric result so much as a topological result.

How about giving them the five room puzzle on the plane and then on the torus? This is a rather visceral way to appreciate why "holes matter", and may segue nicely into topics in topology.

You could do something in knot theory, for example: 3-colorability of a knot. The wikipedia article http://en.wikipedia.org/wiki/Tricolorability shows a proof of isotopy invariance which should be understandable to an 11 year old.

Not the answer you're looking for? Browse other questions tagged secondary-education topology or ask your own question.

16
Explanation for cutting a Möbius strip at one-third its width
19
Teaching manifolds to high schoolers
3
How can I demonstrate triangulations of surfaces with real hands-on objects?

18
Computational topology for engineers
4
Determinant applications for 16 year olds
7
Topology presentation for middle school
5
Reference request: undergraduate combinatorial topology
6
Textbooks for an independent study in point-set topology
12
Why should or shouldn't we teach functions to 15 year olds?
7
When working with 12-16 year olds, how should I graph functions when the domain technically isn't $\mathbb{R}$?