Does it make sense to speak of whether the standard deviation is a "good measure" of some particular distribution?

I came across this question (picture below, the question where the drop-down bar is highlighted) on edulastic.com.

The answer, apparently, was that "The standard deviation is a good measure of the spread of the distribution for Freshmen."

What is the rationale for this? Or does this question simply not make sense? 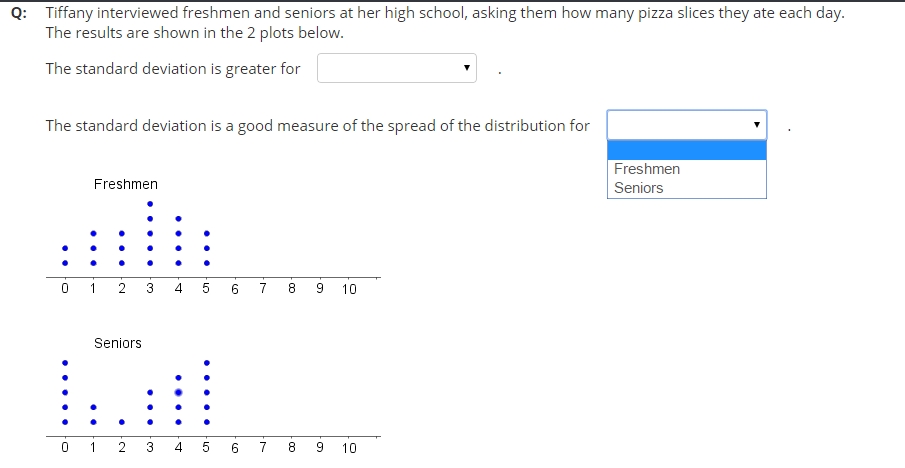 People do speak that way, and therefore it has some meaning, even if poorly and indirectly expressed.

If someone says "the standard deviation is a good measure of the spread of the distribution for Freshmen", I interpret that as roughly:

I would prefer to talk this way instead, and I would prefer talk of medians and quartiles even more. Meanwhile I can accept the way that people talk now.

So "standard deviation is a measure of dispersion around the mean", of how "far on average" are the actual observations from their mean value.

The mean itself is a useful summary measure of the distribution of the data, if it represents indeed a focal point, a concentration point, a point around which the actual occurrences tend to cluster. But this implies that the mean is useful when the distribution is a) unimodal and b) has occurences "to the left and to the right" of its mode (maximum). Then the mean gives us roughly the value around which occurences hover.

But when the data is not roughly reminiscent of a "symmetric unimodal" shape (as is for Freshmen), but has the appearance of the distribution of Seniors, then the mean itself stops being really useful as a measure of concentration: evidently, Seniors occurrences do not hover around the sample mean.

That said, it's a bad question. Better would be to talk about whether data fits a normal distribution, or the degree to which it does. But using words like "good" in math problems seems problematic to me.

7
Teaching the difference between standard deviation and interquartile range
10
Passage from Descriptive to Inferential Statistics - analogies with other Math-fields?
12
Where can I find realistic data for college-level elementary statistics problems?
8
How to teach steady state in queueing (if at all?)
4
What is a realistic situation that illustrates precisely what a p-value is?
5
How to explain even higher moments
3
Fun, impressive, or compelling examples of scaling of the standard deviation like $1/\sqrt{n}$?
12
Are these assumptions in statistics correct or beneficial?