What are some of the qualities that accessible textbooks share?

Many, perhaps most, math textbooks are very hard for most people to dive into. A few textbooks are delightful, and encourage people to learn math by their engaging tone. What textbooks have helped draw you into the subject, and what was it about them that did that? What recommendations would you give to an author based on your experience reading good and bad textbooks?

[I am asking this question because the closed question "Why are most math textbooks so uninspiring; unless you already like Math?" seemed like it raised an important point - which needed reframing.]

Among many other distinctions: textbooks that are stern, hostile-skeptical, unconfiding, are obviously-reasonable construable as "unfriendly". That is, if the author makes clear that you, the reader, are unworthy, and probably unable to understand the point anyway, it's off-putting. Similarly, as we know too well, it is possible to take a similar adversarial/hostile approach in "teaching", and students often default into an assumption that this is the case... which combines in a bad way with such a textbook.

The hostility can be veiled, as in text that is primarily definitions and theorem-proving with few examples, and "exercises" that are exclusively the working-out of the standard examples and counter-examples, but without any models in the text proper. Thus, a bait-and-switch on the reader, sometimes rationalized by the mythology that "problem-solving" is something that students can be coerced into, rather than shown by example, etc. Also rationalized by the unfortunate mythology that upper-division math starts to become a "test of talent", offering believers in that an excuse in case they're inadequate teachers, etc.

I see the same issues of "skepticism", let's call it, and "(passive-aggressive) unhelpfulness" appearing in texts and "teaching" throughout undergrad and graduate-level teaching at my R1 university. I've heard rationalizations that "if there are no losers, winning is meaningless"... and codeword "challenging" for unhelpful texts.

There're also the misleadingly-thin texts whose text is definitions, with most of the major theorems left to the exercises. Ack. Really nothing attractive in such a thing.

Sources (written or live) that show fun things, live(ly) examples to pique curiosity prior to "definitions", rather than throwing the important examples into an ocean of exercises so they'll be lost among drill-and-kill stuff.

Many people who're "successful" in mathematics have developed a resistance to that toxicity, although it seems to me a sad waste of energy to have to defend oneself in such fashion.

Somehow the style of mathematics textbooks has mostly drifted into fairly extreme stodginess and fussiness, although some of this seems to be merely meeting societal expectations (in the U.S.). It really cannot be that every detail is as important as every other, yet this seems to be a common presentation... seemingly compelling the reader to have to suspend their own judgement for the whole business to make sense, such as it may.

Worst-case: "math as rules handed down by authority" (The State, possibly?) No one should respond positively to that. :)

But the "standard curriculum(s)" I see in U.S. high schools and undergrad mostly seem to be the most inertia-laden of any part of the larger curriculum, and even many parents and students have a powerful expectation that math will not be interesting or fun, and will actually react badly if it is made into something else. I've had people (both students and parents) privately tell me that the best features of "math" do involve it being "a test of character" for them or for their kids. Yikes! :)

This creates a bizarre environment for successful (=adapted) text-book writing...

I have no doubt there are more modern textbooks, but I found Fraleigh a fine introduction for unsophisticated undergraduates:

The many short chapters, with both self-testing T/F questions, and achievable exercises, makes it easy on both the teacher and the student. He includes historical remarks, copious examples, and distinguishes in exercises between: computation, concepts, theory, and "proof synopses." 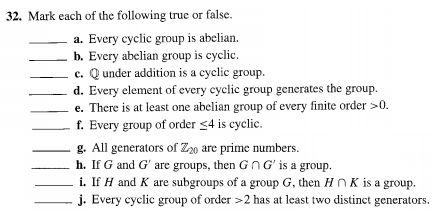 I wish I could remember more about why I found these books engaging. Although some of it is presented in a near-conversational style, I think a selection and arrangement of topics is also important. Two examples from my undergraduate education are Martin Braun's Springer undergraduate text on differential equations and applications (I fondly recall the section on the Tacoma Narrows Bridge collapse) and Munkres's undergraduate Topology text. A further example is Concrete Mathematics by Graham, Knuth and Patashnik. Each of these gave me the impression they were written by humans, or at least mathematicians who were willing to show a human side. However, I found none of these as engaging as books by Martin Gardner or Isaac Asimov.

I wouldn't mind having a Gardner or Asimov-like guide to read first. After that, I might be willing to tackle less friendly texts once I have had someone reassure me as to what was going on, and why some concepts were key to understanding the rest.

Here are some examples of really accessible textbooks:

In my opinion, the best textbooks take an approach of:

These books tend to be well-organized, with big fonts and clear summaries. They emphasize "you can do it yourself" sanity checks rather than proofs.

What makes a textbook engaging:

I read Henri Roudier's Algèbre linéaire (in french) after reading Serge Lang's book. They are polar opposite in term of exposition, clarity, engagement and efficiency. I was forcing my self to read Lang's book back then to learn linear algebra but it doesn't seem Lang put any effort in this book; maybe he finished it in a year or two while copying the first chapter from his other books. It feels more like a handbook of theorems than a textbook.

On the other hand I read Roudier's book without much difficulty. While reading the book you feel like the author is human, like he's your professor in class or your more experienced colleague. He explains the concepts and motivate them, he proves the theorems and gives many remarks about the utility of these results, he warns you about common mistakes or abuse of notation, etc. The book is better than most of the famous linear algebra books.

For abstract algebra there's Godement's book. Not as engaging as Roudier's but still very clear.

3
Why are most math textbooks so uninspiring; unless you already like Math?
11
How to write a book for someone who learns math alone?

29
Books about elementary mathematics written like a good undergraduate textbook
15
Cost and benefits of compartmentalization in k-12 curriculum
17
Linear algebra textbooks presenting an eclectic, geometric approach to the subject
43
How to respond to “solve this equation” in a basic algebra class
3
What are standard (or good) textbooks for undergraduate graph theory?
8
Structure of math textbooks
2
Is "The Petersen Graph" by Holton and Sheehan a good text for graph-theory students? Any requisite knowledge for mastering the text?
8
What famous graduate math textbooks use color?
5
Why are most college level math textbooks black and white only?
6
How do math professors select textbooks?