Approaches to Teaching for Questions Around Partitioning Space

My students are preparing for their SATs and have problems with a certain type of questions, i.e., questions involving a geometrical figure and $n$ (usually $n = 2,3$) straight lines passing through it. The maximum number of regions that the figure can be divided into is asked.

I generally look at the options given and try a hit and trial method.

Question: Is there any other approach to problems like these which I can recommend? 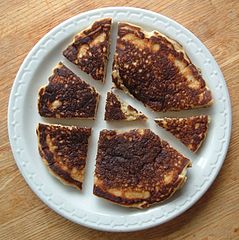 Since Joseph O'Rourke, in his response, has linked to the lazy caterer's sequence, let me also mention its three-dimensional analogue, the cake number.

In this case, we are dividing three-dimensional space with planes. The original question asks:

I generally look at the options given and try a hit and trial method. Is there any other approach to problems like these which I can recommend?

The main reason that I post this is to point to a video from the Mathematical Association of America (MAA, 1966) entitled, George Polya in "Teaching Us A Lesson" or Let Us Teaching Guessing: A Demonstration with George Polya (vimeo link).

(If you open the video, the former title includes a misspelling of Polya's first name, and the latter title lists the year as 1965, though IMDB has it as 1966. But let us not get bogged down in the details!)

Since you ask about approaches to this problem, perhaps there is something to be gleaned from Polya's approach. His advocating for "guessing" may seem similar to your approach of "hit and trial," but Polya distinguishes between wild guessing and careful guessing.

Polya is an important figure in mathematics education (and mentioned with some frequency on MESE; see, e.g., here) and so I recommend this video, one, because it is directly related to the original query, but two, because it provides the opportunity to see (what I — and at least David Bressoud) consider to be a favorite student activity!

Not the answer you're looking for? Browse other questions tagged secondary-education geometry students-mistakes or ask your own question.