Teaching about absolute values not centered at $0$

One of my peers is studying for the GRE and ran into the following problem:

Does anyone have any suggestions for teaching this to someone with a high-school-math background?

First, concerning your tentative explanation: the status of '$x$' is something difficult to convey and inherently subtle. I guess you ran into this issue at least as much as into the absolute value issue. One thing that needs to be told is that as a variable, $x$ is a placeholder just meant to say that its various apparitions in a formula like the one you wrote, all denote the very same number. Try explaining that by replacing it by another letter which you replace by $x-4$, or use sentences like

Concerning the absolute value issue, you can add other ways to see it (like above: a non-negative number having the same magnitude as the given number ; or the distance to the origin) and explain why they all give the same result. Once this meaning is understood, you can go with formal resolution of the problem. In my experience, trying to get to the formal manipulation of mathematical symbols before they make sense usually causes trouble.

Added in edit: I must say that reading other answers makes me realize that, while I still endorse mine, I kind of fall in the French pitfall of being quite abstract and formal. One should definitely read also the answers below, and notably consider visual explanations and tackle particular cases.

I think it is very important to stress that the absolute value of a difference of two numbers computes the distance between these two numbers on the number line. For one, it gives a concrete geometric meaning to an otherwise abstract concept. As well, the distance interpretation generalizes well to higher dimensional situations encountered later on.

I am a big believer in visual learning. Showing instead of telling.

This is $y=|x|$. (I sometimes start with $y=x$ and then discuss what the absolute function means). This function translates, shifts, like any other. 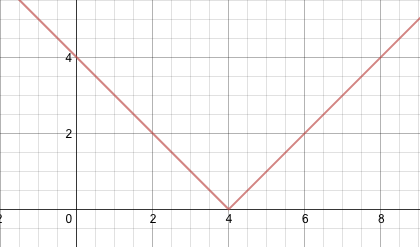 This is $y=|x-4|$ and hopefully, the student's algebra level have them understand why the shift was right. If not, you have a bit of explaining. 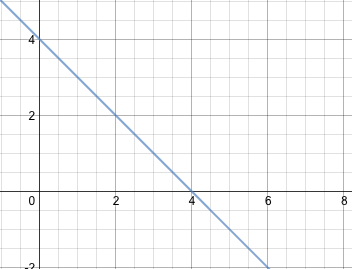 Last, is $y=4-x$ and by comparing the two graphs, you can see where and why graph 2 and graph 3 are identical for X<4 (or equal)

I have many students walk in to my room and ask about a topic that leads me to whip up fast graphs. More often than not, they ask why the teacher didn't do this from the start. (And I know that statistically, I'm only getting students who are not understanding, so it's likely that 90% are getting it, but for those who don't, this offers the visual way to explain)

Going beyond the good answers here that have been given, and which work for teaching in a classroom, one could instead focus on pliable strategies that work well on GRE exams. When I tutor students for GRE math prep I always emphasize tables of values as a tool to remember. In this case a quick production of a table like this

One observation that should be made: Absolute value does not produce negative numbers. If 4-x is negative, it can't equal the output of the absolute value of any expression. So 4-x must not be negative (if it is equal to the absolute value of something). So 4-x >= 0. So the first consideration shows that 4 >= x is necessary. If the student does not understand this, there are bigger issues that need resolving first.

Once necessity is made apparent, you can move on to sufficiency using material from the other answers. For example, knowing that absolute value (in the context of x-4 being a real number) is either x-4 or -(x-4)=4-x, then you check that (4-x) >= 0 is sufficient: if 4-x >= 0, then x-4 is negative or zero, and you can check those cases mechanically.

Not the answer you're looking for? Browse other questions tagged algebra precalculus or ask your own question.

17
Are teaching about finding the missing member(s) of the sequences really appropriate?
19
Good way to explain why an absolute value in an equation does not automatically mean to make the other side +/-
8
How to convince the students of grade 8 that $\sin 90^\circ =1$? ( calculator not allowed )
11
Logarithm Tables - How were the values reached?
12
Teaching Completing the Square
13
Examples (for beginners) of real functions which are not given by elementary formulae
3
How to word this exercise about converting "English" into interval notation?
2
Appropriate context for teaching derivative (undergraduate/graduate)