My daughter showed me the picture below, which came from 9GAG. It shows a question on an exam asking the student to "use the repeated addition strategy to solve: 5 x 3." The student answered "5+5+5" and the teacher gave the answer a one-point deduction, stating that the correct answer is "3+3+3+3+3." 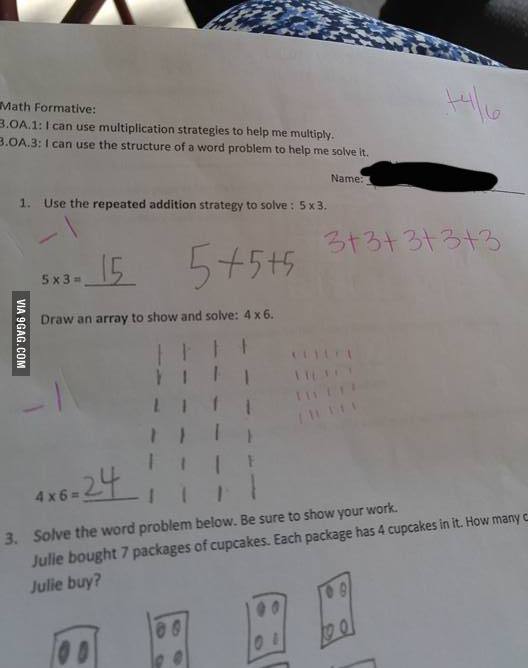 I have not seen any textbook that defines the notation $a\times b$ (where $a$ and $b$ are positive integers) as $b$ added $a$ times.

Personally, I prefer to use $a\times b$ to represent $a$ added $b$ times. This is to be consistent with using the notation $a^b$ (where $a$ and $b$ are positive integers) to mean $a$ multiplied $b$ times.

What official document defines $a\times b$ (where $a$ and $b$ are positive integers) as $b$ added $a$ times?

You asked for an official document, and I can't give that. But I will try to speak for the teacher here. I don't agree with deducting points, but want to point out that the strategy of identifying axb with b+b+...+b (a of them) may be useful for students.

Mathematics generalizes, but it is helpful if it starts with something concrete. If some of the kids think 5x3 means 5+5+5 and others think it means 3+3+3+3+3, then it may be hard for them to discuss the ideas with each other. If they all start from the same place, and are led to notice that these two different sorts of problems always end up with the same answer, then they get to discover commutativity, instead of having it forced on them. (What I remember of the 'new math' of the 60's is having to write "this is true because multiplication is commutative". Gag.)

[Some kids will already have thought about this, and will already feel that both are the same. It will be hard for those kids to be put back in a box. With my bad memory, I would never remember which way was "right". That's why they shouldn't have points deducted.]

My friend wrote a great couple of blog posts referencing this. His niece thought of multiplication this way. He later saw the classwork behind that. In the comments on that post, he and I discuss the merits of this approach.

Although my friend is in New York, the school he references at his blog turns out to be in Connecticut. For New York, on this site you can find: Common Core Learning Standard 3.OA.1: Interpret products of whole numbers, e.g., interpret 5 x 7 as the total number of objects in 5 groups of 7 objects each. For Connecticut, I'm not sure.

While there may be legitimate reasons behind the convention

the larger issue is the mismatch between the teacher's enforcement of that convention and the expressly stated purpose of the formative assessment, which is written at the top of the very same page:

I can use multiplication strategies to help me multiply

I know this is not directly an answer to your question, but this teacher clearly does not understand what "Formative Assessment" means, nor what this particular formative assessment is meant to assess.

However I doubt there is any real standard. For what it's worth Wikipedia disagrees with itself.

Personally, I am very used to thinking of $a \times b$ as $b+ \dots + b$ as it lines up with scalar multiplication in vector-spaces (or more generally the fact usually modules over commutative rings are written as left-modules).

Of course (1) this is a pretty specialized topic which is very distant from elementary school math and (2) the decision about which way $\alpha \times \beta$ should be defined was arbitrary in the first place. But it is a nice example of how issues that seem like philosphical hairsplitting on a lower level can actually matter if you get far enough into math.

I would like to suggest a (English) language based approach:

"I went to the store three times." (Should be totally clear).

"Three times I went to the store." (Still clear).

"I went to the store times three." (Maybe understandable, but rather odd).

"Three I went to the store times." (Doesn't make much sense).

Upshot: The number modifying 'times' wants to go before rather than after 'times'. Thus the number before times says how many occurences; while the other element says what is repeatedly occurring.

I am not a math educator; however I wonder if at times it might make sense to use the commutative law first before expanding the terms. Please solve

However the Teacher may prefer the student use their method for this operation.

And in reality, this only matters at all for a very brief time until they realize that multiplication is commutative, so I kind of feel like you can pick whichever convention you want and if it conflicts with anyone else's convention you can just argue that they're effectively equivalent.

Not the answer you're looking for? Browse other questions tagged notation arithmetic-operations or ask your own question.

4
Proper ordering of phrase "multiplied by"

22
Students using ambiguous notation
10
Is this example of Leibniz notation sloppy?
10
Notation of points with coordinates
20
How students write their work, and learning outcomes
10
Notation for change of basis matrix
5
Notation in the definition of matrix multiplication
32
Allowing nonstandard mathematical language and/or notation
5
Undergraduate Vector Calculus Notation Mess
8
Question about function notation
2
Is there a name for this method of column addition and subtraction?