At the same time, it seems to be very rare for 8th grade students to be able to answer questions like $$ \log(100) \,=\, \text{?}\qquad\text{or}\qquad \log(10\text{,}000) \,=\, \text{?} $$ Indeed, students don't usually learn anything about logarithms until Algebra 2 or even Precalculus. One result of this is that calculus students always seem very comfortable with square roots, but have a very shaky knowledge of logarithms, even though the two concepts have about the same difficulty level.

So my question is, why the unequal treatment? Is the idea that square roots are somehow more common or more useful than logarithms? Or is there something that's harder about logarithms that I'm missing?

The appendix A in the Common Core State Standards for Mathematics seems to agree that traditional curricula put logarithms somewhere after Algebra I. CCSSM isn't a curriculum, and it doesn't suggest teaching logarithms later, it just offers "pathways" that are supposed to help districts using traditional curriculum find a way to meet the standards. I mention it just to show that, yes, this seems to agree that a traditional time to introduce the subject is later than Algebra I.

The Massachussetts Curriculum Frameworks put logarithms into "Algebra I" under a category like "Functions." Although this is also considered to be "Common Core Aligned."

One short answer is that "it's traditional." The order you describe is seen as early as 1898 in Bull Wentworth's New School Algebra. (Donoghue, 2003)

Reform curricula have come up against this time and again. Sometimes, the way we do things in math education are traditional and people don't want to question them, even in the face of evidence.

While I think you have a good question, perhaps a more forward-looking question might be whether we can find reasons to teach logarithms earlier.

Squares and square roots are connected to a particular 2D representation (squares) that can be used as a model for multiplication. It's popular for assisting students beyond the tenacious idea of multiplication as repeated addition. A representational leg up like that may be (just speculating here) one convenient reason that squares and square roots can be placed early in a curriculum "pathway." I'm really only guessing here; IANACD (I Am Not A Curriculum Designer). But I doubt that's a hard and fast rule that cannot be broken. Some people have successfully introduced algebraic thinking to early grades students (Smith III & Thompson, 2008). Although getting students to reason algebraically is a little bit different (in intention) from introducing a particular concept or operation at a different time.

Early on, the study of logarithms and logarithmic tables was incorporated into trigonometry. For more on this background from the perspective of the history of trigonometry education, search through the following dissertation for the word logarithm:

Example: You can find a book from 1914 entitled "Trigonometry with the Theory and Use of Logarithms."

Here is an excerpt: 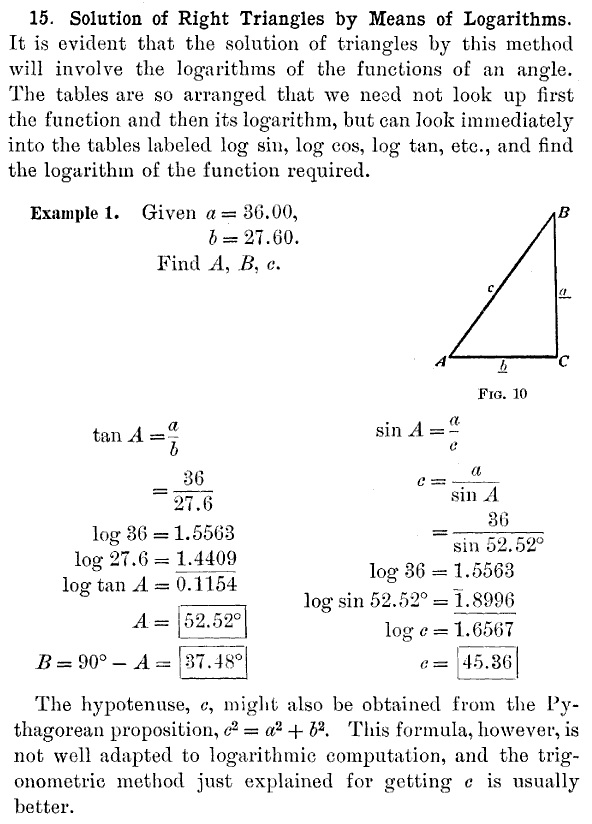 At the least, the author seems to realize that finding the hypotenuse using the Pythagorean Theorem is more sensible; but it is strange that this would even need saying. JPBurke's informative answer mentions Eileen Donoghue, which made me wonder about the history of logarithms with regard to the New York Regents. (Donoghue is an excellent source for historical information about curricula, textbooks, and the Regents in particular; I mentioned the same 2003 article by her in an earlier MESE post.) It seems that four years after the above-mentioned book was published, a 1918 article in The Mathematics Teacher argues that logarithms should be learned in intermediate algebra, rather than "consigning" it to trigonometry.

The citation for this article is:

A free copy of the article can be found here, from which I quote:

The introduction to logarithms is placed in intermediate algebra. Consigning this topic to trigonometry has several disadvantages. Many students who carry their mathematical study through the course in trigonometry seem to get the idea that the usefulness of logarithms is confined to trigonometry. Those who do not reach trigonometry lose what is at once an important tool and an elegant system. In the separation of the treatment of exponents and logarithms the theory seems to contain a discontinuity. The laws for commensurable exponents are carefully proved and then the theory of logarithms is made to appear to rest on that of exponents. But most of the logarithms used are incommensurable! The plan here proposed is to introduce incommensurable exponents with reference to the continuity of an exponential curve and to pass immediately to logarithms.

The author also cites a separate document arguing that logarithms be studied along with exponents:

[A report] of the Committee on the Teaching of Mathematics to Students of Engineering, calls for the teaching of logarithms in logical connection with the subject of exponents rather than with trigonometry.

This report is foot-noted as:

"Syllabus of Mathematics," Society for the Promotion of Engineering Education, 1912.

but an APA citation is:

American Society for Engineering Education. Committee on the Teaching of Mathematics to Students of Engineering. (1912). Syllabus of mathematics: a symposium. New Era Printing Co..

The report can be found on google books; here is the relevant excerpt:

Evidently, the study of logarithms within trigonometry is widespread enough by 1912 to warrant comments from a group of engineering educators. For now, I will not pursue the connections between these two subjects any further, but I would not be surprised if the disentangling of logs from trig resulted in the former being placed later in the curriculum than you might consider ideal from a more modern perspective.

Anecdotally, my father's generation (1950s-60s, UK) all learned logarithms in primary school and used them extensively for calculations. All children had their own slide rule which they carried with them and used in classes other than maths classes. There were no electronic calculators. My father became a radar engineer.

My generation (1980s-90s, UK) only touched on logarithms around age 14. We used calculators. My father explained to me early on what logarithms were and what they were useful for in a way that made sense to me at a young age ("they turn multiplications into additions, so the calculations are easier. I guess you kids don't need them as you have calculators."). This still left me with an air of mystery regarding logarithms and that they were an 'old-fashioned' way of doing things. Such a shame. I wish I'd learned logarithms back then. Now I'm a software engineer and logarithms are often useful. I often discover new ways to apply them.

I am resolved to make sure my kids learn logarithms even if I have to teach them myself. That and dimensional analysis.

Not the answer you're looking for? Browse other questions tagged secondary-education curriculum or ask your own question.

17
Was there an SMSG (New Math) "Algebra 2" text?
11
How best to explain the logarithm to the mathematically naive?
16
Worldwide collection of final examinations in mathematics
11
Pedagogical considerations behind current order of presentation of trigonometry
11
What do the Common Core Standards expect secondary students to learn about logarithms or the number $e$?

35
Why are triangles so prevalent in high school geometry?
38
Effects of early study of advanced books
13
How early to start "abstract" math education, or, How to prevent smart kids from never getting exposed to math?
14
Why do we teach calculus in high school rather than a different math course?
17
Should my 8th graders see a proof of the Pythagorean Theorem?
22
How do I nicely tell my coworkers that they are NOT mathematicians?
29
What fraction of the population is incapable of learning algebra?
11
What do the Common Core Standards expect secondary students to learn about logarithms or the number $e$?
6
At what point in the curriculum should the tensor product be introduced?
40
Why is learning mathematics compulsory?