Should students in a first university linear algebra class be taught to write simple proofs?

I am teaching an introductory linear algebra courses for undergraduate students in math, computer science, or data science at a liberal art university. Most of the students have not decided their major yet. But the majority will take the CS or DS route, with a tiny minority taking a math major. For math students, or any one, this will be their only Linear Algebra course.

While giving students a lot of exercises in computing, I also give them assignments and exam questions asking for simple proof. Usually these takes very little effort if they understand the definitions.

When I mentioned this to a colleague, he says this is pointless and it is enough for students to understand the concepts and be able to compute things by hand.

My rational for doing so is that most basic linear algebra computations can be done by computer very easily, so there is not much students can get from computing, say an inverse of a matrix. By asking them to write arguments formally, they could learn a bit about how to explain a technical point formally.

Am I just being naive in what can we expect from students? What should we teach students in linear algebra?

I enter this as an answer, rather than as a comment, because I think it is a useful re-framing of the question.

That is, for practical mathematics... do we want to be able to walk across a room, while chewing gum, and talking, and go through the door without banging into it... or do we want to have people worry about the very possibility of doing so, and think that they need to be able to prove (how?) that they can do so before simply walking out the door?

I do seriously claim that all too often mathematics education comes down on the silly/wrong side of such distinctions. :)

EDIT: in response to @David Steinberg's reasonable objection: for example, to prove/claim that the cardinality of a basis for a vector space is well-defined... Well, ok, yes, the proof has some interest, but its methods are much more exotic than the (apparent) nature of the assertion itself.

Not only in "linear algebra", but many other parts of mathematics, an interesting/discomfitting aspect is that proofs of heuristically necessary, and plausibly correct, ... things are much more sophisticated than the assertion. For me, this is interesting, but it does create complications in math education, for sure. That is, being completely sure that obvious-looking things are ok is often a much fancier thing... Telling novices about these (interesting!) fancier issue necessary to justify their computations should be a small thing, not the main point, at all.

Should students in a first university linear algebra class be taught to write simple proofs?

The key distinguishing hallmark of mathematics (relative to other subjects) is proof, that is rigorous deductive reasoning. I'd be sad to think that any "first university" mathematics course, or any "linear algebra" course did not have some component of proof, or the goal to help students appreciate the value of proof.

I teach a first university course of linear algebra (in the UK) to over 900 students p/a, about 1/3 of whom are mathematics students. The rest of my students are computer science, physics and engineering. If I don't "set out the stall" for the nature of mathematics who will do this? For specialist mathematicians (compared to computer science, physics and engineering) they need to understand proof. The rest might not be bothered about proof, but they should learn enough about proof to recognise it, its value and the nature of knowledge it provides. Computation is important and so I try to maintain a balance. Proof at this level is not the same as proof in a graduate research paper, and different proof styles serve different purposes. I try to be kind to my students, without betraying the subject.

Linear algebra is a very rich and diverse subject, and does not get the same recognition that calculus gets for the complexity of the decisions instructors have to make. This is a really great book if you can get a copy.

What you should teach in a linear algebra class depends on your audience, and while I agree with other answers' sentiments that you should emphasize concrete aspects / applications, the fact that you are teaching this course at a liberal arts school to students who have not "officially" chosen their majors yet may give you more latitude to include some proofs in the course.

That students have not chosen their majors has both positive and negative implications for emphasizing proofs. On one hand, there are surely students who know their majors even if not yet declared, and some of these eventual CS/DS students are expecting your course to be a service course that will ultimately serve them well in more applied settings. On the other hand, students who are contemplating math as a major would be well-served by some exposure to proof given the stark differences between high-school and more advanced mathematics.

Being at a liberal arts school lends additional credence to the idea that all students, math majors or not, expect their education to include a broad exposure to the general, lofty aims of many academic disciplines; the students might be more receptive to the argument that they need to "appreciate mathematics" than a population at a large state engineering college would be.

One concept that is quite important in geometric computations is the cross product, and in particular, how to compute the signed area of a triangle. 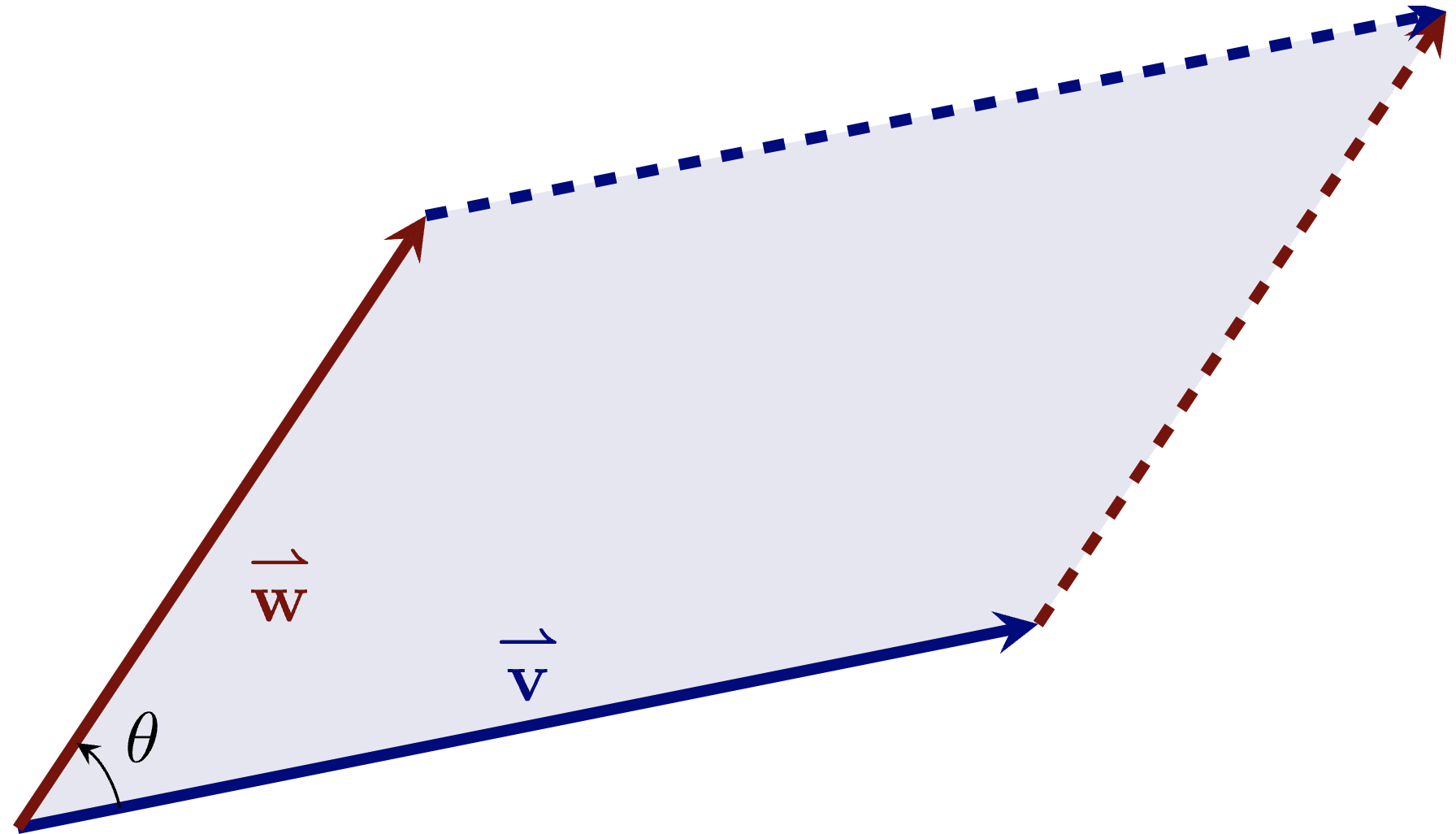 The length of $v \times w$ is the area of the determined parallelogram, twice the area of the triangle given coordinates of its vertices, positive vector up and negative down. This is a fundamental calculation for computing the convex hull of a set of points, for example. Another application is computing the area of a simple polygon by summing the signed areas of triangles determined by each edge and one fixed point—the so-called "shoelace algorithm." This generalizes to computing the signed volume of a tetrahedron, and the volume of simplices in higher dimensions.

45
What should be included in a freshman 'Mathematics for computer programmers' course?
30
What are non-math majors supposed to get out of an undergraduate calculus class?
15
How to get students in a under-graduate linear algebra course interested in determinants?
16
How to invite humanities students to study mathematics?
18
Why do some linear algebra courses focus on matrices rather than linear maps?
9
Computing eigenvalues by hand without determinants
4
Should I gave a make up lecture if some students found what I taught is a bit unclear?
4
Tips for teaching mathematics with experiments?
3
What kind of general advice for studying math we can offer undergraduate studens who do not major in math?