I have to do a teaching demo on the following:

Please treat the committee as students in your Calculus II class. Please take 12-15 minutes to introduce your lesson on the Taylor Series and its applications. Take the final two minutes to indicate how you would finish your lesson for the day 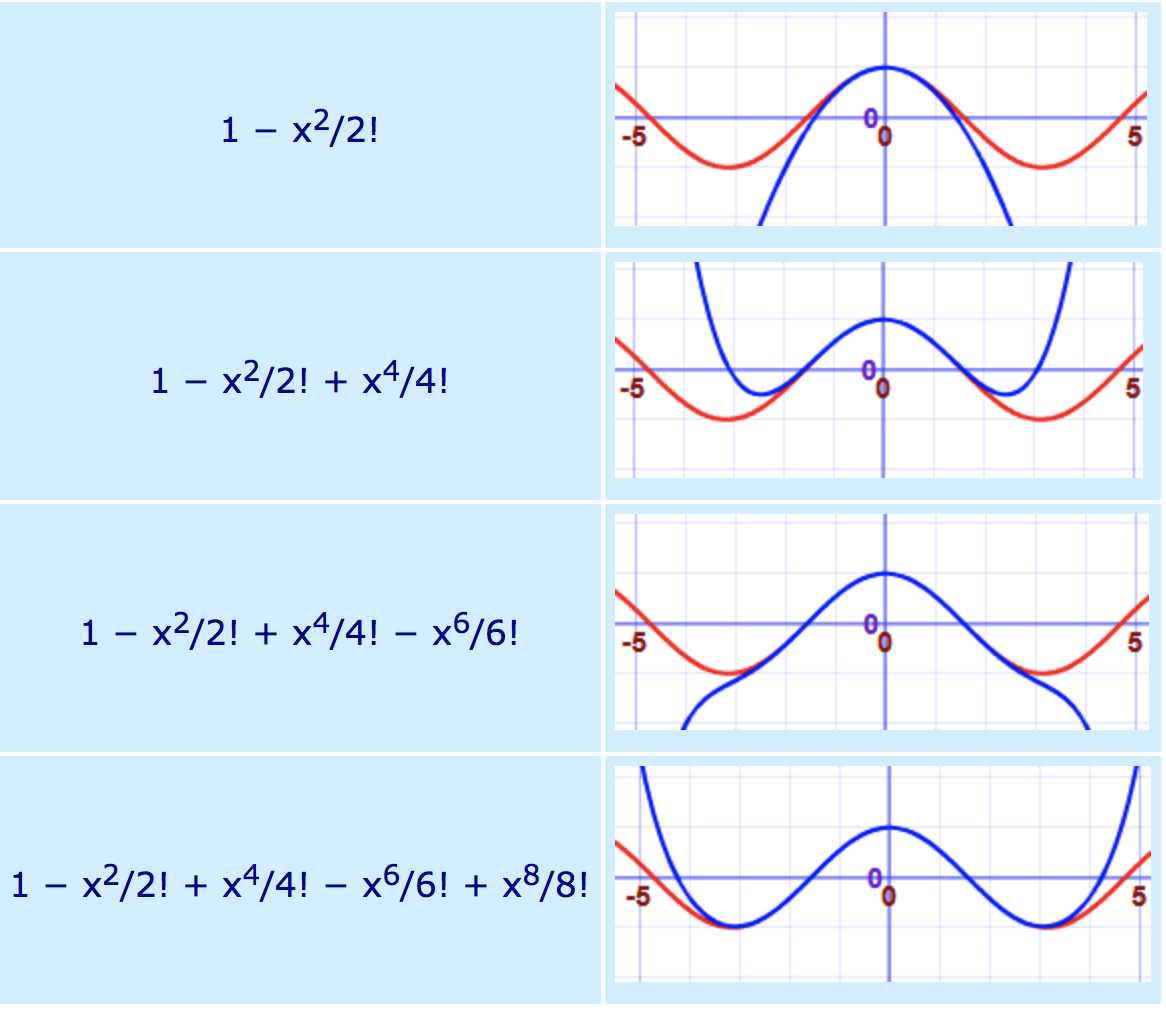 Your intuition is correct that this is far too much for a 12-15 minute lesson. The committee knows that there is no way you could deliver a whole lesson, even an introductory one, on this topic.

Since you've only got 15 minutes, plan to use it to spark interest in the topic, knowing that you're only showing the committee the very beginning.

For example, why not show students the cosine function on a small interval around $x=0$, and ask them what polynomial it reminds them of? "Does it look like some kind of $x^2$ or $x^3$?" Let them decide which one, and then graph their guess on top of $y=\cos(x)$. You will have the opportunity to discuss the vertical intercept and the width of the graph – that it can be adjusted (by multiplying a term by a constant). In this way, your lesson could start as a game about building the cosine function from simpler functions, and students will be involved in the guessing process. I see this occupying up to 5 minutes. Then do your steps 1 and 2, and you're probably out of time.

In my opinion, using your lesson time to draw on your students' previous experience with trig and power functions helps them see that they are already capable of doing much of the intuitive work leading to Taylor polynomials, and it validates that this new thing is something that doesn't have to seem like just applying another magic math formula.

You should definitely plan to tell the committee what else the lesson would include (if you had the time), but I also would tell them what they should already know. [e.g. "Hey, class...let's remember back when we studied graphs of power functions. Do you all remember how to draw the graph of $y=-x^2$?"]

You could considerably simplify this assessment (for an introduction) by asking them what just the first term of the series expansion should be. If you took the time to remind them of the "long-run behavior" of a polynomial when you discussed the cosine function, you could let them use their calculators to determine what the 2nd term of the series expansion of $\sin(x)$ is.

Caveat: I'm just a random Internet poster, not an instructor, so take this with a grain of salt. And get some advice from blooded veterans.

B. Write out the entire 50 minute lecture, practice it at once, and write up a synthesis of the last 35 minutes. I suggest something like topic, time, key points, perhaps purpose (you can draw a 4 column table and fill it out in the 3 minute). Make it simple enough so that you can actually explain it in 2 minutes. Test yourself to see that you can (it is simple enough summary).

C. Your beginning should have some intro that is a little more motivational, less dry (1 is too theoretical). Maybe something like "sins and cosines are complicated and polynomials are easy so we like to change them into something easier to work with" Or "you will need this in physics" or whatever the practical rationale is for why this is in the curriculum (not too real analysis-y, please). [I do quite like 2, though.]

D. Remember that your target audience at a juco is not math superstars. They are a lower skill set than you or even than an AP calculus class. Good people who want to get through this to support their chem/physics class or nursing degree or what have you. They are looking to progress and get jobs or to transfer to lower level state schools (and then get jobs). Have some sympathy for this and for them (without being obvious or patronizing about it either).

E. I suspect the interview committee wants to see that you can manage time, organize your thoughts, are practiced, command the room, have some energy, etc. And can get through the topic without getting too tied up into every nuance. I think you have plenty of math chops and that will not be their main worry (that you know the topic well). Sure review the standard lesson and be absolutely up to speed on it (especially if they probe...but if they don't, don't feel a need to flaunt.). But the objective is probably 20% math skill (and mostly about being above a skill threshold rather than how high above it). 80% is instructional ability...which is very, very strongly correlated to planning the lecture and practicing it at least 3 times. [Don't bother with that level of time investment when doing the job, except for first lecture, but definitely for the interview.]

F. Do a little reconnaissance and figure out what text they use. See how it addresses this topic and work the homework problems in that text.

G. Really this whole topic is a little bit of a pain for the student and not the most important material. Maybe even why they picked it. Show you can get the kids through the damned thing.

I'd take an entirely different approach, though the faculty that is assessing you may not view it favorably.

Mathematicians tend to view the logic of math as intrinsically beautiful.

The vast majority of people do not. The vast majority considers math to be hoop jumping and weirdly arbitrary rules that must be followed to get check marks. They have no idea why anyone would care about formulae.

Simply telling students "Taylor Series are important!" does not motivate them. Glossing over it or lecturing them for a few minutes on it will also fail to motivate them.

To begin addressing this, I would use intellectual need to motivate the students.

For example, in lower levels of math, one might teach fractions as part of a whole or something like that, or sections of circles, or naming amount of food. Or, you could make them feel intellectual need by having them how they'd share 5 pieces of licorice among 3 kids and name the amount each kid got.

In the eyes of most mathematicians, the average person, including college students, have shockingly little interest in the logic of math because they just want to get answers and check marks. So, what will you do to make them feel the need for a Taylor Series?

Check out the work on "Intellectual Need" in math education.

The risk: The "Curse of Knowledge" unfortunately, implies a very high probability that the people assessing you assume that students will intuitively understand that Taylor Series are interesting and important, and thus just need to be told so. Experts, very frequently, are shocked to find out that basic concepts, such as why anyone cares about Taylor Series, completely fly over the head of students who ace quizzes and tests on Taylor Series.

Not the answer you're looking for? Browse other questions tagged calculus community-colleges or ask your own question.

14
Community College Remedial Mathematics difficulties for students
2
Student-friendly / efficient approach to computing Taylor coefficients of infinite binomial series expansions?
9
Are there any proofs of Euler's Formula that do not rely on calculus?