Could this visual explanation of horizontal shift be helpful ? ...( if not beautiful...)

With the image below I try to explain in which way substituting (x-a) ( with a> 0) for x in the expression defining a function results in a shift to the right, although " intuition" tells us it should result in a shift to the left. To do this I use the auxiliary idea of "shifting" as "copying" or "imitating".

I would be interested in knowing whether this explanation could be efficient in the classroom at the high school level. 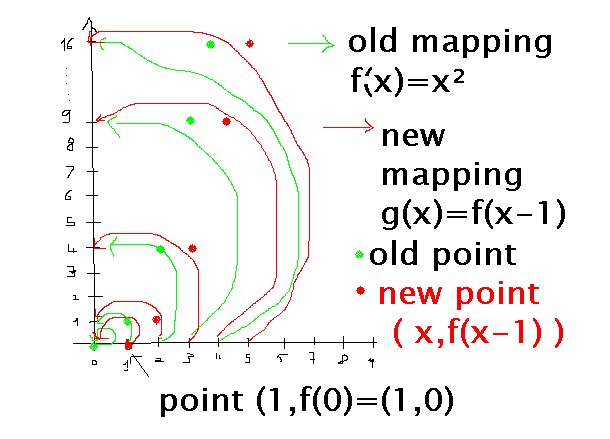 I tried two other ways along the graphical representation you are proposing.

Fill them out together with the pupils and let them observe that all the values of $g(x)$ are shifted by one to the right. Let them think about why this is the case and how they can get the values of the third line from those of the second line.

Both methods can (and probably should) be used together with the graphical representation as in the original question.

27
How does one explain that transformations 'inside' a function operate in the opposite direction than intuition suggests?

4
Is This Trick Helpful?