I recently learned how to use a slide rule and I have since been wondering why they are not commonly used to teach properties of logarithms. It seems that they are very clear examples of the $\log(a) + \log(b) = \log(ab)$ rule and several other similar ones. This seems like a concept that many students struggle with, and the slide rule seems to provide both a visual and possibly even kinetic representation of it. I have not yet seen an application of slide rules in the classroom despite the obvious usability for logarithms. Is there a reason that they are used so uncommonly? (or am I simply oblivious to the slideruling masses?)

Anecdote: For some years I've been trying to get my hands on a slide rule and I can't find any vendor who sells them.

This highlights the fact that for general purposes the electronic calculator has made the slide rule defunct, to the extent that I don't think anyone even manufactures them in scale any more. So making them available in the classroom for a fairly limited exercise would be difficult.

Or to turn the issue around, the biggest reason historically that logarithms were taught in the first place was to support calculations using the slide rule (or equivalent tables). Granted that calculators have superseded slide rules, logarithms aren't even taught that widely anymore (I got them in high school in the late 1980's, but that was presented as an "optional advanced" topic then.)

However, there are web/smartphone applications that simulate functioning slide rules, so you might consider looking for those instead.

As Daniel's answer states, the most likely reason why slide rules are rarely used to teach logarithms boils down to them being hard to come by. As they have been replaced by electronic calculators, it is common for many educators now to have never seen one, or to only be peripherally aware of them. Many don't even think of including them in lesson plans.

However, this doesn't mean you shouldn't. In fact, if you have the time available, and you don't have a slide rule to hand, you can do something even better - have your class make them!

This doesn't take long (<20mins), and I personally find it a demonstration of laws of logarithms that is so obvious and intuitive that it seems almost "too obvious". You will need the following: 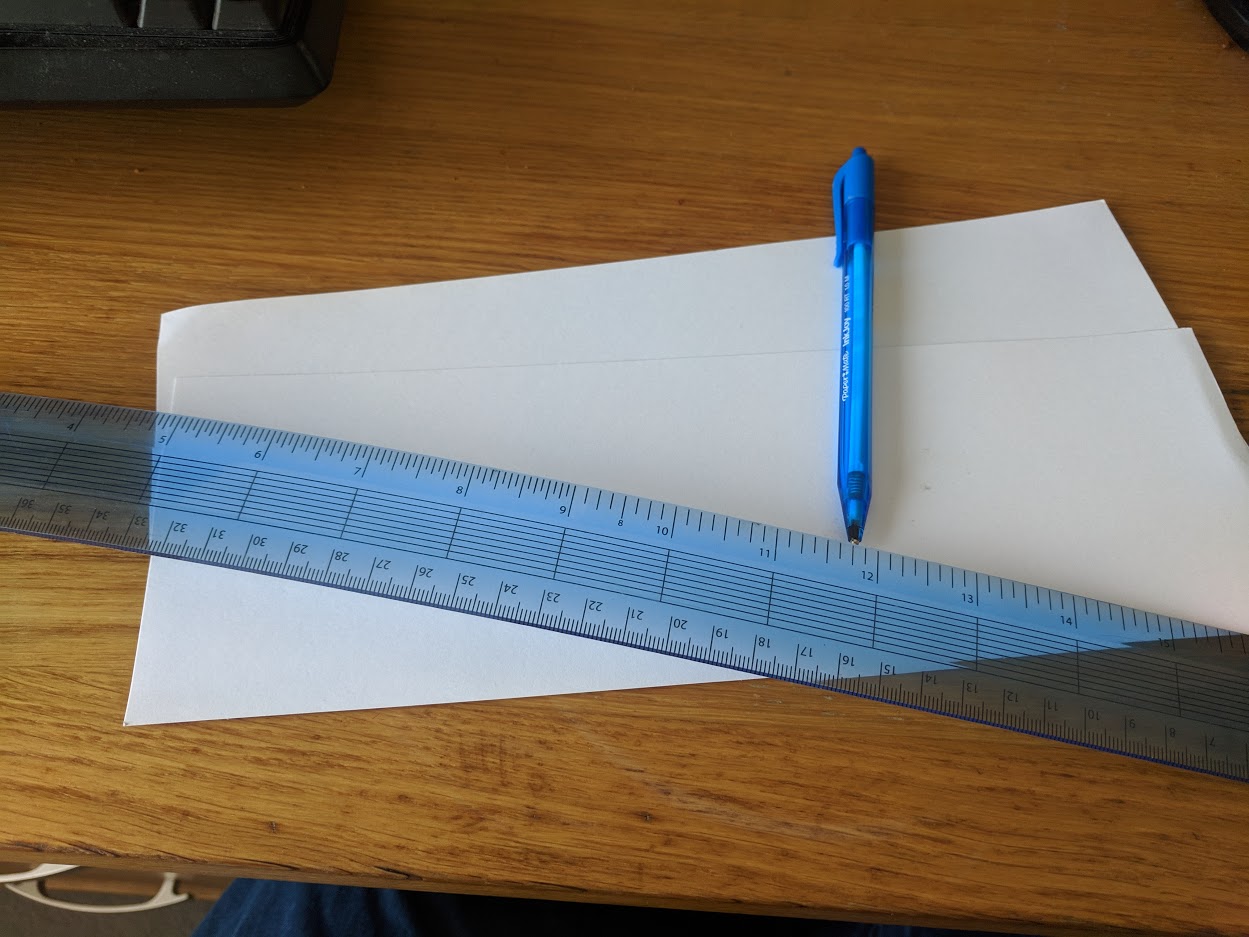 Now align both pieces, and make a mark along the edge every 2 cm (other graduations are available). Write a simple linear scale on the top and bottom piece such that each gradation is 1 added to the value of the previous gradation. 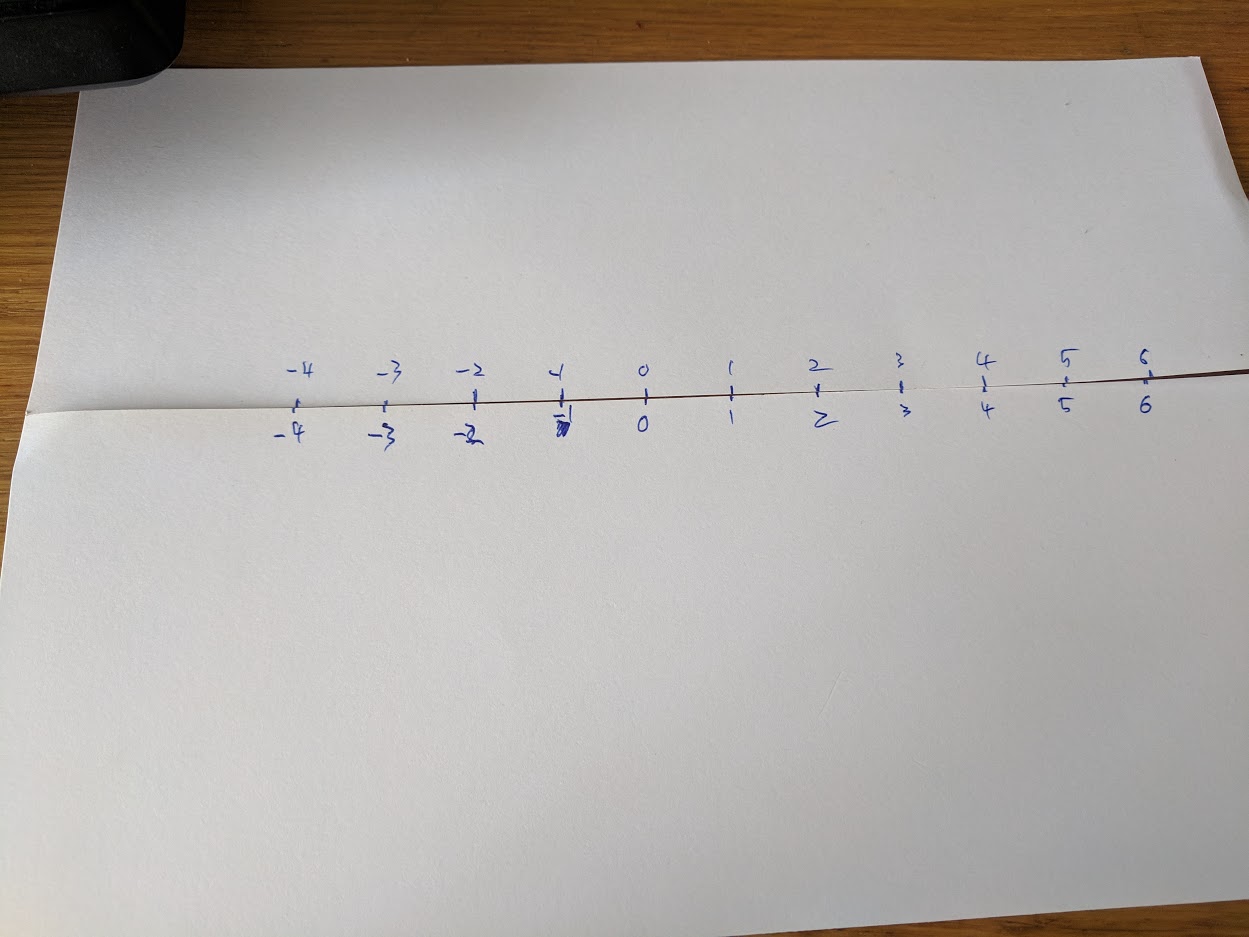 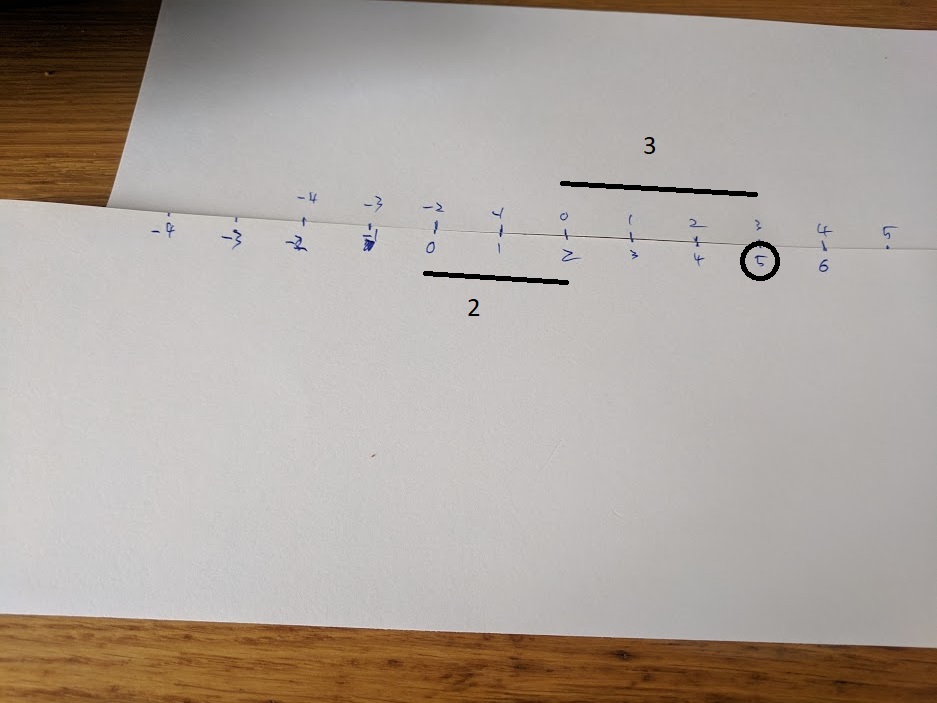 (annotations added in for emphasis)

Ok, at this point, who cares. We are only introducing the idea that two parallel sliding scales can add two values together. Now lets make a real slide rule.

Flip your pieces of card over, and make a new set of graduated scale lines. However, instead of incrementing by one each time, multiply by some base. I use two. It is worth pointing out that this is a logarithmic scale and each entry is just the linear scale value, raised as a power of two.

I think it helps to make a larger mark for the $0$ line, and to write $2^n$ above each graduation. 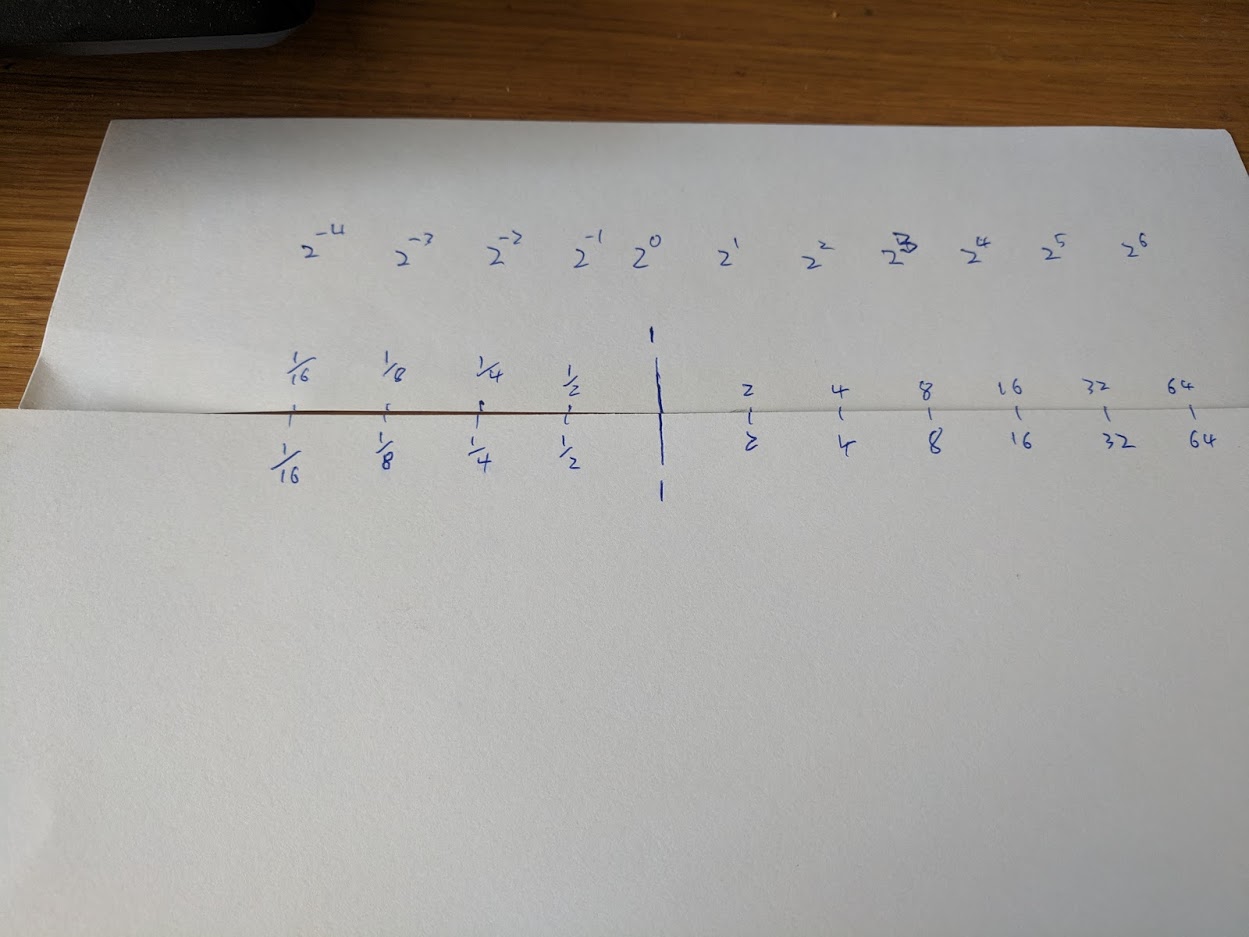 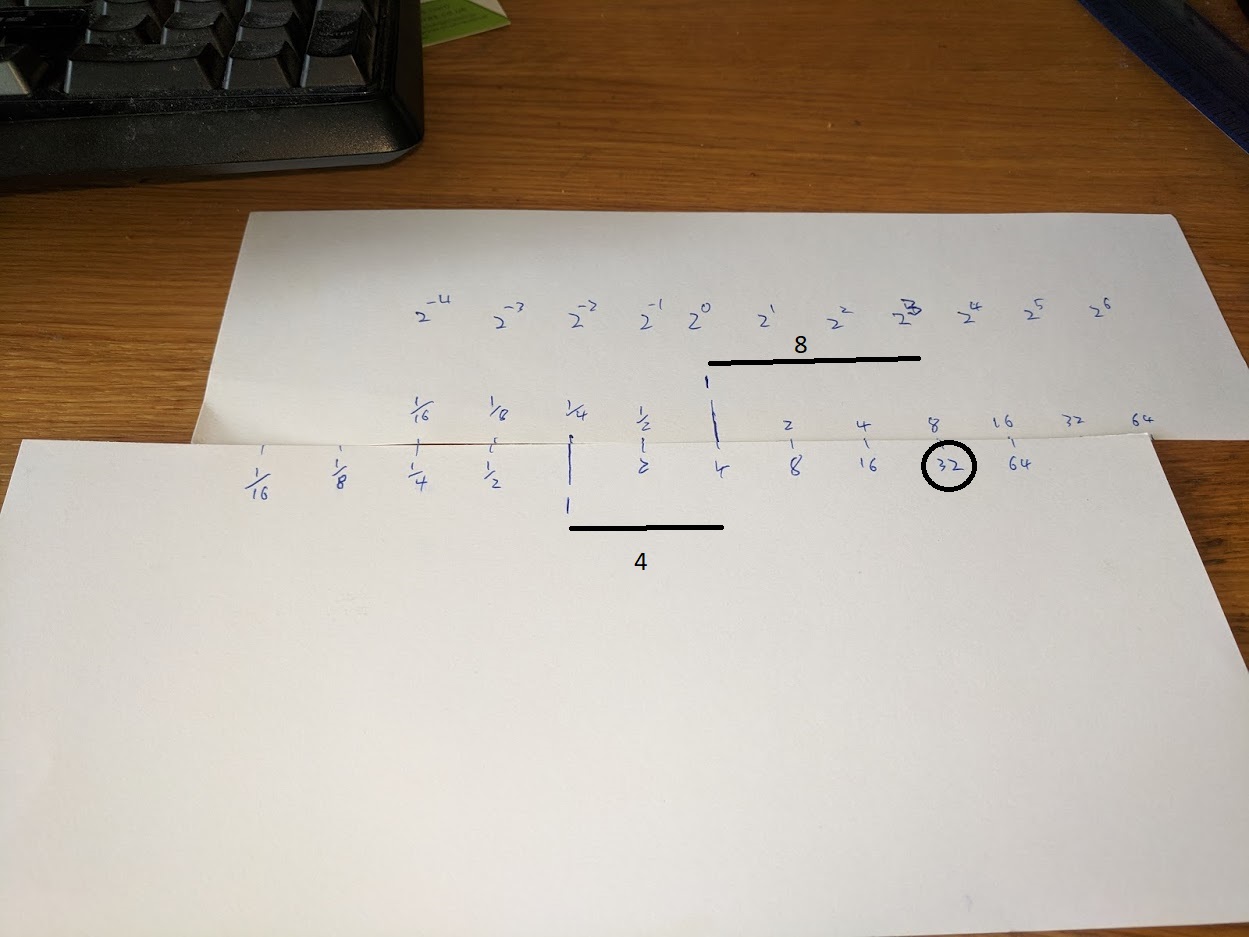 Congratulations, you have now made a simple slide rule, and used it to demonstrate the first law of logarithms. The action that we performed is the same "addition" action we performed with the linear scales, but instead of adding, we ended up with a multiplication, because our scales are logarithmic.

If you have more time, you can use this to explore further concepts:

Use printed log tables instead. You see the patterns more clearly than with a calculator or a slide rule. We learned how to use them in chemistry class--they were still provided on the AP chem exam until the late 90s.

In addition, instead of needing to remember, prove or the like the addition of logs, you are DIRECTLY USING it, repeatedly. Nothing motivates belief and memory like actually having dependence on the property. Have a choice between manually adding logs from a table or doing the multiplication of the original numbers and it is a no-brainer which you go to. You also get very used to characteristic and mantissa.

I never used the log tables much after the 70s (calculators became cheap). But just that initial use in high school chem was very powerful for me. Much less cryptic than a button on a box or moving a ruler stick side by side. (It also set me up to use trig and steam tables and later Bessel function tables, probability tables, financial tables, etc. Just developing a facility with tables is good thing to have. You still need it.)

https://www.youtube.com/watch?v=VRzH4xB0GdM (more motivating and slick but not as quick to just show the tables)

https://www.youtube.com/watch?v=4ebnr_h4m7E (very hands on and practical, but heavily accented English)

To print tables for your class just zox the few pages out of your CRC. (Of course you have a CRC. No math/science person would not. Plus it is good for ganglion bashing.)

P.s. Please start with common logs, not Napierian. As a veteran scientist or mathematician, it is fine to use ln instead of log because we already know that stuff. But for kids just learning the thing for first time, base 10 is much easier. You see the exponents of 10, 100, 1000 etc. very clearly.

Not the answer you're looking for? Browse other questions tagged technology-in-education logarithm or ask your own question.

71
Whence the "everything is linear" phenomenon, and what can we do about it?
18
Does anyone teach logarithms via slide rules?
6
Favorite secondary math manipulatives?

7
Teaching by powerpoint presentation
16
Advice for Tablet/Stylus for Mathematics Teaching
12
Game or gamified application for teaching/learning secondary school mathematics
8
Tips for teaching A-level Maths/Further Maths students
11
What do the Common Core Standards expect secondary students to learn about logarithms or the number $e$?
7
In teaching mathematics, should one always follow some international standards such as ISO 80000-2?
18
Does anyone teach logarithms via slide rules?
16
Are there direct practical applications of differentiating natural logarithms?
3
Logarithms chronologically before algebra
18
How should I teach logarithms to high school students?