Consolidating three descriptions of a parabola in precalculus

I want to present these three descriptions of a parabolic curve to my precalculus class:

Showing students that the first and second descriptions actually give us the same curve isn't too bad: just draw a focus and directrix in the plane, take an arbitrary point that is equidistant to them, and show that the $y$-coordinate is quadratic in the $x$-coordinate.

But showing that these first two descriptions are the same as the third seems quite a bit harder. Does anyone know an intuitive way to show that the conic section description of a parabola gives us the same curve as the other two descriptions? I really want something brief but satisfying (so not necessarily thorough) so that my students don't just tune out. But every method I've seen so far has been a bit too involved to present to a precalculus class (like here), and I don't see an easy way to prune out some details of these methods. 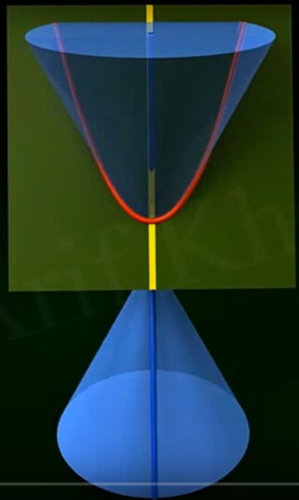 But it might be too long (one of your worries). In which case, I would use the Wolfram Demo Conic Sections: The Double Cone, in which you interactively manipulate the plane and rotate the image in 3D, and can spend as little or as much time as you'd like:

Not the answer you're looking for? Browse other questions tagged undergraduate-education secondary-education geometry precalculus or ask your own question.

21
Are there disadvantages to teaching complex numbers as purely geometrical objects?
9
How should exam scores correlate to final grades?
33
What to do when you get "the empty stare"?
19
A parabolic arc is not semicircular. But students think so
10
Teaching geometric transformations through fractals?
4
Determinant applications for 16 year olds
8
A more rigorous approach to Precalculus
2
On a special degenerate conic
5
Resources for improving computational skills at the high school/university transition
0
Best PreCalculus Textbook